Reading through Alexi Zentner’s initial oeuvre, from Touch to Zero Day, is a little like taking your elderly grandmother to the movies and realizing too late that Reservoir Dogs isn’t a tender story about animal rescues. His work is alternately tender and brutal, cruel and kind. He writes about the Canadian equivalent of flyby states and flyby people and the small beautiful parts of their lives that often get decimated by harsh family tragedies and merciless natural phenomena.

Zentner’s third novel, The Hatching, arrived in July 2016, although it wasn’t immediately recognizable as such. The book appeared under a pen name, Ezekiel Boone. The author photo was an edgier version of Zentner: scruff, dark-rimmed eyeglasses, the bucolic coast in the background of the first novels replaced by a brutal black shirt.

The Hatching’s focus was broader than his previous work. Instead of frontier courtship or sibling rivalry, the novel established a vast cast of characters, following a good dozen stories placed strategically in different locations across the world, switching from one installment to the next with the breathlessness and in-medias-res delivery of Lost.

When Zero Day, the conclusion of the Hatching trilogy, this will become more than an experiment. There will be more Ezekiel Boone thrillers in existence than Alexi Zentner novels, although elements of his more “literary” side can be still be found.  Zero Day, for all its bombastic explosions, still has the moments of quiet devastation and unexpected catharsis that was a hallmark of the Zentner’s early work

I spoke with Ezekiel Boone by email from his house in northern New York.

Matthue Roth: Both your literary novels and your—what should I call them, your populist thrillers?—they’re all about the struggle between people and nature. There’s a moment early in Touch where a father tries to rescue his daughter from an ice pond and ends up frozen inside with her, and the town has to wait till spring to thaw them and bury them. In the Hatching trilogy, we get giant spiders. Is there something about non-human natural disasters that make for useful antagonists, or do you just hate nature?

Ezekiel Boone: I always joke that the only way I can tell what I’m writing about is when a smart reader tells me. I guess I hadn’t thought about the books being connected that way. One of my first publications was a short story version of the first chapter of Touch (published in Tin House), centering on that scene, of the father watching his daughter fall through the ice and then trying and failing to rescue her. I was haunted by that image, of the two of them frozen under the ice, hands reaching toward each other, fingers not quite meeting.

With The Lobster Kings, my focus was on the family dynamic, of a daughter trying to succeed an almost mythic father. But you’re right: both of those novels are indelibly wrapped up in a landscape.

With The Hatching series, in all three books, nature is a visceral—and hungry—force. And now that I think about it, the next Ezekiel Boone book, The Mansion, is primarily set in a very remote, wooded area, where the natural world puts a certain kind of pressure on the characters.

If you live in a big city, it can be easy to forget how much weather matters, how much landscape matters. Small decisions can have big ripples. I still spend a lot of time outdoors—I’m headed to Yellowstone in about a week to go backpacking—but I used to rock climb. One of the things that terrified me about it was that the more I learned, the more I understand how close I’d come to almost getting killed when I was first starting out. As a writer, putting characters in those places and situations and then giving them slightly worse luck than I’ve had can be interesting. Or, you know, having hordes of flesh-eating spiders pop out of hibernation….

MR: The way we’re trained to think about stories, the plot grows out of our characters. In the Hatching books, though, you often introduce new characters, given them a stunningly brief biography, and then they summarily fall victim to their most significant fear or a fatal irony. Stephen King also does this a lot, these gorgeously heartbreaking single-page portraits that are followed by bedlam and bloodbaths. How do you feel about these plot-driven sacrifices? Are there any you wished you could hold onto?

EB: I end up loving almost every character I create. Almost, because some aren’t redeemable. But the creation of a character that feels real means treating the character like they are real, and having to let go of them because the plot demands it can kind of hurt. You have to do it, though. Both parts. You have to be able to create and destroy. Ideally, yes, they are “gorgeously heartbreaking” portraits that you paint quickly because you want the reader to care about the characters, to feel their breath. Otherwise, their death—or destruction or punishment or fear or even joy—doesn’t matter at all. And you have to let bad things happen to characters if you want an interesting book.

MR: What would you say—if you would say—is the difference between the Hatching trilogy and your first two novels? Was it just you getting inspired by a different idea that took you toward a different genre, or was this a conscious move toward overtly commercial fiction?

EB: The idea came first. I’m sure it’s different for different writers, but I’m pretty voice-driven, and my stories and novels usually come from a single image that I then build a world around. For the Ezekiel Boone books, it’s not that I consciously chose to move more towards overtly commercial fiction, but rather that those books happen to fall in that space. One of the freeing things about having this pseudonym is that I don’t have to worry about where my books are going to be shelved. I just write them. I’m in the middle of writing both a Boone book and an Alexi Zentner book right now, and it wasn’t a decision to write one of each, but simply that I’m writing two books, and it seems clear that one of them is more commercial, one of them is more literary.

MR: How do you split the two books up in your head? Is there ever any runoff between them? 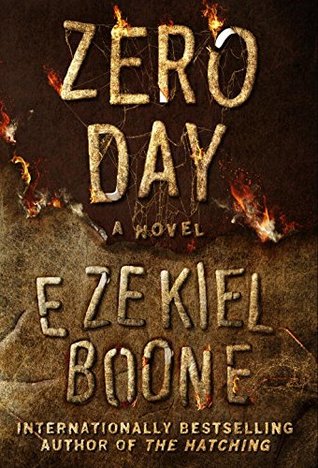 EB: The books are pretty different beasts. I’ve worked on two books at the same time before—I’m often working on multiple projects—and the only issue is that I can have so much going on in my head that I sleep poorly.

MR: Zero Day, the book that concludes the Hatching trilogy, relies on a dense web of plotting (sorry about that!) for its third-act payoffs. Did you map it all out from the start, or drop seeds and just see how they’d grow? What was your outlining process?

EB: My planning was somewhere in-between a true outline and dropping seeds. I had the books worked out, but in writing them, sometimes I realized that what I’d written was better than what I’d planned, and that changed the direction of things a bit. A few of the characters ended up getting more time on the page then they were supposed to, which was usually a function of me liking them too much to let them go. But given the scope of the books—nearly 1,000 pages and a huge cast of characters and locations—I had to know where I was going. Even if some things got changed along the way, I knew from the first word where the story was ending.

MR: Are you going to miss the Hatching universe? Do you think you’ll ever summon any of the characters for another story, or dip back into the sandbox?

EB: It’s hard to see myself revisiting The Hatching universe. I think Zero Day draws the series to a close. I’d love to go back, but at least for right now, I don’t see a natural follow-up.

The desire to return, however, is directly related to how much I liked the characters. I found myself rooting for them and worried about them even though I knew where the story was going.

MR: As a storyteller, you want every story you write to change the reader, but I think ideally, a story should change the writer as well. Is there a way in which the Hatching trilogy has changed you? Do you feel differently about spiders now?

EB: Spiders still scare the crap out of me. I’m sorry, but they are creepy. There’s a reason we are afraid of spiders, and writing about them eating people and bursting through your skin doesn’t make it worse.

As a writer, however, one of the things I realized is that I didn’t have to stay in my lane. I earned my chops writing short stories and literary novels, but I grew up reading genre, and it was wild to realize that it was something I could write. And that I enjoyed writing it. I think it helped me to grow as a literary writer as well. More tools in the toolbox.

Ezekiel Boone lives in upstate New York with his wife and children. He is the internationally bestselling author of The Hatching, Skitter, and Zero Day.

Matthue Roth is the author of the novel Rules of My Best Friend’s Body and the picture book My First Kafka. He co-created the personality of the Google Assistant, Google’s artificial intelligence. He lives with his wife and four daughters in Brooklyn and keeps a secret diary at matthue.com.