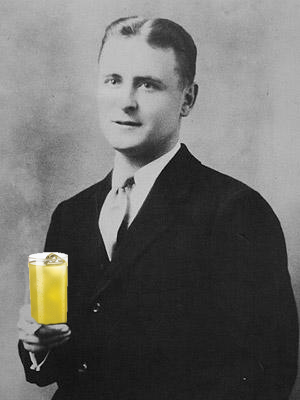 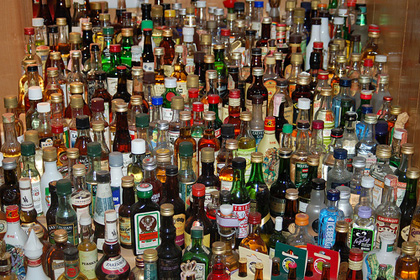 “It is time to get drunk! So as not to be the martyred slaves of Time, get drunk; get drunk without stopping! On wine, on poetry, or on virtue, as you wish.” –Charles Baudelaire

For many writers, it is important to get drunk. There are many reasons for this, and I’m a strong advocate for all of them. Unlike many in society, who float through cubicles and television marathons with little protest, writers are often plagued with taxing mental conflicts and the difficulties that come with creating an intricate universe on the blank page.Once they have navigated through this, writers face monolithic rejection on their way to honing their craft—often in the form of impersonal, formulaic letters.

It is no surprise then that writers face boredom with daily rituals and the tedium of their responsibilities. There are very few ways for a writer to escape the worlds they have created in their mind. Drinking is not the healthiest way to deal with this, but damn it, it gets the job done.

Some choose meditation, exercise or what have you; writers choose whiskey. Whiskey goes down quick and you don’t have to run in place surrounded by impatient behemoths. 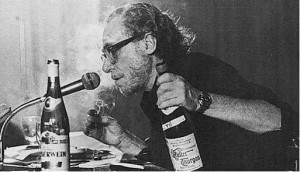 Writers choose to drink because of their inability to cope with the daily hassles of being part of a society. Why shouldn’t they? Every day an intelligent human being is plagued with bills, horrifying news stories and general idiocy that slowly grinds away at their psyche, breaking off pieces of it that may never fit again. If a writer needs to pour themselves a shot of that toxic tranquilizer, then at least they’ll make it through. It gives them something to look forward to during the day, and when they get it, they can stare at the bottom of that whiskey glass and tell themselves it might not be as bad as it seems.

There are degrees of this of course: a steady drinking habit versus full blown alcoholism, but the important thing is for a writer to maintain their cool in whatever way they can, preferably without dying in the process. It is true, drinking will probably kill you eventually if it gets out of control, but at least your book sales will go up afterwards. 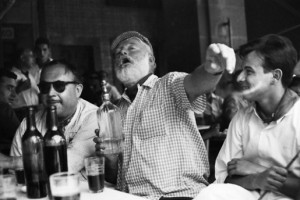 One should write while they’re somewhat drunk, as Hemingway recommends, to sleigh the demons all writers have in their head that make them hesitate during the writing process. When a writer hesitates, there is a vulture on their desk that picks all the good ideas out of their scalp as they trickle away. Hesitation is the effect of self-doubt, and there is no place for it in the writing process. A drunk writer will let the words flow unencumbered. The more thought that goes into a sentence, the more convoluted it becomes. If you are meant to be a writer, then you will know exactly how it is supposed to be. The time for polishing is when you’re sober and the words are already on the page, not during the creation.  A drunk writer often has ideas they never would have considered sober. There is a limit to how inebriated you can be and still work well, but a couple drinks usually do the trick.

Drinking may not be something a writer does during the writing process at all, but it is still often an important part of the larger picture. When you spend several hours a day writing, you need to clean your slate, and drinking can help accomplish that. Often times a writer will find themselves lamenting over what they worked on during the day, and then they are not adequately prepared to start fresh the next day. It is an important ritual to flush out concerns in the night, so one may be at ease in the morning. Drinking is the most direct and pleasurable way to achieve such a cleanse. 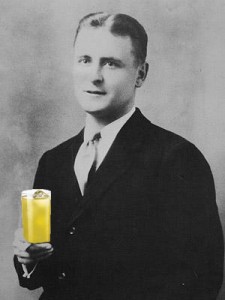 “I’ve been drunk for about a week now, and I thought it might sober me up to sit in a library.” –F. Scott Fitzgerald

A writer should drink for material. If you need to gain life experience that is interesting, you’ll find more luck being a little drunk. This is not to say nothing interesting happens when you are sober, but people tend to do more interesting things with their evenings when they have consumed a vat of wine. The main thing to avoid is drinking so much that you black out, because then you’ll have gained very little from it (unless you take detailed notes throughout your binge). Remember that time I went skydiving with a keg strapped to my back? Yeah. Neither do I. The other aspect of this is that you will likely make more honest observations of your surroundings, and yourself, when you’re not stuck in your usual flow of consciousness. The same can be said for your readers, who will most likely be reading your work while inebriated.

A drunk writer often finds out things about themselves when drinking that they may have ignored in their usual mindset. I have encountered many instances when I’ve realized something was floating in my subconscious because I was a little more honest with myself after a few beers. Once you recognize these things, you can write about them. There are many ways to achieve this, but drinking is definitely one of them. Some writers will even realize they’re not a very good writer, and more power to them.

“I often like working with a hangover…because my mind is crackling with energy and I can think very clearly.” -Francis Bacon

A writer should drink for the hangover. Not only do hangovers show us a different state of mind, but they teach us about suffering. No writer can express what pain is unless they feel it regularly. There is something about the throes of a vicious hangover that not only helps you to understand what it is like to have lost all hope, but also inspires you to put your dukes back up.

Thor Benson is a traveling writer currently located in Portland, Oregon. He has had his short stories featured in magazines like: Citizen Brooklyn, Black Heart Magazine, Empirical Magazine, The Conium Review, FictionBrigade and more. Benson currently freelances forVice Magazine, DailyKos, Oregon Music News, The Portland Mercury and more. He can be found at a run-down whiskey bar.