Remember that car ride to Sea-Tac, how your sister’s kids
played a frenzied game of Would You Rather, where each choice

ticktocked between superpowers and towering piles of a food too-often denied,
Would You Rather

have ﬁery lasers that shoot out of your eyes or eat sundaes with whip cream for every meal?

We dealt it out quick,
without stopping to check ourselves for the truth.

We played so hard that I got good at the questions, learned
there had to be an equality

to each weighted ask. Now, I’m an expert at comparing things
that give the illusion they equal each other.

You said our Plan B was just to live our lives: more time, more sleep, travel—

and still I’m making a list of all the places
I found out I wasn’t carrying a child.

At the outdoor market in San Telmo, Isla Negra’s wide iris of sea,
the baseball stadium, the supermarket, the Muhammad Ali museum, but always

the last time tops the list, in the middle of the Golden Gate Bridge,
looking over toward Alcatraz, a place they should burn and redeliver

to the gulls and cormorants, common daisies and sea grass.

Down below the girder that’s still not screened against jumpers,
so that it seems almost like a dare, an invitation,

we watched a seal make a sinuous shimmy in the bay.

Would you rather? Would I rather? The game is endless and without a winner.

Do you remember how the seal was so far under the deafening sound
of traffic, the whir of wind mixed with car horns and gasoline, such a small

speck of black movement alone in the churning waves
between rock and shore? 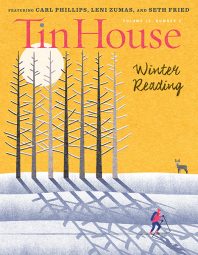 Ada Limón is the author of four books including Bright Dead Things. Her fifth book The Carrying is forthcoming from Milkweed Editions in the fall 2018.

In Support of Violence