Courtney Maum and I met in 2011 at a reading we were taking part in for Slice Magazine. I remember being pulled into her work (about a fetus nonetheless), the way a person is magnetized by sounds new to him—how her style traversed terrains of seriousness, levity, humor, and unabashed honesty. Maum’s debut novel I Am Having So Much Fun Here Without You tells the story of British-born artist Richard Haddon, who is reevaluating his career, his flapping marriage, and memories of his American mistress while living and working in Paris. When “The Blue Bear,” a painting Haddon had made out of pure love and anticipation for his child miraculously sells, these reevaluations conjure Richard into a rebirth of sorts, and Maum parses them with shockingly original intellect, humor, and wit.

Maum has been doing ‘writerly’ advice columns for Tin House for almost three years now, among them “6 Ways Reading Series Can Improve Your Writing” and “How Not To Hate Your Friends,” examples of her sensible approach to uprightness in others and her own writing. And, as if to give herself a playful pat on the back, Maum is responsible for the hilarious “Celebrity Book Review” series on Electric Literature, a refreshing, often mocking imagining of celebrities writing book reviews–my favorite is John Malkovich.

Maum and I shared words over email, and I was gratified by her openness and frankness with which she sees fiction and real life.

Matthew Daddona: In Roberto Bolaño’s Monsieur Pain, the narrator Pierre Pain describes a movie to us as he is sitting in the theater—the characters, plot, motivations, lighting. How much of your narrator’s art did you feel was worthy of describing while writing? Were there bigger descriptions of pieces that you tossed away?

Courtney Maum: Thank you for asking me a question that starts off with a Bolaño reference. I feel like we should be sharing a pisco sour now. I did get rid of a huge chunk in the beginning where Richard goes into great detail about his “key series” of paintings that feature former lovers. It hit way too early in the novel, and plus, Richard’s already told the reader that he’s been having an affair, so I didn’t think it was necessary to belabor the fact that he’s had LOTS AND LOTS OF SEX.

MD: Your narrator, Richard Haddon, is a likeable fellow, albeit one harboring remorse, guilt, and misplaced love. How hard was it to center these myriad of emotions? Given that he is your narrator, how were you able to balance what Richard tells us and the subconscious traits we pick up from him? 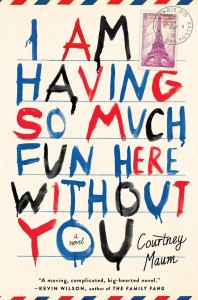 CM: I think that a lot of us have likeable assholes in our lives, but they’re so much easier to tolerate off the page than they are in writing. It was really hard to get the balance right with Richard. In the first draft of this book (which I wrote ten years ago), I failed: Richard was funny, but he didn’t have any remorse for his actions and thus it was impossible for a reader to feel any empathy for him. I feel like the published version is almost written in real time in that we are taking this journey with a man who goes from feeling proud of his wrongdoings to terrified of them and their ramifications.

MD: I love this line describing Lisa Bishop, your narrator’s mistress: “Lisa Bishop, evil colonizer of Englishmen’s hearts.” Your Paris setting automatically elicits a romantic feel–you say, “Paris at night is a street show of a hundred moments you might have lived.” Does Paris make it easier to write a love story? Or are there conventions you have had to rail against?

CM: The biggest convention I had to rail against was of the American in Paris. I think, subconsciously, that that is why I chose to make Richard Haddon British, so I could still take digs at the French and the Americans without the narrator having to identify with one of those camps. But I agree with you: Paris simply being Paris automatically imbibes the page with a certain romance, so I’m grateful to the city for doing some of my hard work for me.

MD: Work means a lot to your characters, especially, I think, to Richard’s wife Anne, whose reliance upon her husband’s success, opinion of himself, and happiness informs how she thinks her family is holding up. How do art and “work” inform one another?

CM: I want to answer your question with a question: why the quotation marks around “work?” I think of work as something you are paid to do, and I think of art as a passion. Rare and fortunate are the few who get to have these two realms overlap—and Richard Haddon does. But the thing about art—whether it’s visual arts, literature, film, or another genre entirely—is that art in itself is unreliable as an income generator. Tastes change. Trends change. And desires change within the artist himself. We see this in Richard who becomes disgusted by his most commercially successful work. Many artists have an internal gag reflex that goes off when their work starts to earn them money. We want to be successful, of course, but there is a certain cachet that comes from being the underdog.

MD: Your writing is sharply perceptive, and often very funny. When does Courtney Maum say, ‘Okay, now it’s time to write a funny line or scene, and now it’s time to sit up straight and be serious?’

CM: The readiness for a shift change is actually ruled by my ear. I think of writing as a musical composition, and the former pianist inside of me can feel when it is time for a piece to get lighter or darker. That being said, I’ve put two jesters in this novel: Dan and Dave. The minute they arrive you know you’re in for a little comic relief.

MD: You were living in France for a number of years, correct? Were you always researching? Or did you have to go back once you found your story and undergo a new research process?

CM: I lived in France for five years in my twenties, and go back every year because, being a clever girl, I went and got myself a nice, French husband. I didn’t research at all for this book the first time I wrote it. Back then, in 2003, I wasn’t professional about my writing: I didn’t research, I didn’t outline, I didn’t stress. I was very romantic and naïve about the process—I would wait until a mood hit me, and then I’d just start writing. But you can’t pay your mortgage by being verbally romantic! So now, I write like a goddamn professional. I research, I outline, I stress. When I returned to this project in 2013, I had to do a lot of research about the Iraq War because I know things about the conflict that Richard wouldn’t have—the story takes place in 2002, right before the war breaks out. 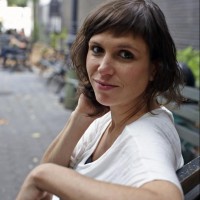 MD: The gallery owner, Julien, is a fascinating character. His riffs and rants and exhortations blow off the page with such speed and delight and, in many ways, he’s like a watchdog between Richard and his work, and Richard and his marriage. How did you conceive this character? How important is he to the novel?

CM: I think Julien is very important. Richard only admits to this once, but in addition to being his gallerist, Julien is his best friend. He’s his confidant, his ally, but he’s also his business partner, and that means that he gets to be unflinchingly honest when he thinks that Richard is making the wrong decisions in both his art and his life. To a certain extent, he’s Richard’s conscience.

MD: References are abound in your novel: literary ones like T.S. Eliot or Watership Down, current events like the Gulf War, and many cultural ones pop in and out. Were these items you were reading and watching or thinking about while writing?

CM: I am so grateful to have this opportunity to call attention to my little known and little understood college major: Comparative Literature. Studying how literature was affected by the art and film and architecture of the same time period trained me to always be thinking in terms of comparisons. I like using comparisons and references in communication—I think it brings us closer. For example, if I tell you that I had a weird Saturday night, that doesn’t mean much. But if I tell you that my Saturday night was like a French fry with no ketchup, a picture is painted.

MD: Is there a place you always have wished you could write about, but feared doing so?

CM: I’m obsessed with Mexico, and about the reasons why North Americans travel there. I started writing about this obsession in my chapbook, “Notes from Mexico” but just barely scratched the surface. I deeply, deeply want to live in Mexico City one day. But what are you going to do, you know? I’m thirty-five. I have a daughter now. I have this whole life. And what the hell do I know about what is really going on? It’s a naivety born of privilege to think that I can just go there with my computer and observe people and write. I don’t know anything about the real Mexico, the one tourists don’t see. So I have an attraction-repulsion thing going on with both the country and the feelings it stirs up inside of me.

MD: Would Americans and Parisians read I Am Having So Much Fun Here Without You differently? How so? How did this inform your detail-writing?

CM: I honestly have no idea how French people would read I Am Having So Much Fun Here Without You. French literature is elegant and quiet, and even humorous writers, like Anna Gavalda and Michel Houellebecq, manage to be funny in very discreet ways. This book is loud. It’s the difference between someone at a dinner party who is entertaining the whole table with a slightly drunken story and the person at the end of the table who is telling a very strange but funny tale to just one person to her right. My hope with this book is that Americans like it, and that the French end up liking it because Americans like it—which is how things have worked out for hamburgers and craft beer in Paris, so maybe I have a chance, too.

Courtney Maum is the author of the novel, I Am Having So Much Fun Here Without You.  The humor columnist behind the “Celebrity Book Review” series on Electric Literature, a frequent contributor to The Rumpus, and an advice columnist for Tin House, she splits her time between the Massachusetts Berkshires and New York City. She’s also the author of the chapbook “Notes from Mexico” from The Cupboard Press.

She is also largely responsible for the (now famous) karaoke night at the Tin House Summer Writer’s Workshop.

Matthew Daddona is a poet, fiction writer, and reviewer based in New York City. He is a founding member of FLASHPOINT and is editor of the Tottenville Review. His most recent writing has appeared in the Los Angeles Review of Books, Gigantic, and The Brooklyn Rail.

The Slippage: An Interview with Ben Greenman