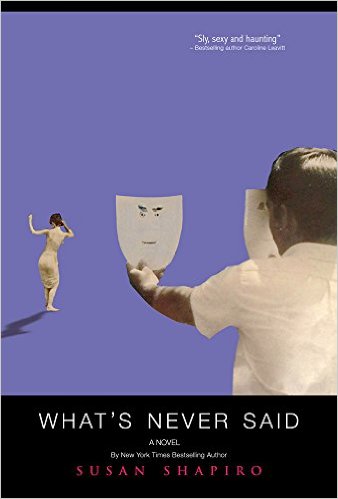 Bob Dylan said hearing Elvis Presley for the first time was like breaking out of jail. Walking into Sue Shapiro’s New School class was a little like that. She was passionate, effusive, and within minutes had extracted dark embarrassing moments from my past for her infamous first assignment: write about your most humiliating secret. I felt lucky to be one of the 15,000 students to study with her, in both my undergraduate and graduate programs, where she practically ensured that we all get published. Reading her new autobiographical novel What’s Never Said, is a captivating take on how we communicate, or miscommunicate, and how the words unspoken can imprison us.

What’s Never Said is about her own school days as an MFA student in New York and the romantic relationship with a professor who was her mentor that—she freely admits—haunted her for three decades. It’s the story she says she couldn’t write until now, and it seems a perfect time for this outrageously honest story.

Susan Marque: What was your motivation for this novel?

Susan Shapiro: I always tell my students to write about their obsessions. And a female mentor of mine told me “You write best about people you love,” which inspired my first book “Five Men Who Broke My Heart.” Because that was a memoir, I was limited in scope. I hoped writing a novel about passion gone wrong would be as fun and entertaining, but that fictionalizing would allow me to go deeper and crazier. I always say I’m a raging feminist who loves men and marriage. Being in therapy has really helped me be happy in work and in love, for almost 25 years now. Students have pointed out that a lot of my shrink’s wisdom is laced throughout the book. Daniel tells Lila that poetry is about what’s left out, what never gets said. I guess what intrigued me most was how two heroes, Lila and Daniel, never tell their spouses the truth of what happened between them, and they spend their life obsessed with words but completely miscommunicate everything.

SM: Like your character Lila, you have your MFA from New York University. So is What’s Never Said a love letter to your past?

SS: In some ways, yes. I love poetry, studied and wrote it for years. But I was a failed poet. I really did have a mentor who told me “You have too many words, not enough music.” He loved my memoirs and said “there’s more poetry in your prose than in your poems.” I liked the idea of a memoirist writing fiction about poetry.

SM: Central to What’s Never Said is a secret relationship with a professor that you had. With your experience now, as a college professor, how do you feel about student-teacher relationships that take place outside of the classroom?

SS: By the time I started teaching in my thirties, I was already with my husband, so I never dated a student. Romantic relationships are hard enough without having a power imbalance. Through teaching on the graduate level and adult education, I have lots of work connections and friendships outside of the classroom with former students. I actually think it helps.

They say you should write the book you want to read and teach the class you want to take. I did—I wrote a book called “Only As Good as Your Word: Writing Lessons From my Favorite Literary Gurus” about my evolution, learning how to make a living as a writer. And I call my classes the “instant gratification takes too long” method—where the goal is to publish a great piece by the end of the class. I try to be a liaison in the real world, introducing my students to editors and agents who could help them get out there. My favorite teachers and mentors helped me navigate the real world outside of the classroom. Luckily I have great role models to emulate.

SM: The chapters in your book switch from past to present. How did you decide about time and what effect does that have on the experience of the story?

SS:They have a clear chronological sequence. Originally it started and ended in 2010 and the rest told the story—in order—in the 1980’s. But then a book editor my age told me she missed Lila’s older voice for 250 pages. So I added two older chapters in the middle. In my last coauthored book, “The Bosnia List,” we switched back and forth in time every chapter. So I thought that was an interesting way to add drama/conflict/tension.

SM: Did you ever live in Israel? The Israel details are specific and Ronit is a wonderful character.

SS: I’ve spent time in Israel, I love it there, and have lots of cool relatives in Tel Aviv and Jerusalem. I was also close to some fascinating Israeli poets who were in my scene. My last book, “The Bosnia List,” was half set in Eastern Europe and did quite well. And my other books have been published in 10 different languages. I didn’t want to keep repeating the same New York neurotics. So I did go out of my way to make What’s Never Said bigger and more international. There’s the Israeli character Ronit, the Turkish student Tarik, and Sari is Armenian. I stole the name “Ronit” from an Israeli friend because I thought it sounded beautiful.

SM: You once told me, “Never write about writing—it’s boring.” What changed your mind?

SS: I didn’t change my mind. This book isn’t about writing. It’s about love and sex, which is exciting.

I have written about writing for the New York Times Draft column, Writer’s Digest and The Writer magazine, appropriate places for it. I tell my students who are trying to sell essays to the New York Times, Wall Street Journal, Los Angeles Times, and other mainstream publications and book houses, to not write about writing because most editors I know hate it. It doesn’t “play in Peoria,” as they say. Plus there’s too much competition. Can someone just starting out compete with Anne Lamott, Ray Bradbury, William Zinsser or Stephen King?

SM: You’ve published ten books, countless essays and book reviews and you’re an award winning writing professor at The New School, known for helping many of your students get published. Do you think that everyone has more than one book in them?

SS: I was intrigued to read somewhere that 80% of the people in this country want to write a book. But based on my students, I don’t think very many have any idea how long it takes or how hard it is to write 200 or 300 pages that are publishable. From the time I started my first novel until it was published was thirteen years. Instead of a book launch, I had a “Book Mitzvah.”

And I have undergraduate and graduate degrees studying literature and writing, along with thousands of clips from the New York Times and other top publications. I don’t think everyone has a book in them, and very few are obsessed enough to see it through. In my book seminars I ask my students, “If nobody ever paid you a cent for this, would you still finish this book?” If they say no, I say, “Then you’re writing the wrong book.” If they say yes, that’s the book that will probably sell. I am proud that I’m not someone who always wanted to write a novel but never finished. Even if they’re not well received, I finished and published three. What’s that line—the worst risk is not taking a risk.

SM: You’ve also published several acclaimed memoirs in the last decade. So what compels you to write at the volume that you do?

SS: I’m the oldest of four kids born close in age in the Midwest, the only girl. My three younger brothers have brilliant science brains like my doctor father. I’ve written about “The Disease Game” they played at dinner, where one would say the symptoms and the other would diagnose. “Forty-two year old Cambodian refugee vomiting blood?” Dad asked. “Schistosomasis!” Brian called. “Pass the potatoes.” Someone told me that “writing is like talking without being interrupted,” which fit.

Although I’ve been freelancing very seriously since I was twenty, I had trouble making a living. When I was 41, I saw an addiction specialist who helped me quit cigarettes, dope and alcohol which—he thought—was getting in the way of my ability to sustain a longer narrative. My first hardcover book didn’t come out until I was forty-three. So there’s still a sense of making up for lost time.

SM: What’s the reaction to this book been so far? What’s next?

SS: Some critics say my nonfiction is better than my fiction though my family says my nonfiction is fiction. A rule I tell my students is: The first piece you write that your family hates means that you’ve found your voice. My parents hate everything I write but we’re still close. After a therapy session I told them, “You can be proud of the accomplishment of my publishing a book without loving the book.” Meanwhile I’m going back to nonfiction. I have one more memoir in me.

Susan Shapiro is an award-winning writing professor at the New School who has written for the New York Times, Los Angeles Times, Salon, and Tin House. She’s the New York Times best-selling author of 10 books including the memoirs Five Men Who Broke My Heart, Lighting Up,  The Bosnia List (coauthored with Kenan Trebincevic), and the new novel What’s Never Said.

Susan Marque has an MFA in creative writing from The New School.  She has written for The Brooklyn Rail, Gotham Magazine, Pank, and The Cone.  She is currently working on a memoir about her journey with food and healing.