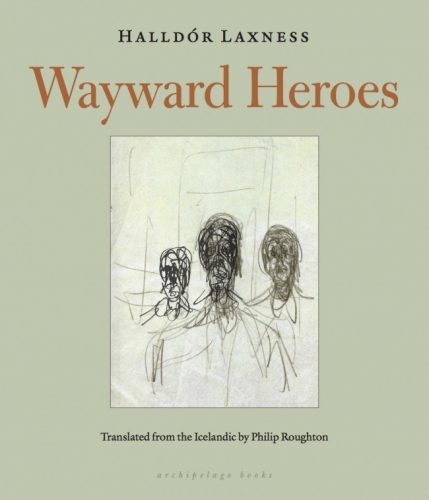 An excerpt from the forthcoming release from Archipelago Books.

Translated from Icelandic by Philip Roughton

THE SWORN BROTHERS had their men fish, hunt, and forage, and they berthed their boat in little inlets in the evening. They never strayed far from the boat. They took great pleasure in the sport of searching cliffs for seabirds and their eggs, lowering themselves on ropes from the brinks of the cliffs and ransacking the ledges and crevices for spoils. The cliffs that men descend for seabirds can often be a hundred fathoms or more, and those who forage them feel safer after they have abandoned their footholds entirely and dangle freely in the air than they do inching themselves over their edges. This task is one of the most enjoyable of any done on Hornstrandir.

The men kindled fires beneath overhangs and sometimes under the open sky, for plentiful firewood was found there on the beaches, and they slept in tents on the land when the weather was fine. When the weather took a turn for the worse, they went to farms and offered to fight for lodging, though the farmers would give up their beds to them without a word. Young men stared at the heroes, captivated, and in their presence, other men seemed of little moment. Young women stared as well; some offered to wash the heroes’ clothing, and others to rub their heads with soap. As for slaughter and plunder, they achieved little, for the farmers had a natural defense in their poverty and paltriness.

The sworn brothers often sat on bright evenings in calm weather on the grass-grown clifftop of Horn, which looks northwest over the sea toward the end of the inhabited world. They watched for the wakes of great fish on the surface of the sea, and the columns of spray from the spouting of whales. Dolphins leapt and seals frolicked, and a pod of porpoises headed due north to the heart of the ocean. More than once, they discussed how any man with the strength to capture these creatures, and to take their blubber and tusks, would have the means to trade for a longship and make war on more people than those who inhabit Hornstrandir. Swans would also fly in from the sea, stretching their necks and sounding in flight. Then the heroes would sit silently, for they knew that these were the dísir of the Lord of Hosts, women superior to any other, who select champions for Valhöll and turn their backs on cowards. The sworn brothers declared it the highest wisdom in the world to be able to understand the din of such birds and to interpret their flight.

One day as they sat at the edge of the clifftop, watching their men fishing at the base of the cliff, their conversation went as follows. Þormóður asked:

“Are there any two men in all the Vestfirðir who live as contentedly and cheerfully as we?”

“That I do not know,” said Þorgeir. “It seems more remarkable to me that no one has ever heard of two equally doughty men sharing such fraternity, either in the Vestfirðir or elsewhere – and may the hour never come when either of us begs for life or mercy from any man.”

Þormóður Kolbrúnarskáld said: “Can a better place exist than the one we inhabit now? None dare oppose us, and all as one give us whatever we demand, without a word, while women ask us our leave to hunt out our lice.”

Þorgeir said: “I think that any place where we might make enemies worthy of death at our hands, or of cutting us down with their weapons, would be better than here.”

“Yet it is hard to forget that Egill Skallagrímsson, the greatest hero ever to have lived in Iceland and its best skald, died in his kitchen in the company of crones,” said Þormóður.

“No man is a hero who is well married and has beautiful daughters, as Egill did,” said Þorgeir. “A hero is one who fears neither man nor god nor beast, neither sorcerer nor ogre, neither himself nor his fate, and challenges one and all to fight until he is laid out in the grass by his enemy’s weapons. And only he is a skald who swells such a man’s praise.”

Þormóður said: “Are there two men living anywhere whose friendship is so strong that nothing could ever diminish their concord and sworn brotherhood?”

Þorgeir replied: “Truth to tell, there is no firmer friendship than when two men are such great champions that neither need look to the other in anything, until one of them is slain – at which point the other shall do all he can to avenge him.”

Growing on the cliffs that rise from this sea – the outermost of all seas – high up on their faces, on narrow, hard-to-reach ledges, is a certain herb, whose like in fragrance, nutriment, and healing potency is not found in hayfields or gardens. This herb has a hollow stalk nearly as tall as a man, and its upper part is pliant and sweet and a cure for most ailments. Due to this herb’s enticing sweetness, heathens have named it “cravewort,” whereas Christians have given it the Latin name angelica, after the angels and archangels seated nearest the throne of Christ in Heaven.

In late spring, the sworn brothers often climbed down to cliff ledges to gather cravewort. One fair-weather day as they were enjoying themselves in this task, Þorgeir was cutting stalks so enthusiastically, yet heedlessly, that the edge of the narrow cleft where his feet were wedged crumbled beneath him, and he lost his balance. The cleft’s surface was so loose that all it took was the weight of one man to break it. Since the hero had not yet been claimed by Hel, however, he was able, as he fell, to grab hold of a cravewort stalk growing out from a tuft of grass in a crevice in the cliff face, and hang onto it. Below him was a drop of a hundred fathoms, whereas above, only a few fathoms separated him from a narrow path leading to the cliff’s brow.

On the cliff face where Þorgeir now hung, there was neither a shelf nor a spur nor any other toehold, nor any chink or handhold by which he could heave himself up. His only life-thread now was one pitiful stalk of cravewort.

As for Þormóður, he had clambered down onto another ledge to gather this herb, and lingered there doing so for quite some time. He and Þorgeir could not see each other. Upon cutting his fill, Þormóður tied what he had gathered into a bundle, placed it on his back, and hoisted himself to the top of the cliff. The weather was calm and the sea still, and the sun shone in a clear sky.

Þormóður lay down on the overhang to wait for his sworn brother, but the cries of the seabirds lulled him to sleep. In fact, the sworn brothers were not that far away from each other – if Þorgeir had called out even a little loudly, Þorgeir could easily have heard him. Yet on this, the old books all tell the same story: nothing could have been further from Þorgeir’s mind at that moment, hanging as he was from the cliff, than to call his sworn brother’s name only to beg him for help.

Þormóður, the books say, now sleeps soundly on Hornbjarg, eventually waking late in the day. He wonders about his sworn brother, and starts calling to him from over the brink. Þorgeir does not answer. Þormóður climbs down to a ledge, whence he shouts loudly, startling birds into flight all over the cliff. Finally, from down below him, Þorgeir replies: “Stop scaring the birds with your shouting!”

Þormóður asks what is taking him so long.

Þorgeir replies, saying: “It matters little what is taking me so long.”

Þorgeir Hávarsson then gives the reply that has long been remembered in the Vestfirðir: “I think that I will be finished when the one in my hand comes out.”

Þormóður begins to suspect that not all is as should be with his sworn brother’s cutting of cravewort, and he clambers hastily down to the cleft from which Þorgeir has fallen. He peers over its edge and spies his sworn brother hanging from the cliff. The cravewort stalk is quite frayed, and on the verge of breaking. Þormóður tosses a rope to Þorgeir and manages to pull him up to the cleft. They then climb the narrow path to the top of the cliff.

Þorgeir Hávarsson did not thank his sworn brother for saving him, nor did he express gratitude for it in any other way – in fact, it seemed as if he harbored some sort of grudge against Þormóður for the incident, and things grew colder between the sworn brothers from that point on.

Halldór Laxness (1902-1998) is the undisputed master of modern Icelandic fiction. He was awarded the Nobel Prize in Literature in 1955 “for his vivid epic power which has renewed the great narrative art of Iceland.” His body of work includes novels, essays, poems, plays, stories, and memoirs: more than sixty books in all. His works available in English include The Great Weaver from Kashmir, Independent People, The Fish Can Sing, World Light, Under the Glacier, Iceland’s Bell, and Paradise Reclaimed.

Big A, Little A