At the Rest Stop, an Hour South of the State Prison, Interstate 5

After Vagabond by Agnès Varda

The woman has the hood of her ’85 Jimmy propped up with a white aluminum curtain rod. She only has forty-five minutes, she tells me, before visiting hours are over. There’s not enough time to let the engine cool. There’s no way to remove the radiator cap. Even when I use my shop rags and work gloves. The antifreeze begins to smell good in the sunlight.

For the last hour I’ve been listening to a radio show about famous art thieves. Marcel, the thief known only by one name, was caught, finally, just last year. During his trial, he wept, explaining that his favorite piece, a Marc Chagall sketch of a woman floating across a night sky, was legitimately his, and that he would kill himself if his children weren’t allowed to keep it.

She’s looking at me, as if I’m thinking, You asked for this, I told you from the beginning, You had it coming. I’m looking down at her blue Nikes, which have never been closer to the ground.

The sketch, Marcel explained to the jury, had once belonged to his father, who had fought the Germans in the snow. 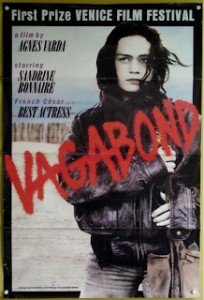 After Vagabond by Agnès Varda

When she discovered the little bottle of morphine—the secret stash under the kitchen sink that I had lied about throwing away—she was so angry that she took off her blue Nikes and threw them at me, one after the other, the second one clonking off the back of my head and clattering into the unwashed dishes. She unlocked her knife and stabbed the bottle on the counter as if the poor thing were a possessed child’s toy in a horror movie. Then she tried to set fire to it with her Zippo, leaving a mangled and melted heap, while screaming, “Happy Birthday!” It was like watching someone burn down a forest or kill a kitten. Her lovely blonde hair kept bobbing close to the flame and I was afraid she would set herself on fire. When she fled the house in heels without her coat or her cigarettes, giving me an hour to pack and clear out for good, I licked some of the liquid morphine off of the burnt plastic and scraped the remnants of the little pool into a travel-sized shampoo bottle for the road. Then I grabbed my sleeping bag and my collection of NASA commemorative Space Shuttle decals and stole her cigarettes and her folding knife. I stuffed my pockets to bulging with toilet paper, put on my winter ski hat with the white pom-pom at the top, and headed out into the snow.

It isn’t much fun to celebrate your 20th birthday in a broken-down city without a job or any place to sleep in the winter, but how could I blame her? I was trash and I knew it. I knew an area of the city where some of the mansions built for robber barons in the 1920s were now deserted and the private tennis courts displayed signs advertising VACANT LAND. London Plane trees lent a European grace to the winding avenues which used to shuttle commuters downtown in fancy hats and furs scalped from the infinite forests surrounding the Great Lakes. The foreclosed squatters and the broke students and the homeless and the drug gangs and the police and the ghosts of the city’s splendid past existed in parallel universes, seeing right through one another. I thought the building was empty until I found a girl in a red scarf and a soaked hoodie smeared with mud shivering next to a cold fireplace in the grand empty parlor of a condemned house surrounded by warning signs and fences. While she watched me silently and mice raced around the edges of the great-room, I draped my sleeping bag around her shoulders and started attacking the boarded-up windows for firewood, breaking the plywood apart with an art deco wrought-iron poker from a matching set of implements by the fireplace. I took a wad of toilet paper from my back pocket and lit the fire under some wood splinters, at which point the room started filling up with smoke.

The fire started to draw, and we shared the sleeping bag, close enough to the fire to cough all night and feel as though our faces were getting sunburned. I dismantled the remains of some classic chairs and took apart some of the rotten ornamental staircase for fuel. I ripped the pom-pom off my ski hat and used it to clean up her face. The place had already been stripped several times for furniture, plumbing fixtures, and copper. Outside, glimpsed through the diamond shapes of the leaded windows, the snow drifted down lazily in the streetlamps. We took the last of the morphine and drifted off playing a game in which we described the snow: “It looks kinda like sparks…no, fireflies…or feathers maybe…?”