When we went to see the trailer we’d rented, officially Uhauling, it was clear immediately: our books weren’t going to fit. I had eighteen boxes. She had eighteen boxes. The shipping would cost over a grand and so we reconsidered. We were moving the cheapest way possible, to a new state where neither of us had jobs but we had leads on things and people to email and books to write. Eventually we found a sixteen-foot Penske truck, huge but budget friendly, and I drove it packed with thirty-six boxes of books plus a couch across Texas into a storm in New Mexico that sent tumbleweeds skidding fifty miles an hour. When I hit one it sounded like a gunshot. The two orange cats drowsed on homeopathic drops in the cab with me, the little gray cat in my partner’s 4Runner, which pulled my Civic. A true lesbian caravan.

Everything else came out of boxes first because it was immediately necessary—as though the books weren’t—but eventually we were left with a mountain in the half of the former tapestry studio we were renting from a woman named Jan, who told us she worked on Judy Chicago’s Dinner Party but also told us everything at least three times, short term memory loss. Almost-identical voicemails. The cats loved the box mountain, sat on its cliffs to look out at the yard and the storms that hit every afternoon. We needed to work, we needed to carve out workspaces, we needed to unpack the books but how. One of the early dreams I’d talked about with Chelsea when imagining our move mere months after we started dating was a lesbian library. Because what would that look like? Eileen Myles: “I mean—if you were told you could live that way—in a house entirely torn open, gutted. Something that doesn’t so much rule the world, but generates it— well, what would you do?” New Mexico has this long history of lesbians, artists especially, moving out here to join communities that embrace queer lifestyles (Agnes Martin, Georgia O’Keeffe, Harmony Hammond). Of course it’s a largely invisible history, as lesbian histories tend to be, so what if we could follow this path while also making it public? Piece together the stories of these women and their lovers and their art, and eventually make a library for them, for us, for people to come visit and browse and do research. Folding these histories and this project and our own projects into our daily lives was part of the whole experiment, one of the goals of the move itself. 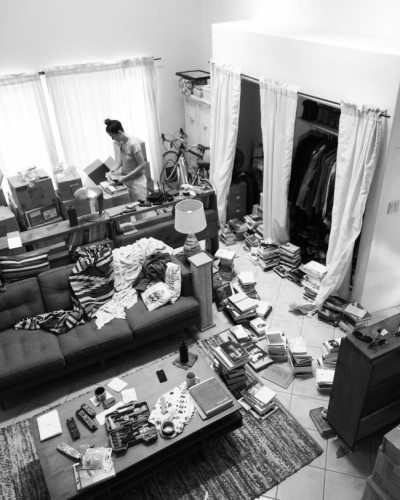 So maybe we could start at home; we had enough books between us. So we started with genre. It seemed right. Logical. A stack for novels, a stack for short fiction, a stack for essays and nonfiction, a stack for theory, a stack for memoir, a stack for poetry. But wait. What about Anne Carson? Her essays slash poetry slash what even? What about Claudia Rankine? Roland Barthes? The nonfiction pile quickly overflowed into four piles, because it’s kind of everything. The art writing pile was enormous, unwieldy, encroaching on our narrow walkways, closing us in. We got stuck.

Some things—kind of a lot—had to go, because quite simply an author or a book or its characters or usually all of the above were flat out homophobic and/or misogynist, and a lesbian library doesn’t really have room for that shit, at least not ours. The revelation came at a breaking point, my partner looking up from the stack of books she’d just pulled from a box, crestfallen, saying, “Maybe we just get rid of Hemingway.” And so we did. So went Kerouac, Burroughs, most of the Beats but not all. Shoot your wife, get lost. Curation is crucial.

We were still lost in our stacks, and the cats were starting to knock them over. We were losing the thread. Why genre? “What’s genre?” I said, out loud. I polled my friends over text, how do you merge books? My blond friend recommended putting the entire collection, both our collections, in alphabetical order by author’s last name. For a second this project appealed to me, a former bookseller, and my girlfriend, a trained archivist, but then I wondered what if we just came up with our own system? I remembered the time I visited the Prelinger Library in San Francisco, essentially a warehouse organized by subjects that bleed into one another: Critical Histories of Suburbia to Homebuilding How-To to Art How-To, which recalibrated my whole understanding of geography.

The next day we started with Lesbians. That had been the whole plan, right? It turned out we had way more than we thought. When you start being honest about it, I mean, Virginia Woolf and Jane Bowles and Carson McCullers all count, Djuna Barnes no matter what she said, Susan Sontag, and that’s before the out-and-outs—Monique Wittig, Audre Lorde, Adrienne Rich, Sappho—and the contemporaries—Natalie Diaz, Jeanette Winterson, Ali Smith, Dorothy Allison, Etel Adnan, Eileen. We could have called it Queer Women, or incorporated it into a Queer or LGBTQ shelf, but it was more important that we call it Lesbians. A time for labels. From there grew piles for Friendship and Community, Letters and Interviews. And then books about Places, then Architecture and Design, which led into Environment and Natural Phenomena and Animals and then Mythical Creatures: ghosts, monsters, mermaids. A larger stack than expected! Everyday Life, Objects, Archives. Soon I had a stack of Grief and Heartbreak that merged with a section on Family, which opened up to Feelings and the Body and Self Help. America was a huge problem. We ended up with a section on Fucked Up America (Joan Didion, David Foster Wallace, Toni Morrison), a section on Americans Fucking Shit Up Abroad, and a funny little section of Americana, classics we didn’t hate.

In a funny way we got to know each other all over again through our boxes, too. To appreciate the other’s history, thought process. Personal tangents. Obsessions. To laugh at overlaps. At our minds made manifest. At the uncategorizable parts of us—Dude Poets? And the strangely categorizable—Non-Apocalyptic Near Futures. Haunted Love Stories.

Eventually, when we still had stacks and half-filled shelves that face our would-be offices and somehow unopened boxes, I started to get forlorn. I started to slow down on purpose, to work on other things. Curtains! Kitchen! Clothes! I wanted to pause. Because eventually all the chaos, all the piles and mess—the possibility—would come to an end. The physical evidence of transition would disappear. Everything would just be . . . shelved. Would solidify into placement, location. Would find itself defined. Until reorganization, perhaps, or another move. Unfathomable.

Jenn Shapland is a nonfiction writer living in New Mexico. Her work has appeared in Tin House, The Lifted Brow, Electric Literature, and elsewhere. She’s currently writing a book-length manuscript called The Autobiography of Carson McCullers. She has a PhD in English from UT Austin.

What Needed Screwing Got Screwed