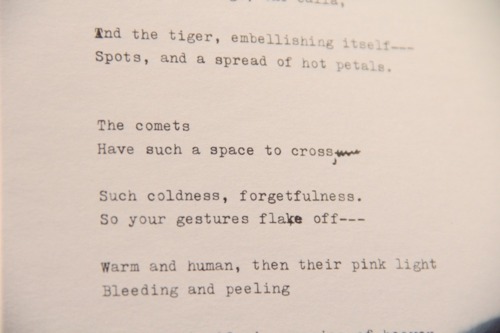 A month ago, I touched a lock of Sylvia Plath’s hair. I was at a Plath symposium in Bloomington, Indiana, where the university’s Lilly Library holds a vast store of Plath writings and artifacts. There are minute daily planners she filled to the margins with details of her life as a Fulbright scholar at Cambridge: how she’d spent the day with Ted, reminders to buy books on reading tarot, reports of her headaches and sleeplessness. There are files of childhood ephemera, the homemade paper dolls of Hollywood-style vamps with marabou-fringed dresses, the rhyming birthday cards for her grandparents, the Valentine for her father printed with the words “My Heart Belongs to Daddy.” And there is the hair.

I had to visit the library twice before I was able to see it. The first time, the hair was already engaged, someone else having requested their own moment with it. I should have expected this. The library teemed with our flock of “Plath freaks,” as the symposium organizer lovingly called us, or “Plath people,” as I overheard one librarian describe us with more vexation, as in, “Have those Plath people behaved themselves?” When I came back the next day, the hair was checked out again, but I waited, even though as I did so, I returned to earlier feelings that I shouldn’t see the hair at all. 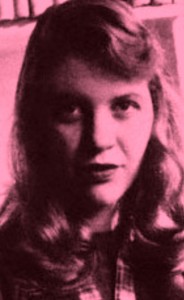 Plath, like no other poet, has been idolized and appropriated and taken ownership of, cast and recast by acolytes as a “suicide doll,” as her daughter, Frieda Hughes, once said. For the many years I’ve spent studying Plath, I’ve worried that I might be behaving this way, too, that even my disdain for what I see as the wrong kind of Plath groupies is proprietary in a way I have no right to be. Now, here I was about to perpetrate some suspiciously cultish behavior and check out a relic of this saint, an act that looked a lot like worshipping the myth and forgetting the person and the poet.

The box the hair came in was baby blue and tied with a piece of white cloth ribbon. I hesitated before opening it. The lock was not the weird, scant clipping I was expecting, but a long, sand-colored ponytail, also bound with white ribbon. It had slid towards a corner of the box, strangely imperfect and human. I’d expected my moment with the hair to be one of camp, or self-hate, or of not feeling much of anything. Instead, when I put my hair next to hers to compare, it was hard not to cry.

Seeing the hair felt much to me like reading my most favorite of Plath’s poems, “The Night Dances.” “The Night Dances” was written fifty years ago, and was part of the manuscript of poems which Plath left in a binder on her desk on the last morning of her life. In fact, the symposium I attended was held in part to commemorate the fifty years it’s been since Plath wrote her most famous works in that Ariel manuscript—“Daddy,” “Lady Lazarus,” and those other “October poems” on which much of Plath’s literary renown rests.

“The Night Dances” is not among those poems. While there’s hardly a corner of Plath’s work or life that hasn’t been strip-mined by scholars and fans, “The Night Dances” has felt less heat. Where the works of Plath’s that get the most attention offer opportunities to hunt for biography filtering in, there’s not much chance for that here. It’s a poem almost entirely populated by little more than traces of people, that begins with a loving address to “you,” but that loses contact with this presence by the poem’s second half to stand alone.  It’s one of the loneliest poems in all of Ariel, and one of the most tender, in which Plath stares down a dazzling, dwarfing, cold cosmos.

Over the arc of the poem, we swing with Plath from the fleet gestures of human life, and from the affection to be found there, out to a tremendous universe that trivializes them only to render them more beautiful. Consider the beginning:

A smile fell in the grass.
Irretrievable!

And how will your night dances
Lose themselves. In mathematics?

Such pure leaps and spirals—
Surely they travel

We start the poem earthbound with Plath’s speaker, already a lost cause, our human signs swallowed up. We don’t get to linger there long, though; Plath reframes our inquiry with that next line. 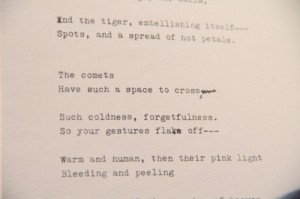 Forget the null problem of that smile being lost, of being small and expendable—think instead about what you’re supposed to lose, need to lose. Think about your night dances. It’s a question that reminds me of that best Mary Oliver line: “And what will you do with your one wild and precious life?” Except that where Oliver closes her line with a question mark, Plath closes the first part of that question with a period. This isn’t interrogation so much as observation, the hinge that first opens up the mind of the poem.

“I shall not entirely sit emptied of beauties, the gift/ Of your small breath, the drenched grass/Smell of your sleeps, lilies, lilies,” Plath goes on. It’s hard to know who this breath belongs to—lover? Dozing child? What matters is the filling it does, the real hold it has for Plath’s speaker, the infinite reverberation it shares with those “pure leaps and spirals.”

But our time with this sleeping other does not hold. A few lines later, we’re speeding with comets that:

Have such a space to cross

Such coldness, forgetfulness,
So your gestures flake off

Warm and human, then their pink light
Bleeding and peeling

Through the black amnesias of heaven.

We’ve been propelled from the earth, from grasses and previous lines of lilies, into a giant of a universe to whom humanity is little more than flaking paint. But we’re gorgeous, awe-worthy paint, the source of the “pink light” that illuminates its whole depthless firmament. You—we—are at once immaterial to the comet and cometlike ourselves.

The last lines of the poem gut me. In high school, I used to write them, talismanic, in silver Sharpie on the backs of all my notebooks. Today instead I sleep under a tacked-up Xerox of Plath’s first draft, where they barely fit onto the bottom of her pink Smith College memorandum paper:

Why am I given

Six-sided, white
On my eyes, my lips, my hair

Plath reels between scales: these lamps are planets are snowflakes; we are these beauties, we are their recipients, we are the no-place that is lucky enough to receive them.

Emma Komlos-Hrobsky‘s writing has appeared in The Story Collider, Hunger Mountain, Hot Metal Bridge, and Dreamboat, among other journals. She holds an MFA from The New School and is an editorial assistant at Tin House.