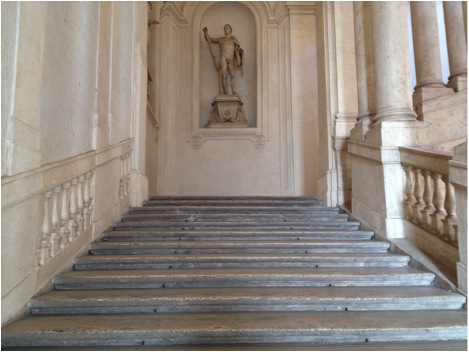 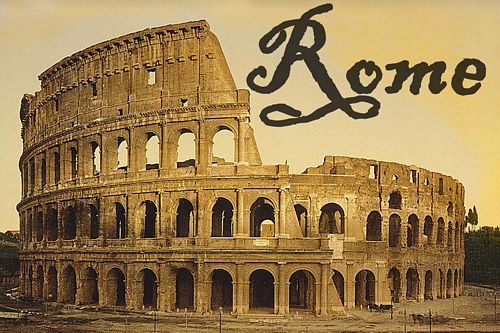 Someone put my fiction in the hands of people who offered me this room in Rome, in a villa on a hill with thirty artists and scholars.  This is so removed from my experience that when I look from it—from Rome—over what I’ve known so far, my past feels almost geometric.  The arc of a novel and its action on a reader is a shift in perspective.  In the novel I am writing, my protagonist tries to contend with her experience being fundamentally foreign to her sister’s.  The sister is in the flux of mental illness.  The ground beneath the protagonist’s feet is in such motion that the simplest decisions are almost impossible for her to make (do laundry?).  Between decisions her mind moves fluidly, almost and then not at all in patterns she can identify.  The danger is a book that suffocates in there.  I am writing an American novel as America is slipping.  There’s a terrace on the roof of the villa on the hill over Rome. There’s Rome over there, not a geometric city. 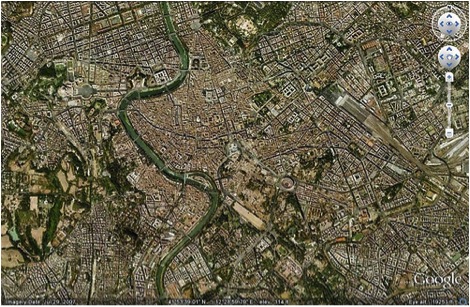 I have been in a place where I don’t speak the language only three times, each time for a week.  Once to Paris, where I walked all day, looking, once to Cairo, where I walked all day, looking, once to a condo in summertime Mexico, where I wrote in the humidity, staring at the ocean from a window where I could see, in the water, a barracuda on patrol.  I don’t come from a family that vacationed, traveled, or had visitors, though we moved around the country a lot.  I have been given Italian classes.  I have been attending them for three hours each morning.  I hate Italian class.  I revert to being a dyslexic kid in algebra, unable to stop crying.  Morning is my writing time.  I quit the classes.  I have felt this good about quitting something three times in my life:  I quit calculus my senior year of high school.  I quit doing theater sophomore year in college.  I quit a job teaching college for $19/in-class hour.  I am going to be in Italy immersed in English.  I’ve got some shame about it.  It means I have to engage English harder than ever before or I won’t have earned my time here.

On the way to see Caravaggio’s Judith chopping off the head of Holofernes I gave myself a series of writing tasks.  Images to collect from paintings, thought projects for the walk, stuff I’m used to doing when I go out while I’m working on something.  I forgot them once I hit the museum because art did its work on me:  I felt moved by architecture in a way I have never been able to notice before.  Is this because I am not in my own country?  It was a staircase by Bernini.  I was at dinner a few weeks later and mentioned it to the famous architect I was seated next to (that’s what happens here, you end up sitting next to a famous architect) and he knew exactly the staircase I meant.  He said he had felt like he was floating when he first stood on it and had taken measurements and used them in museums he designed.  The other thing that happens in the museums here besides forgetting what I came for is that I recognize paintings from childhood.  My mother studied Italian painting, so the house was filled with books of Italian painting.  I had forgotten.  I am feeling a thread with a history that I had not known was a thread.  This is a motion for the book.  I don’t know how it manifests. 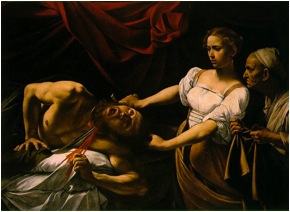 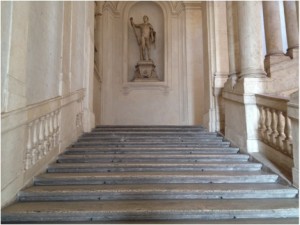 The Pantheon is the shape of the sky as it must have looked before light pollution, and there is still not a ton of light pollution here so sometimes I can stand in the city and above me the sky is totally a dome, like the Pantheon.  I walked around the Pantheon through the crowd—there are not always crowds—the Pantheon is free and you can just walk through it on your way to somewhere else.  I walked through moving among overlapping languages, a watery soundscape made round by all the kinds of roundness.  The conversations gradually got louder, like water heaping in a cup, and then the loudspeaker came on.  A man and a woman, or a few male voices and a few female voices—I couldn’t tell—said in one language after another—booming!  “Silence in the Pantheon.  This is a sacred place!”

New Year’s in Rome—standing on the roof balcony looking down and thinking, “That is so Roman the way there are no official fireworks, just everyone out there exploding shit everywhere . . .”  I was not going to be a person who said things like that—who said, “The Romans this” or “The Romans that.”  I remain an ambivalent tourist.  It does feel powerful to make a broad statement about a whole other culture and think of it as true.  I also think about novel form.  This kind of city fireworks is a lot more like my idea of a novel than the fireworks I grew up with.

I have made two Roman friends.  One is the translator of some of my favorite anglophone writers and the other is a professor of American fiction.  Give me a break, I like what I like.  Maybe it is because yesterday I was taken to a back room at the Vatican where I could see, and then stand inside, an architect’s model of the cathedral from like 1550—inside one of the domes that was eventually actually constructed—around which were drawings that included depictions of the scaffolding and a wall honoring an illiterate genius with (according to his portrait) giant hands for his scaffolding inventions—but today I wrote this, as if it were a sentence: “simile, simile, noun, noun, noun” and am considering leaving it in my book like that. 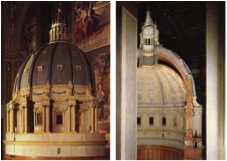 [I was not allowed to take pictures of the model I write about here; this image, taken from the Internet, is of another one I saw, but it’s just the dome—the other model is of the whole structure, opened like a doll’s house, and it takes several guards to maneuver; I stood inside and looked out its windows.]

I was in a tomb stripped of its frescoes—they had been removed to a museum, looted, or something in between.  On an easel had been placed several laminated images to indicate what had been there.  But the images were not of what had been there, nor were they reconstructions of what whatever had been there might have looked like.  This is what was placed there for our information: 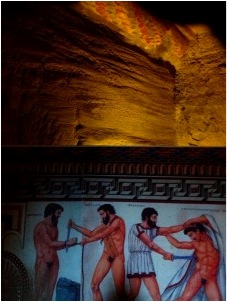 An artist friend with me said it looks like a 1930s illustration.  It seems to show what *figures* were there and what they were *doing* (stabbing, etc.) but not to have any interest in showing what they might have or actually *looked like* or *been like.*   I said to my favorite archaeologist:  “But it seems like style doesn’t matter?” and she said, “That’s right.”  I just don’t know what to do with this information, re-presented to me so consistently.  I was astonished, and also confused by being the only one there who seemed astonished.

I know the sound—not of my voice, but the sound of my book, its language palette.  In my voice there are terrible annoying corners.  This month I had to let the novel draft sit more than usual this year in order to work on final and final final edits of the Apocalypse collection.  My editor did something with the voice of the Apocalypse book—something like clip the very tips of a thick field of grass—that really helped me understand what vocal colors contain it, just helped recognize a frenetic edge in the language that was detracting. A smart thing to do in yoga is to notice when you are in a pose and want to wiggle away from it, and then choose not to wiggle away.  You don’t try to stop or make yourself stop or anything, you just choose to be there anyway and that can let you quiet down inside.  I tried to do that in one way finishing up the collection, and I’m trying to do it another way transitioning into the second draft of the novel.   I read from the new beginning of the novel, read in a format known here as “shoptalk” to suggest informality, but it’s still pretty formal.  The new beginning of the book is Rome.  I didn’t ask it to be, but I wanted to write this story that was outside the range of the book, and suddenly it felt like a story about the rest of the book.  It felt like a good metaphor, for the consciousness of the book is an American girl in Rome.  I displaced it as much as possible.  But it may be the best writing in the draft so far.  A way of understanding its palette. 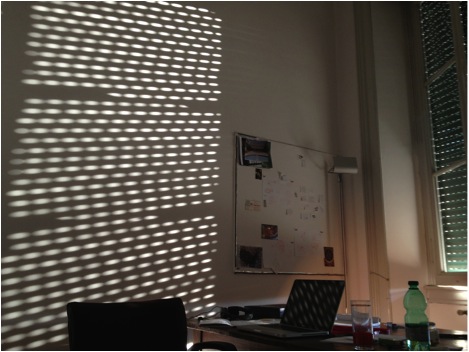 I read from the Apocalypses in a room with a floor that looks like this: 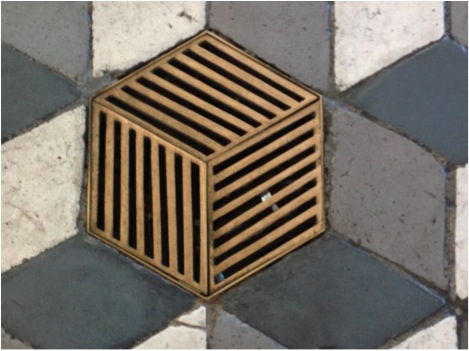 I tried to describe my year.  I read from the Apocalypses.  I tried to explain the way Rome snuck into the books.   How a playful conjugation of the word Apocalypse from the Greek snuck in, how a brief and tragic history of concrete featuring the Pantheon snuck in.  I made a joke about the Pantheon sneaking.  I talked about reading Ovid’s versions of stories I’ve loved since I was a little kid.  Referenced a larger idea about transformation.  Described the Apocalypses: little bite-sized puffs of stories, I said, that should begin to resonate as they accumulate.  The apocalyptic, for me (I said) is about how things explode and then fall into a new shape—so each time I read, I try to assemble a new sequence that will form new meanings because of the magic of proximity (I said). Which is another way of suggesting the mysterious ways that place matters (I said).  I have one more month.  Can you see it coming together?

Lucy Corin is the author of two story collections, One Hundred Apocalypses and Other Apocalypses, which is forthcoming this August from McSweeney’s Books, and The Entire Predicament (Tin House Books), as well as a novel, Everyday Psychokillers:  A History for Girls (FC2).  She is currently the John Guare Writer’s Fund Rome Prize fellow at the American Academy in Rome, where she’s at work on a second novel.