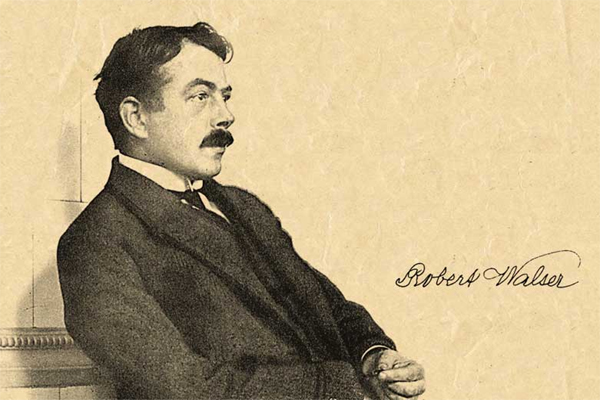 “He magicked flowers onto paper, so that upon it they quivered, rejoiced, and smiled, swaying in their plantlike ways; his concern was the flesh of flowers, the spirit of the secret which dwells in the resistance a thing with special properties offers to understanding. “ — “Thoughts on Cezanne” by Robert Walser (translated into English by Christopher Middleton)

Would it not be more appropriate for me to say the sentence is more Christopher Middleton’s and less Robert Walser’s? I mean, Robert Walser did NOT write the English words that comprise the sentence, and yet he most certainly wrote the sentence. Or: in 1929 Robert Walser, living voluntarily in the Waldau Sanitorium in Switzerland, wrote not the sentence above but a different sentence in an antiquated form of German shorthand on a scrap of paper, and 20 years later (or so), German scholar Jochen Greven transcribed this shorthand version into a legible German one that the poet Christopher Middleton translated into English, which later appeared in an English-language edition of Robert Walser’s Selected Stories, published by FSG in 1982, of which a single copy (a first-edition hardcover) sold to some sucker who eventually sold it back to Powell’s made its strange way into my hands in the year of 2006—77 some years after Walser wrote the original sentence. Towel snap! 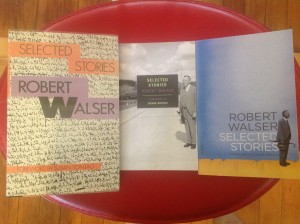 I’m drawn to the dazzling action verb “magicked,” which means, in its intransitive form, “to produce, remove, or influence through the use of magic.” Walser’s / Greven’s / Middleton’s choice here seems fresh in the way it shifts away from its ordinary usage as adjective to its stranger, more ethereal usage as action verb. Magicked. It immediately draws my attention to the sentence as beautifully essential artifice without at all removing me from the sentence’s surface. In fact the verb “magicked” pushes me deeper into the sentence’s mysterious, seemingly impossible action of making something out of nothing, of putting flowers ONTO paper, and in the next part of that sentence (its second base clause), those flowers begin to take on sentient life. The flowers “quiver,” “rejoice,” “smile,” and “sway.” Walser here describes not Cezanne painting flowers but the impression Cezanne’s painted flowers leave on Walser, the way Walser sees the flowers on actual paper and on the paper of his mind. Thinking is not restful. Not only do the flowers quiver and sway—as flowers are wont to do—they “smile” and “rejoice.” The flowers express and celebrate their feelings of joy. The flowers are not really flowers nor are they merely a representation of flowers on paper or canvas (which comes from a once living thing we call Tree)—they are sentient, human, capable of feeling and expression.

Walser infuses everything he sees with his own profound soulfulness. Within the movement of the sentence—the movement from subject (“they”) to predicate (that extended list of verbs)—objects come to life. Magick. In the essay “Talking Forks,” Charles Baxter describes this kind of detailing as “endowing objects with inner life”—very much a Notable Quality of Walser’s prose style. His vision here not only speaks to his immense capacity for wonder but to his desire to come out of self-imposed isolation, and to his loneliness that engenders that wonder and then gives way to his reaching out into the world. When things get scary inside, son, and they do, time to head into the outdoors, time to breathe in the deep space of Other. Everything moves, including the eye, which makes it possible to see more closely, to see every side, to see the underside of things, the play of light and shade over the surface’s varied textures, fast song, fast song, slow song, fast song, numinous qualities both analogous and contradictory. Cezanne’s flowers quiver AND rejoice. The act of quivering strikes me not as celebratory but anxious, painful even, one step removed from seizure or much-needed rest. When the sentence expresses irreconcilable contradiction, it looks out into human mystery.

Now we arrive at that semi-colon (half-time!); I could write an entire page on Walser’s use of the semi-colon but will restrain myself. It’s sufficient to say this: the semi-colon signals that “COMPLETE THOUGHTS”( i.e., independent clauses that can STAND ALONE) reside on both sides. Enough said.

After the semi-colon, the sentence shifts modes slightly from description-narrative to  lyrical-critical-essay (“His concern was the flesh of flowers”), then to a meditative, even philosophical stance. Walser’s sentences are always in flux, shifting prose modes, tones, registers, changing clothes and wigs, switching out guitars, reaching towards stillness, then noise, the stillness of noise and the noise of stillness. We are seeing the human mind moving from the world external back into the self then back out. The self is both the thing seen and the lens through which it sees. Another way to describe “the flesh of flowers” is “the spirit of the secret which dwells in the resistance a thing with special properties offers to understanding.”

You thought you were in an elaborate, fleshy narrative description, and the next thing you know, you’re in the middle of an abstractly expressed philosophical stance swimming along swimmingly in the warm streams of the human 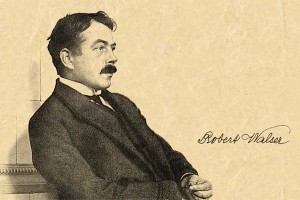 mystery running beneath our lives. It’s not simply “the secret,” it’s the “spirit of the secret that lives in resistance.” A thing with “special properties” offers resistance, which is to say, if we look closely enough (Walser always does), we bear witness to the Resistance Inherent in All Living Things, to that which is the same and not the same, to that which generates and obliterates, to David slaying not only Goliath but David too. Of course Walser doesn’t say WHAT the resistance offers to understanding; that is for readers to take with them into deep white space.

All of Walser’s sentences seem to reside inside of one another. I’m not sure I know what that means other than to say every single sentence—in its desire to dilate vision, to see things so carefully, closely, so generously and to see what lies beneath or just out of reach—reveals a glimpse of idiosyncratic self in motion on Earth. Consider this lovely paragraph with which Christopher Middleton began Walser’s Selected Stories:

I am a kind of artisan novelist. A writer of novellas I certainly am not. If I am
well-disposed, that’s to say, feeling good, I tailor, cobble, weld, plane, knock,
hammer, or nail together lines the content of which people understand at once.
If you liked, you could call me a writer who goes to work with a lathe. My
writing is wallpapering. One or two kindly people venture to think of me as a
poet, which indulgence and manners allow me to concede. My prose pieces are,
to my mind, nothing more nor less than parts of a long, plotless, realistic story.
For me, the sketches I produce now and then are shortish or longish chapters
of a novel. The novel I am constantly writing is always the same one, and it
might be described as a variously sliced-up or torn-apart book of myself. (xi)

Every Walser sentence enacts its own lively representation of unique and commonplace self while carrying with it all the other Walser sentences: written, published, unpublished, lost to a fire in a publishing house, all the unwritten ones too, the ones Walser’s poverty and illness kept him from composing, those word ghosts ghosting us now. We human readers are so lucky to have copies of other peoples’ beautiful words, which brings me right back (imagine a silvery tram afloat in the Portland sky!) to the sentence at hand, to its final moment of mystery, that “spirit of the secret that dwells in the resistance a thing with special properties offers to understanding.” The tail end of the predicate that carries inside of it every Robert Walser sentence written and unwritten now doubles back on itself, referring to its own “spirit of secret,” that natural resistance blessing our lives with contradiction, with mystery. The flesh of the apple beneath ripe red skin bruises. Or rots. In “For Grace, After a Party,” Frank O’Hara’s speaker “blazes his tirade” against someone who doesn’t interest him (“…it was love for you that set me / afire…”). Robert Walser felt that his writing career was finished; in the face of that despair, he continued writing. The resistance a thing offers to understanding.

Jay Ponteri‘s memoir, Wedlocked, has recently been published by Hawthorne Books. His chapbook of short prose, Darkmouth Strikes Again, is being published by Future Tense Books, 2014. His essay “Listen to this” was mentioned as a Notable Essay in Best American Essays 2010. He has published prose in Del Sol Review, Seattle Review,Salamander, Cimarron Review, Puerto Del Sol, and Forklift, Ohio, among others. He directs the undergraduate creative writing program at Marylhurst University and show:tell, The Workshop for Teen Writers & Artists. He is the founding editor of both the online literary magazine M Review and HABIT Books, a publisher of prose and poetry chapbooks.