Long before destination drinking had a moniker, Paris was already a hot toddy hot spot in the 1920s and 1930s. Drinks like the Whiz Bang, Green Hat, Sidecar, Blue Bird and Fog Horn were in circulation among the haute cocktail crowd and local lushes at places like the Ritz Paris, the American Bar in London and less posh spots. It’s no surprise that this timeframe between the two World Wars was called les années folles—among other nicknames. These are cocktails that don’t beat around the bush: sip a bit of the Depth Bomb, named after the M.L. Submarine Chasers of the First World War, made with brandy, Apple-Jack brandy, grenadine and lemon juice, and you’ll see stars in your eyes. Bored with teatime? Try serving Dirty Earl Grey Martinis to spike things up. Feeling groggy? If coffee doesn’t do the trick, maybe a Corpse Reviver No. 2 made with Pernod, Champagne and lemon juice will speak to you—or depending on how many you imbibe, it may take the words right out of your mouth. Spoken like a true habitué, F. Scott wrote, “First you take a drink, then the drink takes a drink, then the drink takes you.”

But the early twentieth century isn’t all flapper fluff; drinking was serious business and boasts an exceedingly long, compelling history that would be impossible to explore in this column, if for no other reason than it’s the apéritif hour somewhere in the world and time for a toast. I’m delighted to write that this column celebrates its first-year anniversary this month, and right now seems as good a time as any to raise a glass—or coupe, flask or shot glass. And the Lost Generation certainly knew how to raise the stemware of their choice. 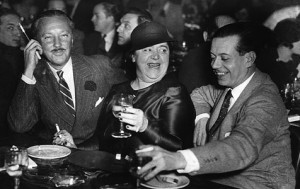 Were all of the drinkers back then writers? No, but all the writers were drinkers. (It’s comforting to know that some things haven’t changed.) Whether accusation or accolade, Zelda had her husband’s number when she wrote, “You were literally eternally drunk.” The Fitzgeralds shared a bed, bills and a deep love of Gin Rickeys (gin, soda and lime juice). Although Cole Porter sang, “I get no kick from Champagne / Mere alcohol doesn’t thrill me at all,” he must have christened the Sea Pea (anis, tonic and lemon juice), as it was created in his honor at his favorite Parisian bar, le Cambon. Hemingway was drinking at the top of his game during his Paris years and did a lot of reconnaissance in the Ritz—or at least the bar—and legend has it that he celebrated the end of the Second World War by liberating Shakespeare and Company then carousing his way over to the Ritz, knocking back fifty-one Dry Martinis before reeling down the stairs to liberate its splendidly well-stocked cellars. So much has been written about him by experts, expats and ex-wives, this little cameo doesn’t do justice to the man or the myth; he deserves at least one entire column dedicated to him, if not an entire year.

Recently, in pre-celebration of this March Apéritif moment, I was at a party with my good friend Pierre (name changed to protect the innocent) who makes lumberjack plaid look aristocratic and holds the distinction of being The One Who First Served Me A Sidecar And Told Me How To Make This Staggeringly Good Vintage Cocktail (Cognac, Cointreau and lemon juice). He’s also the one who told me that the Italian version that includes Limoncello was nothing more than a peck of lays, pack of lies, and whose text to me later that same night read, Thanks 4 coming! Drink & flours!

You lack wanderfoul darling! Pierre knows just how to make a girl swoon more than any Monkey Gland (Gin, absinthe, grenadine and orange juice, a delightfully anesthetizing cocktail from the 1920s named after “a surgical technique of grafting monkey testicle tissue into humans with the intention of producing longevity,” according to impeccably reliable source Wikipedia). 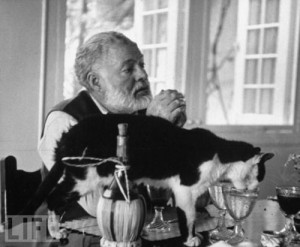 Another friend, Anne, (whose name has not been changed to not protect the not innocent), recently asked, “Wait a sec—you write a column about happy hour drinks and dead French writers? Sounds totally BO-ring. What. Ever.” A stiff Death in the Gulf Stream, Hemingway’s own potent potable, could possibly help untwist her knickers. A cocktail to be taken from eleven o’clock in the morning, it was created in 1922 in London—or was it 1937 in Key West?—such blurry beginnings . . . Hemingway might suggest you just drink it, not date it. He notes that, “Its tartness and bitterness are its chief charm[s].” (Not unlike Anne.) He continues, “Take a tall thin water tumbler and fill it with finely cracked ice. Lace this broken debris with four good purple splashes of angostura, add the juice and crushed peel of one green lime and fill the glass almost full with Holland Gin. . . no sugar, no fancying. It’s strong, it’s bitter . . . reviving and refreshing; it cools the blood and inspires renewed interest in food, companions and life.” And renewed interest in making it home alive—no sugar, no fancying necessary.