Liu Xia — the first poem of hers that filled me with wonder was “One Bird Then Another,” written in May 1983. Recently, I was filled with grief, when I read her poem about a tree, “How it Stands,” written in December 2013. Between the two poems, thirty years had passed.

What happened in between?

When we first met, we were very young, and knew nothing but writing poetry. The bird called Liu Xia lived in a large cage-like room on the twenty-second floor of a building on West Double Elm Tree Lane in Beijing. I traveled from Sichuan to meet her and climbed up the stairs as the elevator was broken. From the moment I knocked on the cage door, Liu Xia never stopped giggling. Her chin was pointy when she smiled, and she laughed like a bird, unrestrained. No wonder she wrote this:

Then, we started to hate winter,
the long slumber.
We put a red lamp
outside overnight
so its light would tell our bird
we were waiting.

Even earlier than all this, in 1982, she sent me a poem about a small lamp by the Great Wall glittering in the vast darkness. The glittering was also, perhaps, the eyes of birds. In those days, Liu Xia had a portrait of the American poet Sylvia Plath above her bed. So we talked about Plath’s three suicide attempts. The woman who could “eat men like air” played a game of death. What if she had died accidentally; what if there had been a gas leak; what if the gas repairman was just half an hour too late? Talking, we giggled for no good reason. Tears fell while we were still laughing. We were young, and we could laugh at death, whether we wanted to criticize it or praise it, we laughed and laughed, with wisdom or dementia, uncontrollably. Perhaps human beings should give up language, become birds and fly into the sky freely, stopping on trees to feed on insects when hungry — wouldn’t that be enough? 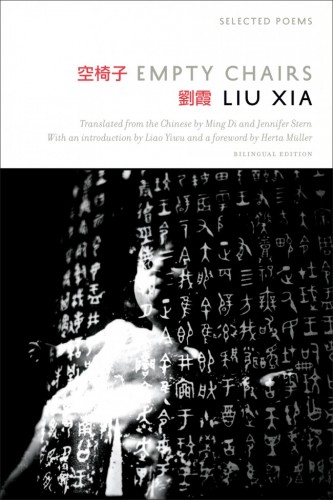 But then, in 1989, the violence at Tiananmen broke out, and many young people were killed. They might have, like us, at one point, laughed at death. Their souls climbed out of their bodies, which were perforated by bullets, like unseeable birds and flew before the eyes of Liu Xia and Liu Xiaobo. And so, through sleepless nights, the two were tied together, nested in each other’s souls. Liu Xiaobo, despite having been jailed many times, continuously wrote poems and letters, clinging firmly to Liu Xia as his nest. This Nobel Peace Prize winner could tolerate the loss of freedom, but not spiritual solitude — I suppose it’s man’s nature. In a way, Liu Xia has been forced into being Liu Xiaobo’s wife and his mother. They don’t have children — which is the best way to live in a totalitarian country. Someone who goes to jail repeatedly relies on being taken care of inside and outside of the high walls.

Ten years ago, in my introduction to the Selected Poems of Liu Xiaobo and Liu Xia, I quoted the following lines:

I still think these are the best lines from Liu Xiaobo’s poetry. But they are cruel, too cruel. Liu Xia’s nature is to be an unrestrained bird. But because of the burden of his ruthless, extreme love, this bird that longs to fly has been imprisoned in a cage. In the old days, the cage was bigger; we were able to meet each other and laugh foolishly, unbridled. After hanging out with Liu Xia for a while, I could drink at her level, which made Xiaobo envious. In the winter of 2007, I wrote: “From the beginning, when I was just a little over twenty and had hardly ever tasted alcohol, Liu Xia was my drinking master. It was hard to measure how much she and her best friend, an unexpectedly good drinker as well, could consume. They both liked to laugh at men while they drank, ordering the famous Liu Xiaobo to open bottles for them. There were several times when Liu Xiaobo refused, pretending to be angry, but then he would be coerced back into the role of servant. He laughed, hey-hey-hey-hey, trying to please everybody, clumsily. When Liu Xiaobo’s knowledge and education and his courage were completely torn apart, he would simply give up what he did best — writing articles and giving speeches. He would drink water at the liquor table, singing popular songs from the 1980s, one after another. He sang so terribly, so off-key, and while he sang his throat hummed involuntarily, which made his listeners want to quit living. The more so, the louder he sang. And he had memorized the lyrics so perfectly. Before the sensational climax of a song, he would inhale, then exhale. He enjoyed himself. I forgot who said ‘The best poem is one that makes pigs cry out.’ I believe, pigs would scream if they heard Comrade Liu Xiaobo’s songs.”

Then, because of Charter 08, he went to jail for the fourth time. Then the Nobel Peace Prize. And then a deadly eleven-year prison sentence for Liu Hui, Liu Xia’s brother, due to his so-called economic offenses but obviously due to his relationship with Liu Xiaobo. What’s the matter with this country?

Liu Xia’s burden has become too heavy. Her heart is beginning to fail. In isolation, she can only stare at a tree through her window, a tree that a bird can only dwell on:

Is it a tree?
It’s me, alone.
Is it a winter tree?
It’s always like this, all year round.
……
Aren’t you tired of being a tree your whole life?
Even when exhausted, I want to stand.
Is there anyone to keep you company?
There are birds.
I don’t see any.
……
I’m so old and blind I wouldn’t see them.
You don’t know how to draw a bird, do you?
You’re right. I don’t know how.
You’re an old, foolish tree.
I am.

She is no longer the bird she once was, the one that flew high to Tibet, alone; the one that made circles around Lake Namtso, the mirror of heaven; the one that laughed until out of breath. Instead, she became a tree. She can’t move her own nest — Liu Xiaobo can’t move, so she can’t either. She’s turned from a bird into a tree, her feathers becoming white and withered. But as a tree she still sings the songs of birds.

When a bird is dying, her singing is sorrowful.
These are the only songs, the dying songs, of Chinese poetry since June 4th, 1989.

Escape, Liu Xia, I know you can.
If Liu Xiaobo learns about it from jail, he will support you — your change from a tree back into a bird.

and I cook enough dishes to cover the table—

remembering to put salt in each.

without even drinking wine.

Everyone is happy and eats chicken feet

until the bones are sucked white.

At dawn, our friends are suddenly gone

The sunflowers on the window curtain

are jammed down our throats.

Without looking at each other

we climb into bed.

Living with dolls, the power

of silence is omnipresent.

The world opens in four directions,

and we communicate with gestures.

In the shadows, in silence, an imaginary

Do not open your mouth or the illusion

will disappear in the blink of an eye.

Darkness constantly falls around me

regardless of the time.

A doll turns her back to me

to stare out the window for a while.

The dazzling white of the snow

but she refuses to close them.

Love is so simple yet so difficult.

I’m moved by her

and my silence deepens.

I must guard these

as if guarding our life. 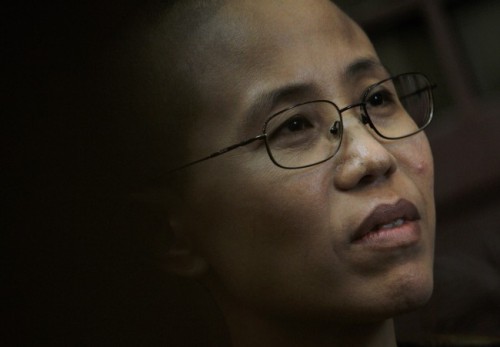 It’s Only Waking Up

I live in the bodies of the dolls

who kill themselves over and over in dreams.

When I wake up

I find myself not reborn

but only waking up.

Sometimes in front of other people

the kind of arrogant face

I’ve had an epiphany.

that I sit alone with a single light at night

at the same time.

Wind has been blowing the curtains,

but who can prove

A Soul Made of Paper

Born in the dark hours,

I’m not concerned with what’s waiting

for me after death.

in this world. The more magical a creature is,

the more it should display its strangeness.

I’m not a madwoman.

A beam of light reflects off my hands,

getting rid of what stands here,

I observe all obtuse symbols

and hear a voice in my ear—

the child who refused to be born,

he clings to my hands, tight.

Each time I try to push him away,

he twitches and curls

and flies to the stars.

I indulge in singing absurd

and monotonous songs from childhood,

and my sadness numbs.

Mice return to their cave

and I discover a strange

They are turning into animals.

is made of paper.

I Copy the Scriptures

Before winter comes, before the leaves fall

completely, I want to finish writing

every word with my heart at attention,

for my friends who have given me warmth.

But winter has come too soon.

Wind has blown away the trees’ clothes.

I don’t know why

my friends are gone, quiet.

It proves that I have not gone entirely

Insane, but the tree I drew

Liu Xia is a Chinese poet and artist, born in 1961 and raised in Beijing. She started writing poetry and short stories in 1982 and published in major magazines such as Poetry and People’s Literature in China, but she stopped publishing after the 1989 Tiananmen incident. She worked for the Beijing Tax Bureau until she quit work in 1993 to become an independent writer. Liu Xia has also made more than 300 paintings, and since 1996 has devoted herself to black-and-white photography. She met the writer and critic Liu Xiaobo in the early 1980s at a literary gathering; they married in 1996 while he was serving a prison sentence. Liu Xiaobo was first jailed from 1989 to 1991 due to his involvement with the June 4th student movement. He was detained without trial in 1995, then sentenced to a three-year imprisonment from 1996 to 1999. Because of his participation in drafting Charter 08, a pro-democracy manifesto, he was sentenced to an eleven-year prison term in 2008, which he is still serving. He was awarded the Nobel Peace Prize in 2010, at which time Liu Xia was placed under house arrest. She remains unable to leave her home and with very restricted contact with the outside world. Selected Poems by Liu Xiaobo and Liu Xia was published in Hong Kong in 2000, which was Liu Xia’s only official publication after 1989. The Silent Strength of Liu Xia, an exhibition of her photographic work, traveled to several countries in her absence. Empty Chairs: Selected Poems (Graywolf Press, 2015) includes her poetry over thirty years from 1983 to 2013.

Ming Di was born in China and lives in the United States as a poet and translator, author of six collections of poetry in Chinese and four volumes of translation. A selection of her poetry has been translated into English, titled River Merchant’s Wife (Marick Press, 2012). She edited and co-translated New Cathay: Contemporary Chinese Poetry (Tupelo Press, copublished with the Poetry Foundation, 2013).

Jennifer Stern is the pen name for an American poet and translator who has published one volume of poetry in English. She has worked as an editor and has translated poetry from several languages.

Out of Disorder, Into Pink Vinyl