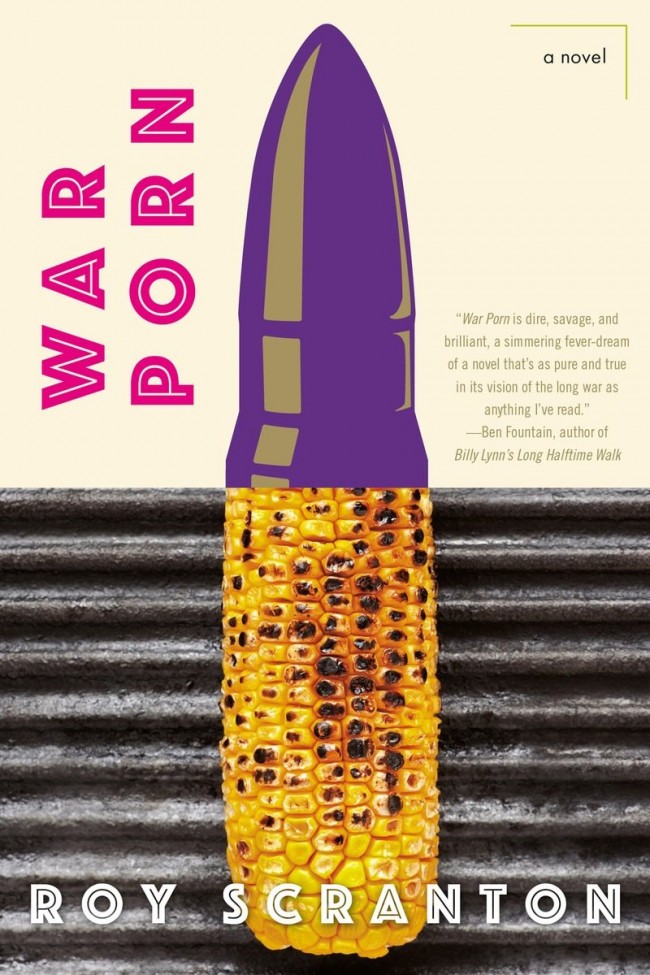 Roy Scranton: The “babylon” sections are the connective tissue holding the different narrative strands of the novel together: the collective unconscious, as it were—as if the Global War on Terror could dream. It’s largely a mash-up of different discourses about war, journalism and epic, song lyrics and movie quotes, press briefings and military handbooks, a lot of found text mixed in with different bits of my own. I was inspired by the prose poetry tradition going back through French surrealists such as Eluard, Cendrars, and Ponge, but the more direct antecedents are William S. Burroughs’s “cut-up” technique and John Dos Passos’s “Newsreel” sections in the USA trilogy. The book is about our narratives of war, language and war—one of the meanings of War Porn—so it’s almost inevitable that poetry would come into it. What is that Pound said—epic is a poem with history in it?

For many years, I’ve been trying to understand what Wallace Stevens wrote in his prose statement on the poetry of war, how the poetry of war and the poetry of the work of the imagination are two different things, and I knew that it had to have something to do with what he was trying to make sense of when he wrote in Notes toward a Supreme Fiction:

Soldier, there is a war between the mind

And sky, between thought and day and night. It is

For that the poet is always in the sun,

Patches the moon together in his room

To his Virgilian cadences, up down,

Up down. It is a war that never ends.

There’s a lot to say about this bit of poem, from which I take War Porn’s epigraph, but what might be most useful is to notice the correspondence Stevens is suggesting: Both war and poetry are ways of remaking reality, one in blood, the other in words, and these ways of making (poiesis) are in conflict. They are two kinds of poetry, the poetry of war and the poetry of the work of the imagination, and they are not only different things, but antitheses.

There are a lot of poets in War Porn: Wendy is a poet, Othman is a poet, and of course Wilson is a failed poet. All of them struggle to fight their poetic war, the war between the mind and sky, against that other war, the violence that rends lives and souls. At least one of them loses. I don’t know if any of them win. But the thing about the war between the mind and sky is that “it is a war that never ends,” in part because mind and sky are mutually constitutive, in part because there is no mind and there is no sky. There is only matter and perception.

NF: Another poetry flash: Early on stateside, the poet Wendy, who’s dating Aaron—just home from the war—tells a long story about a coyote, which seems a type of duende moment.

RS: In Wendy’s coyote story, she talks about hitting a coyote on the road but then not finding any trace of its body. Later, the coyote reappears at her home as if haunting her. In telling this story to her friends, Wendy’s trying to process and explain something to herself about her relationship with Aaron, but the way she does that is through this dramatic self-representation: she wants to keep other peoples’ interest. Or maybe the coyote is a duende, which might be another way of saying metaphor, another way of saying magic. One of the pleasures of writing fiction is that I don’t feel an obligation to discriminate between reality and imagination. I don’t have to pick a side in the war between mind and sky. I don’t even need to know what really happened, because all I need to know is what the characters see and believe.

NF: Most of what we see of the American occupation is through Private Wilson’s eyes. The first Iraq scenes are literally a series of wrong turns, attempting to drive to Baghdad. It’s incredibly tense and nothing really happens. Nothing of the glory of war here. Why show the war through the eyes of somebody who already seems so cynical?

RS: I knew a lot of cynical guys in the military, and I knew a lot who just wanted to do their time and get out. Really internalizing military values, at least in the Army, takes a while, because complaining and resentment are practically sacred rights among the lower enlisted, especially when it comes to complaining about officers. You can go back to Bill Mauldin’s Willie and Joe cartoons from World War II, right, Kilroy was here, even Beetle Bailey—or Bill Murray’s character in Stripes, Matthew Modine’s Joker in Full Metal Jacket. There’s a tradition of acerbic alienation within American military literature, and I see Wilson as part of that tradition. It’s one of the few ways we have in this country to talk about class. 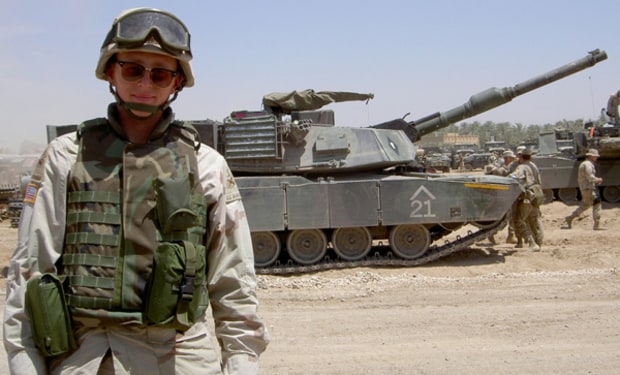 At the same time, I wanted to present the war as I saw it, which was as a private driving a humvee in Baghdad. And the war I saw was a complete shitshow. What struck me most about what I saw in Iraq was how stupid the occupation was, how negligent the planning that went into it, how idiotically and wastefully it was run. The horror of the war might be in the fact that it was unnecessary, based in lies, all about oil, and a flagrant violation of international norms, but I think, for me, at the end of the day, it’s in the fact that hundreds of thousands of innocent people died because of American stupidity.

NF: And just when it seems we’ve had enough of this beautifully rendered meaninglessness (why is the US in Iraq? what are we doing there?), we shift into a novella about life in Baghdad just before the bombing begins. The main characters are now Iraqis. Can you talk about this transition?

War Porn’s narrative arc is really about Qasim, the Iraqi mathematician at the center of “The Fall,” which is the center of the novel, even though the structure goes from Utah in 2004 back to Iraq in 2003. We see Qasim go from his life teaching math to Iraqi university students before to the war to his life as an interpreter working for the Americans to his capture and torture at the hands of American military police. This is the story of what happened to Iraq under the American occupation. We promised them freedom and democracy, then offered them sectariaism, rapine, and violence. Maybe that sounds polemical—some reviewers have thought so—but those are the facts of what happened. In any case, War Porn isn’t about harrowing the American soul as much as it is trying to understand something about what we did to Iraq, what that country lost, what its people suffered, and to see how that truth lives alongside Wilson’s truth about himself as a soldier, and Wendy’s truth about herself as a poet, and Aaron’s truth, and so on. Qasim doesn’t have a privileged access to reality just because he’s an Iraqi victimized by the American occupation. He too has his war between the mind and sky. There’s still the mind and sky. And the war’s still going on, tearing lives apart, whatever we might think about it.

NF: The big question for me—since I read this as an anti-war book—is that delicate balance: how to write an anti-war book that doesn’t become a pro-war book, by the very fact of how language can aestheticize life. One of the only great anti-war films, to my thinking, is Hal Ashby’s Coming Home. In that entire film only one gun is lifted, aimed, then lowered, unfired…. is the only way to be truly anti-war to not pick up a weapon in the first place? Or is something else possible?

NF: Right: Suddenly, at the end, we are in the midst of serious consequences, and those consequences have come home through Aaron, the returned soldier. Then the book simply ends… Can you talk about why you ended the book this way?

RS: I wanted to fuse the generic expectations readers might have, given the dramatic structure, for some moment of redemption or truth or resolution, with a sudden, destabilizing act of violence that, in retrospect, appears totally inevitable. I wanted readers to feel complicit in the violence, implicated by their narrative desire, and I wanted to fuse that with the torture inflicted on Qasim’s body and the torture inflicted on our language by the Global War on Terror. How could I resolve that confusion, with the war still going on? How could I pretend to untangle the knot of race, sex, power, language, and violence that is America’s 21st-century Forever War, when that knot lives inside each of us and ties us all together?

Nick Flynn has worked as a ship’s captain, an electrician, and as a case-worker with homeless adults. His most recent book is My Feelings (Graywolf, 2015), a collection of poems.

Ordinary and Exalted: An Interview with Claudia La Rocco

The Do-Over: An Interview With Kathleen Ossip