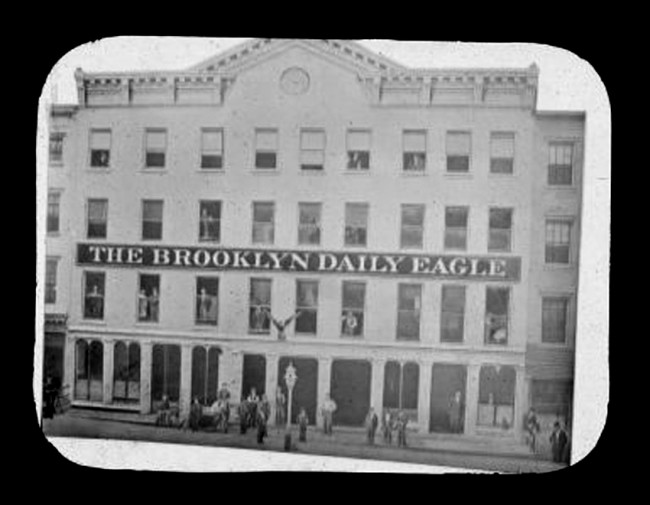 In 1846, twenty-six-year-old Walter Whitman got a plum job as the editor of the Brooklyn Daily Eagle. 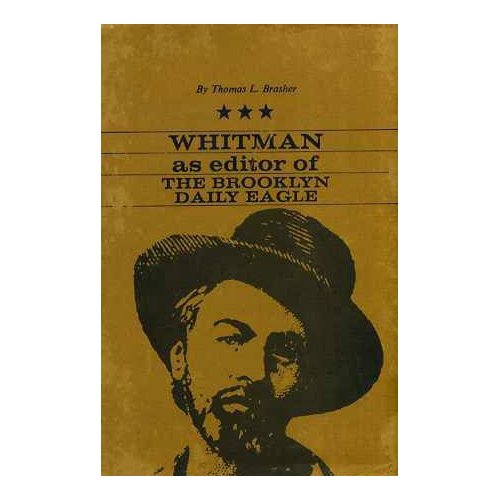 At that point, Whitman could already boast a long journalism career. Apprenticed to a typesetter at fourteen, he spent his adolescence and early adulthood writing political opinion pieces, reviewing theatrical and musical performances, and generally reporting on life on the street. During his career at the Eagle, Whitman was responsible for writing at least one column every day. In two years, he wrote over six hundred pages, a torrent of essays that mixed reportage, personal reflection, and outright polemic. He had already been experimenting with the conventions of the English language, borrowing the slangy rhythms of the working men and women he heard on the streets, but a deeper development was also taking place. Through his journalistic writing, Whitman tapped into the primary concern that would later become the backbone for his poetry: the idea that personal growth emerges from profound empathy and that this self-transformation can be achieved through art.

The Eagle offices were just blocks from the East River and the Fulton Ferry, where the Brooklyn Bridge would be built 37 years later. Whitman had not yet adopted his costume of the “working rough”—hat tipped back, jacketless, with his sleeves rolled up in the fashion of writers and typesetters. As a young editor, he still dressed like a bit of a dandy in a three-piece suit with his shirt buttoned up, cravat fluffed, and hat firmly on his head. After finishing work about midday, Whitman frequently took the ferry to lower Manhattan to walk along the Battery, following the sea. (Herman Melville also made a habit of walking along the Battery to court inspiration, though the two never met, and Edgar Allan Poe also haunted the Battery, but Whitman, who thought Poe “very kindly and human, but subdued, perhaps a little jaded,” never recalled crossing paths with him.) Whitman’s daily columns often drew on material he gathered during these walks, characteristically focusing on the Brooklyn and Manhattan working class. His essays are a celebration of both the city’s infinite variety and the variety of his responses to it.

Whitman’s columns typically begin tightly focused on his subject and expand, like an aperture opening, until they include the writer in the scene as well. He goes beyond observation and reportage, beyond details observed or imagined; he tries to feel his way into the subject’s mind, to understand what it felt like to sicken and die on a slave ship, or waste one’s youth in a windowless factory. (One piece on the benefits of outdoor exercise for factory workers led Whitman to become a booster for the establishment of Fort Greene Park.) In “Autobiography of a Brooklyn Lamp,” Whitman even manages to empathize with a Brooklyn lamppost filled with discount fuel: “I found that the poshy substance on which I had to depend for life, was a humbug. Accordingly, I went out;—and though the people I passed were full of jibes when they looked up at my glass house, I confidently defied them to make light of me.” 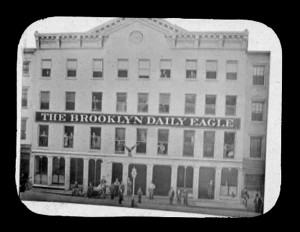 Some of his most impassioned columns took up the cause of working women, arguing that women were forced into prostitution and other crimes by the few, and unattractive, employment options available to them. He was also deeply offended by the slaves’ loss of personal liberty, and his democratic values led him to view slavery as a personal affront. Evoking a slave ship, he wrote: “Imagine neither food nor water given these hapless prisoners . . . dozens of the poor wretches dying and others already dead (and they are most to be envied!)—the very air so thick the lungs cannot perform their office—and all this for filthy lucre!”

Although Whitman was writing anti-slavery articles in 1846, many Americans thought Congress had already put the issue to bed with the Missouri Compromise of 1820, which established North and South to ensure equal representation in Congress by slave-holding and free states. But Whitman’s anti-slavery views reached a boiling point in 1847, as the United States government anticipated the acquisition of new territory as a result of the Mexican-American War and the country debated whether this new land would be settled using slave labor. House Democrats introduced the Wilmot Proviso to ban slavery in these and all future territories, but Senate Democrats, hoping to court Southern support during an election year, killed the bill.

Whitman was incensed. Through the end of 1847 and into 1848, he daily denounced the Democrats who refused to stand up for their party’s original principles. Slavery was a moral blight, Whitman wrote, but it also undermined democracy more generally, degrading the value of human labor and taking bread from workingmen’s mouths. Whitman published these articles knowing that the owners of the Brooklyn Eagle supported the majority Democrats’ decision to strike down the Wilmot Proviso. Though other large newspapers, such as the New-York Tribune, made no bones about combining opinion and reportage in the same article, Whitman’s use of the Eagle as a pulpit for his liberal democratic beliefs stretched the limits of newspaper writing in that day. It was one thing to speak up for limited working hours for clerks; it was another to ask his readers to imagine themselves slaves.

By collapsing the distance between himself and the “less fortunate,” whom he considered his main subjects, Whitman undermined the American idea of success—one that mingled the justification for European caste systems with the democratic “up by your bootstraps” ideal. Any American could make it if he worked hard enough and did right by God. This meant, through a common, circular logic, that those who had made it were necessarily the fittest, both physically and morally. One could pity the less fortunate but one should not aspire to become them.

Whitman’s daily writing wasn’t just polemical; he also expanded arts criticism in the Brooklyn Eagle. Just one generation removed from the founding fathers, Whitman saw the arts as both a spiritual and a national imperative. It was through the arts, he wrote, that America would develop her own unique culture, a culture to rival Europe’s. Whitman looked particularly to the theater—then a hybrid of “high art” and popular entertainment—as a cultural melting pot through which America could distinguish herself and from which working-class “men of genius” would arise.

One of Whitman’s men of genius was a woman, an American actress named Charlotte Cushman, who had entered the stage at nineteen to support her mother and two siblings. Cushman was young, plain, and stocky, and, like Whitman, would never marry and was likely gay. Whitman was one of the first reviewers to proclaim Cushman a star; by the outbreak of the Civil War she was a household name playing to packed houses.

Cushman became famous in large part for her portrayal of men—Romeo, Hamlet, Macbeth, Henry VIII. She was, Whitman noted, a genius at transforming herself. “[Cushman] seems to identify herself so completely with the character she is playing,” Whitman marveled, “she loses, for the nonce, every attribute, except those which enter into the making up of what she is to pourtray [sic]. And particularly does she enter into the mental peculiarities of the played character.” This talk of “entering into” a character is exactly what Whitman was trying to achieve in his own writing—not merely understanding the emotions of another being, but becoming, as Cushman did, almost entirely fused—if only briefly.

In the temporary transformation that Cushman demonstrated onstage, Whitman glimpsed the possibility for complete transformation.  Whitman writes that a great artist can evoke “The strange and subtle sympathy which runs like an electrical charge through human hearts collected together,” recognizing that this transformation can extend beyond the experience of the artist to transform those watching from the audience, or listening to an aria, or reading a book.

In January 1848, after two years, Whitman was fired from the Brooklyn Eagle, whose owners cited political differences. Though it would be another seven years until Whitman published the first edition of Leaves of Grass, he had already begun experimenting with writing poetry and fiction (several of his short stories, as well as a few poems, appeared in the Brooklyn Eagle). Whitman’s writing had benefitted from the practice of putting out a daily column for a public audience—his ideas on moral issues had become more defined and his aesthetic appreciation had deepened.

Over the course of his work for the Eagle, Whitman wrote as though each person he encountered became part of his self and endowed him with a greater understanding of humanity. He honed an ability to empathize with everything that moved and much that didn’t. That responsiveness offers the chance of transforming oneself by trading places with another—for Whitman, empathy is both wonderfully generous and entirely self-interested. In his writing for the Eagle, Whitman seems to understand himself by recognizing his own ideas and desires in those around him. This intercourse between artist and audience, self and other, became crucial in the next phase of Whitman’s writing life. As Whitman himself would write in an early notebook fragment of “Song of Myself” (a poem he later included in Leaves of Grass): “I am your voice—It was tied in you—In me it begins to talk.”

Tana Wojczuk is an essayist and critic whose work can be found in literary and online magazines like Tin House, The Believer, Lapham’s Quarterly, Bomb, Guernica, Narrative,The Rumpus and elsewhere. She is a nonfiction editor at Guernica Magazine and a lecturer in Undergraduate Writing at Columbia University. You can find her on twitter @tanawojczuk.