I made the decision to purchase Providence of a Sparrow during a prolonged sit on a public toilet. Powell’s bookstore used to keep book posters in frames in the bathroom of their store on Hawthorne. The poster had been collecting people’s names and little promises of love in Sharpie graffiti for months. The image was the same as the hardbound book cover: a man’s hands protectively cupped around a songbird. It reminded me of my father. When I finished the book, I sent it to him, still in my childhood home in Maryland.

My father used to work in a building with enormous glass windows. Birds rammed into them thinking it was mere air. Aggressive red cardinals in bright mating-plumage concussed themselves attacking their own images. My father would hear a sharp thump!, then go out to investigate. If the bird was still alive, he’d put it in a box and bring it home for recuperation. Our most honored houseguest was a male rose-breasted grosbeak, an uncommon Maryland summertime resident related to a cardinal. 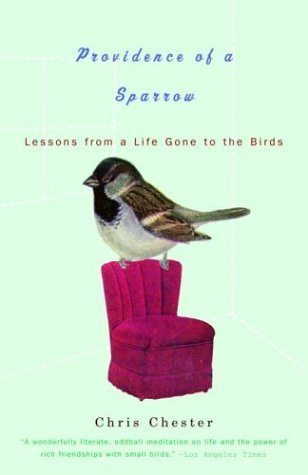 “They’re normally found at a higher altitude,” my father explained. “I guess he’s on his way back from South America. He ran into the window, stunned himself, and was flopping around. Then he flew into the window again and I grabbed him.”

The grosbeak was a little smaller than a robin and had a black tuxedo and a red ascot. He was seldom interested in my encouraging words, and, like all the other wild birds, did not want to be friends. He was one of the lucky survivors. My father released him in the woods surrounding our house.

There’s not much a non-vet can do for an injured adult bird except put it in a dark quiet place and keep it away from predators. We could give it some birdseed and water if it was a seed-eater (the grosbeak was), but it usually wouldn’t eat under such circumstances (the grosbeak did). This is how I learned the body is its own healer, that good intentions have no physiological power, and that patience is the gateway between celebration and mourning.

In Providence of a Sparrow, a sparrow literally falls into author Chris Chester’s life. A tiny “naked blob of flesh” hatchling, like a “testicle with a beak attached” with bulbous closed eyes, tumbles (or was pushed by overwhelmed parents) out of its nest from the eave of Chester’s home in Portland, Oregon, and into a bed of irises in a cold, wet June.

The Audubon Society won’t take the baby bird because it is an invasive English sparrow. Chester and his wife Rebecca keep the bitty thing alive in a small box with a heating pad. On the advice of an expert friend, they raise the hatchling on puppy food delivered at the end of a toothpick. The bird needs feeding every half hour during daytime. They take turns taking the avian infant to work with them. English sparrows mature in two weeks. In that short time “I swear I could see his mind forming,” Chester writes. The sudden arrival of this odd new companion put Chester’s longstanding depression into remission.

They call their adult male B, short for Birdbrain, but B’s little brain is far more sophisticated than anyone knew. In a radio interview Chester described B as a self-aware, “thinking being existing in time.”

When I consider avian intelligence, I think of corvids like observant ravens, persistent crows, and trickster jays. I think of parrots like my family’s peach-faced lovebirds, Rainbow and Crystal, who would let themselves out of any cage door that wasn’t wired shut and overturn plastic flowerpots to ram against each other like ironclad battleships. I think about the tool-creating, wheedling, and lunch-stealing alpine keas I saw while hitchhiking in New Zealand. Or the clever linguist Alex, the famous African Gray. I overlook the common birds in the bushes. 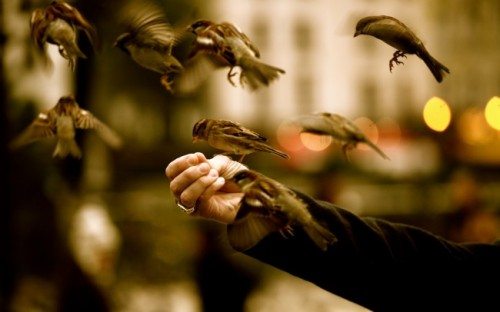 English sparrows are ubiquitous wherever there are humans. They’re the crowd of little tan scavengers hanging around outdoor food courts, snatching up pieces of cold French fries. The males are fairly easy to identify (at least to me) with a ruddy maroon back and half-circle black bib under their necks. To a casual observer, they are opportunistic but not plainly capable of strategic planning and cooperation.

Mammal intelligence is associated with a well-developed cerebral cortex. In comparison, birds have puny cerebral cortexes. Yet Chester clearly regards B as more intelligent than the smartest nonhuman mammal in the house, his cat Marlowe, who is discerning enough to know which belongings are Chester’s and which belong to Rebecca. When Rebecca first moves in, Marlowe collects Rebecca’s smaller objects, like makeup and shoes, and places them next to the door in protest when she first moves in.to protest her moving in.

B can identify and retrieve his favorite toys (bottle caps) based on their color by request. He invents and reliably repeats distinct games to play with Chester and Rebecca. He appears to know his favorite foods by their human names. Chester learns some of B’s sparrow language. Chester can distinguish individual sounds for “please,” “thank you,” “come back,” and “don’t move,” a very important expression for a 25-gram, easily crushed bird. While Chester writes his memoir, B enjoys pecking on the keyboard, checking the screen for the changes he makes. One day, when the power goes out, B flies up to the light switch and hovers, inspecting its position. The lights are off but no one has flipped the switch—not what B expects at all. Chester and Rebecca acquire finches and canaries in misguided attempts to give B some bird friends, but he demands solely human affection and attention. They turn their upstairs into an aviary because B is the bookmark-stealing, chest-snuggling, head-riding friend, not an unthinking creature to be confined in a convenient cage.

In the span of two years, Marlowe, Chester’s father, Chester’s sister, and Rebecca’s mother die of cancer. All die of cancer that was discovered too late. Chester’s father suffers agonizing abdominal pain for years and his sister has what is diagnosed as an infected toe for months. Chester believes both could have had better outcomes if the pain they endured had been taken more seriously by doctors.

As Rebecca grieves her mother, a new baby sparrow appears. This one they call Baby and he bonds with Rebecca. Just as B was a stabilizing guide through emotional torment for Chester, Baby’s demands for love prevent Rebecca from slipping away into despair.

Chester and Rebecca’s friends and family think their dedication to their birds is the result of a “virtual Niagara of misplaced parenting impulses that could be directed more profitably toward rearing offspring. “It’s too bad they never had children,” my father told me. “Their ability to predict and respond to the nonverbal needs and desires of their birds would make them good parents.” My father understands that I have no urge to have children but I think he was insinuating that I would also make a good parent.

I have lived with anxiety and depression since my first mother, my biological mother, died of lung cancer in 1991 at the age of 39, shortly before I turned seven, two years before Chester found B. Chester required an intervention for his depression, but decided against medications, concerned that they would change a fundamental element of his personality.  I avoided medications until I was 20, because like Chester, I worried I’d become intrinsically altered. I think I have been.

When I discovered Providence of a Sparrow, I had recently capitulated once again to taking medication to blunt my frantic anxiety and assuage my immobilizing depression (which sometimes hybridized into frantic depression and immobilizing anxiety). I was encouraged by my biochemist father. He has been medicated for depression for decades.

Providence of a Sparrow won the Oregon Book Award in 2003, but there has never been another book by Chris Chester. He died in 2007 at the age of 54. When B shuffled off his mortal coil, the joy that preserved Chester from the claws of depression was gone. He no longer wrote. After three difficult years, Rebecca ended the marriage and moved out, although she remained one of the few people he maintained contact with. He stopped cleaning the birdshit from floors and furniture. His jaw hurt all the time.

I know that terror.

Chester never went to the doctor. One day something broke inside his neck. He bled too much. He died in the ambulance from cancer never known and never treated. Rebecca came to get the birds. She still lives with sparrows.

Calling from Maryland, my father tells me that a pair of cardinals is trying to teach their stubborn fledglings to use their wings. At night, barred owls growl in territorial disputes.

I am 32. I own a house in Portland and live with a partner. The northwest corner of our lot is the territory of a pair of amorous native song sparrows. They have claimed our brush pile as a strategic post and roost in the row of junipers.

They make a nervous “chit chit chit chit” as the neighbors’ cats stalk around the yard, but they have grown accustomed to us two humans and will perch atop their brush pile while we relax nearby on lawn chairs.

They impatiently wait for us to finish planting this year’s rows of beans, beets, and brassicas. They seem to believe we are churning the soil for their benefit, giving us the side-eye as if to say “Aren’t you done yet? It’s about time you moved along,” so they can pick worms, and grubs, and skittering insects from the loose soil.

I keep writing. I keep loving. And I take my meds.

Lauren Hudgins earned her MA in Publishing and her MFA in Creative Nonfiction from Portland State University in 2014. Living car-free, she bikes about the gloom of the rainy Pacific Northwest to keep her endorphins flowing. She works as a digital advertising strategist for nonprofits and progressive politicians. Keep up with her successes and failures on Twitter @lehudgins.