Translated from the original Georgian by Rebecca Gould

I dream of a horse race.

I mount my nag.

From every poem I know

only my shame remains.

Neither crusader nor knight,

my battlefield has fled.

Fly away with me, my dream,

do not linger, wretchedly.

My pool of blood stirs sadly.

Armed or weak, we swim in words.

We will battle fatefully.

Our fight will be brave.

Who will lance my wounds?

Who will pierce the bubble of my pain,

and release the fluid into the ocean?

When will my wounds be clean?

One word remains to this swan whose throat is slit.

She is the voice of my poetry.

I await her melody, my sad Agamemnon. 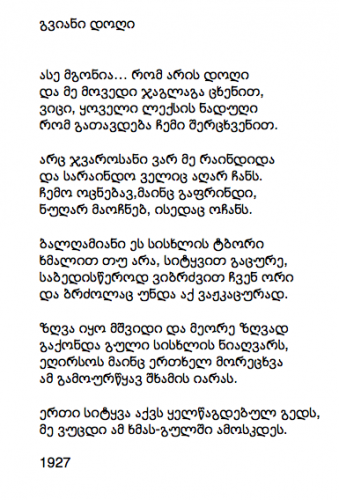 Titsian Tabidze (1895–1937) was one of most eloquent and innovative Georgian literary modernists of the twentieth century. His poems were translated during his lifetime by the Russian poets Boris Pasternak and Osip Mandelstam. Like many Russian and Georgian poets of his era, Titsian perished in a purge organized by Stalin and his subordinates. To date, Titsian’s work has only been systematically translated into Russian, but an interview with his daughter and granddaughter illuminates his struggles as an outspoken poet in a time of political oppression. His poems have appeared in English translations by Rebecca Gould in  Prairie Schooner, Seizure, Lunch Ticket, and RHINO.

A Cup of Cold Water