I am sappy when it comes to love. I’m one of the first in line for a romantic comedy, even the ones that are simply a distraction from the heat, rain, or mosquitos. John Reed’s wonderful new book Free Boat: Collected Lies and Love Poems gives me that same type of humor, love and quirkiness that I crave, while being a more interesting and fulfilling artistic experience.

Containing 54 sonnets intermingled with a continuous narrative and some of Reeds personal photographs, Free Boat takes you on a journey that you don’t want to let go of. Love poems with built in lies and upside down truths, in which you can find a story of your own— and how you think about relationships.

The narrative that runs alongside the sonnets is one part fiction, one part John Reed’s own history, and one part surrealist dream, a painting come to life. Which makes sense given the fact that Reed’s parents are both New York artists – painters.  There is a yearning in looking at a painting that’s akin to reading this book.

I met John Reed when I moved to New York to get a college degree at The New School, where he teaches. I never could clear enough conflicts in the scheduling to be in one of his classes, but I learned from every one of his books and the discussions we’ve had in the writing department. I’ve been to his readings in bars, parks, seminar rooms, and art galleries, where we all would stop from peering at paint and clay to absorb his carefully chosen words, spoken at a rate one can both enjoy and hold onto.

I was lucky enough to catch up with him over email right before the fall semester began.

Susan Marque: The first thing that strikes me is the title? How did that come about and are you suggesting that we all have lies we tell ourselves or that we see those we love through a kind of lie?

Free Boat. I would repeat it to myself. I’m sure by now I see more than is actually there: humor, meaning, pathos. I could do better on where the title came from. Years ago in Southampton, I was walking along with my to-be wife and we passed an old, decrepit boat on display. A sign offered: “Free Boat.” The last sign you’ll ever read.

SM: I find that I can read and reread both the poems and the narrative, enjoying more than I did the first time through. It’s like getting two books in one. Where did the idea of juxtaposing the forms together come from? How did this book begin?

JR: In the last few years I’ve seen more poetry/prose hybrid books. I confess that I don’t often think those kinds of projects come together. Usually the poems feel jammed in there, or the prose feels jammed in there. One of the problems with reading poetry, to me, is the overbearing nature of the poet, the biography of the poet. Identity—relating to our love and lies discussion—is experiential, yes, but it’s also self-imposed. A friend and colleague tweeted his summation, and I think he probably summed up my logic more succinctly than I could.  Would it be an indulgence to lean on him?

@easyreeder John Reed’s “Free Boat” is an incredible mix of vivd. contemporary lyrical sonnets and a prose demolition of them

SM: The main character mentions he studied both poetry and fiction. Is that true for you? Is that how you came to write a book with both? How much of this is memoir?

JR: I did study both. Hmm, how much of this is true? Can poetry answer that question? I guess all the poems are true. The prose? Good gracious. I don’t even know. It’s a love letter. How does one measure the deception in a love letter? 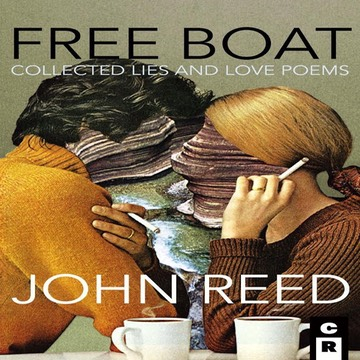 SM: What do you see as the role of experimental fiction and/or poetry in society? Neither seem to get the recognition of other forms of writing, and yet you are taking a specific type of poem – the sonnet – that stems from Shakespeare, and making it modern. Why? and Why now?

JR: I don’t really think of the project as experimental. The prose is a bit performative. I guess I’d concede “meta,” but that’s old hat. And sonnets of course, while associated with Shakespeare, have held their place in poetry for four hundred years. I began this sequence in maybe 2007, around the time I finished All The World’s A Grave (Penguin, 2008), which took apart the known works of Shakespeare and put them back together as a new play. I had the meter, I’d been working with that, so sonnets were something I thought I’d try. Their structural form is extremely appealing: succinct and elegant. And their logical structure is no less seductive; sonnets are arguments, concise arguments. Minus rhyme scheme, the sonnet is perfectly modern. I did make some adjustments to the rhyme.

SM: Why sonnets specifically though? You could have experimented with other forms, lengths, etc. Was it just from this work the idea sprung to create a series of them? Concise arguments around the theme of love?

JR: Well, I suppose there’s a bit of a confession here.  Prose writers tend to do better with structure, so, there’s that. The simple truth is that I have never felt entirely comfortable in any other form of poetry. On the other hand, I did look at other possibilities. But I found that the sonnet has evolved specifically into an English language form; I’ve heard it argued that it is the only classical poetic form to have done so. Beyond that, there is a content limitation to the sonnet which I don’t entirely understand; sonnets take readily to love, lust, rage and anger, and not readily to much else.

Maybe a little retrospection? The sonnet is not a form that works for every subject. Structure, in fictional narrative, is associated with genre. The more in the way of required structure, usually, the more genre oriented a project.  And genre of course tends to deal with big stories, big arcs and big themes: love, hate, etc. Maybe, and I’m just postulating here, the form of the sonnet takes on a semblance of genre, delineating the content space, but also making those big ideas possible. In these poems, I wanted a palette of primary emotions, so the sonnet made sense.

SM: Did you start out writing 100 sonnets and then decide which ones you wanted to print? Why the out of order numbering?

JR: I only included the best ones, the ones I thought were best. And I did rearrange them, just a little, for the book.

SM: Who chose the cover art? I find it so akin to the writing, was it commissioned for the book?

JR: I got to choose! C&R Press is using the same artist for all of its covers: maybe for a year or two. I chose the image from the artist’s portfolio.

SM: What it is like to examine and spend your days with what the back cover calls “The yearning that brings us together” and your fixation on Shakespeare? Do you think of yourself as his modern counterpart?

JR:The only writer I know with the temerity to regard himself that way is Arthur Phillips. But my guess is that with equivalent financial backing, and equivalent unfettered use of copyrighted materials, there would be many many people working at the level of a Shakespeare. There were maybe a few hundred people working in London as writers in the Seventeenth century. Today?  Worldwide? Tens of millions? Alas, we are none of us personally favored by the Queen, and we are all of us beholden to copyright laws enacted to promote corporate profit, not art.

SM: There are so many lovely moments in this collection, lines that made me pause, such as “An Angel, and a laughing Whiskey neat,” or “Death is a $20 holiday.” Do these things tumble out of you, or do you ponder each word choice and spend days with a page?

JR: That angel line was something I worked on. The later lines in a sonnet are almost always worked, because you have lines and rhymes behind you. The death line was the first line, and generally those lines were the result of me casting about, repeating a line to myself to see if it held up. Sometimes I’d be trying on a first line for quite a while—a week or more.  Tinkering. The first line or two of a sonnet will customarily present a thesis, or at least a very strong core idea. All of that said, I probably abandoned 2/3 of the sonnets I wrote—the thesis would have to prove itself over the course of the writing—and when I did finish a sonnet, I tended to finish within a day or two, and wouldn’t revise much after that.

SM: How did the question of identity come about that is a theme in Free Boat? Did you learn anything from looking at all of those other Reeds?

SM: In a culture that values commercial viability, how do you free yourself from those constraints (writing to what sells) to write the books you choose to write? Do you ever see yourself taking a piece like this and shaping it into a television series?

JR: I haven’t been able to fake it yet. What’s the series?

SM: I think this could be a TV show where the main character is looking for love, looking for all the people or things that have his name on them, and finds that his whole life has been made from the deceptions he chose for himself that stemmed from lineage and from love. With the rock band and the murder and the romance.  It’s like Twin Peaks meets Itself and turns inside out. 8 episodes on Netflix like Stranger Things (which I love despite not being a fan of bugs or monsters).

SM: How has your interest in photography and film influenced your writing?

JR: I’m not sure it influenced the writing. Well, maybe it did. There are over 50 sonnets in here, and that’s a dense read, one poem to the next. I wanted to aerate the pages, with prose and images.

SM: Is there anything else that you might like readers to know about the making of this book and your process?

JR: I’d love to hear from them.

Susan Marque is a freelance writer living in Manhattan, where she is currently juggling dating apps, discovering new eateries, and gathering stories.

Ask a Librarian: What’s the Strangest Thing You’ve Found in a Library Book?