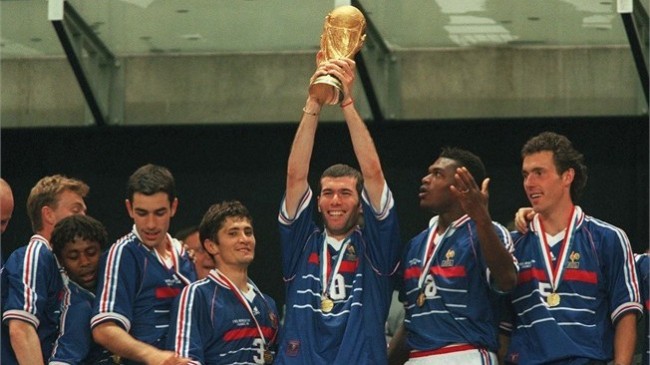 A couple weeks ago I got into a cab (grey 2008 Toyota, three hubcaps, broken air conditioning) and the radio was on and it was the World Cup match between Germany and Portugal and the commentators were commenting as fast as they could in French about the defense strategy of the Germans when, twelve minutes into the first half, forward Thomas Müller scored a penalty against Portugal’s goalkeeper Rui Patricio and the cab veered toward the sidewalk (to the right like Müller’s penalty kick) and I told the cabbie where I had to go, (“Don’t know it. You sure?” he said. “Can you check?”), but there was nothing to check, I knew the address was right and he was talking in a low voice to himself and “grumpy” wasn’t really strong enough to describe what he was acting like and I said, “So who’s the favorite?” And he looked up in the rearview mirror at me like, “Really, lady?” and I knew (thought I knew?) that these two teams were from what had been called by some the “Group of Death” along with the US and Ghana who were playing later tonight and so far between me and the cabbie it had just been a couple words but he could see that I was serious, but maybe what he couldn’t see was that I knew who was favored and what some of the odds were, that the German lineup included Khedira and Boateng and Lahm, but the cabbie was riveted to the voices of the commentators in a way that wasn’t “grumpy” at all but more enchanted and he said, “Germany’s favored, Germany,” and we were rolling (barreling?) through the streets placedelaBastilleruedelaRoquette dodging pedestrians (pedestrians dodging us?) because there had been some train strikes and plane delays and then a taxi strike (yesterday? tomorrow?) and construction work going in all directions, that starts in the summer here, like every summer in France. 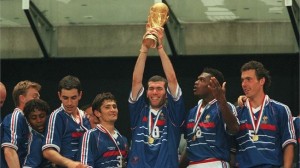 During the summer of 2006, with the World Cup in Germany, almost anywhere you went in Paris (café, bistro, friend’s apartment) the TV was on with the games or someone was covering the daily routine of les Bleus at their camp at the Schlosshotel Münchausen (sixteenth-century castle, renovated), or covering the coverage of a team that France would be playing. There was a lot of excitement after the stunning 1998 French win in the World Cup against Brazil (3-0, Man of the Match Zinedine Zidane with first goal in the first half at 27 minutes, the next at 45+1). Although no one had mistaken me for a sports fan before in my life, that July I started watching the games and haven’t stopped since.

The cabbie was thoroughly knocked out by soccer. He’d been a second division goalkeeper for years, he told me, on a team in a suburbs not far from here, as he drove (careened?) through the streets, he said, “Looky in there,” inside a Chinese restaurant with the doors wide open on the streets. People eating? Someone slicing lemons at the bar?  “No,” he said, “over there,” and pointed to the back wall of the restaurant right by the mural of the painted tigers (three of them, stylized orange and black stripes, mouths cracked back, some idea of “roaring,”) where a screen displayed the deep green gem that was the field, the two goals at either end of the field like netted shores, a tangle of players knotting and unknotting themselves in the late afternoon Brazilian sunlight. He didn’t see the street for the soccer in his eyes.  “Tu vois?” the cabbie said, “you see?”

His teams were, he said, In This Order: 1) France, 2) Italy (this was before their elimination by Uruguay and the game where striker Luis Suarez took a bite out of the shoulder of Italy’s defender Giorgio Chiellini, 3) Holland (a distant third for him and third place didn’t matter so much he said, but whatever, you gotta give a third place, it’s like some sort of balance you know?, but remember, he told me, you block Robben, you solved some math on the field”). I asked about the US team. “Hey there,” he said, only he said, bahh, alors, “you’ve got Klinsmann for a coach and he’ll take you far,” and then he said that the US team was strong this year, and good, very good, but that they play differently than the European teams. “A different way to approach the ball.” He hoped the very best for them, he really did (though he couldn’t get it out of his mind that attacker Landon Donovan hadn’t been picked for the team, “he’s got a beautiful game, he really does,” he said) and he hoped they’d do good, “real good” against Ghana later that night. (The US won 2-1).

He started talking about the other teams and strategies and offense lineups and specifics of statistics that were as vast and minute and perfect as a chemical equation (I’d never been mistaken as a fan of math or chemical science either) and right then you didn’t know who was driving what where and fostering any team spirit in the backseat was hard. “Goalies are the key to the game,” he said. “Gigi Buffon, Čech, Neuer. Strikers are one thing, they’re real good things, but goalkeepers are kings. The kings of the kings on the field,” he said, only he said, les rois des rois sur le terrain because all of this was still happening in French and there was velocity in what he was saying even more than there was in the way he was driving. He was definitely going “out of his way” to tell me things. There were lots of dark and difficult things about soccer, “lots,” he said. “Tu vois? You see?” The cabbie had retired from soccer a few years ago and now his kingdom reached the length of the dashboard and the ends of one-way streets with their blasts of red lights and the horns clacking like cheers bursting from fans. He was the goalkeeper of late nights, the keeper of doors and dented cars.

In 1966, England hosted the World Cup and won against West Germany in a final of 4-2 at Wembley Stadium. The match, which was the last World Cup to to be broadcast in black and white, featured the famously controversial shot from English striker Geoff Hurst (dubbed the “Wembley Goal”) that (possibly) hit into the goal of Hans Tilkowski. Vladimir Nabokov, writing about goalkeeping that same year, noted that: “I was less the keeper of a soccer goal than the keeper of a secret. As with folded arms I leant my back against the left goalpost, I enjoyed the luxury of closing my eyes, and thus I would listen to my heart knocking and feel the blind drizzle on my face and hear in the distance, the broken sounds of the game, and think of myself as of a fabulous exotic being . . . composing verse in a tongue nobody understood about a remote country nobody knew. Small wonder I was not very popular with my teammates.” 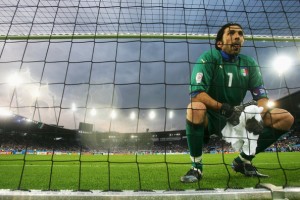 I’ve been on a soccer field a handful of times in my life and each time has been like gaining and losing perspective at the same time. A couple of times I played goalkeeper (with a record two players in the field, i.e. me and one other player) and when the ball came remotely my way, I tried to hold my ground and not let the vertigo and nerves take over that made me want to duck and run and close my eyes (not really much in the way of luxury, but definitely more by way of protection). US World Cup goalkeeper Tim Howard said, “I think goalkeeping is instinctual . . . You just have to go with your gut,” and my gut was telling me that screaming and running the other way might be safer, but that was my very limited perspective. In soccer, it’s about running towards something, not from it.

The local bar where I’ve been watching some of the games has a big pull-down screen, a couple of old couches and a great deal on draft beer during the World Cup. The last few times that they’ve shown the games, the frame of the video has been a little bit off the screen and the image has spilled out over onto the wall. I was at the bar for the last World Cup game that Italy played against Uruguay (0-1) and in the final minutes, goalkeeper Gigi Buffon ran out onto the field, maybe not so much as a fabulous exotic being emerging from a stucco wall to the edge of a video screen in a sports bar in Paris, but more as one of the members of his team, bringing his kingdom with him, and in my few years of soccer fandom and limited understanding of the game, I’d never seen that. People at the bar said, “He’s playing everything.” The goalkeeper left the door wide open.