A few months ago, an intrepid handful of early readers snuck behind the scenes for an early glimpse at Adam O’Fallon Price’s The Hotel Neversink—a dazzling and spine-tingling literary mystery following the rise and fall of a grand Catskills hotel over the course of the twentieth century. In a review in the Star Tribune, “Price takes big risks that allow him to perform dizzying feats,” and in a starred review in Booklist, “The storytelling structure that Price has constructed will leave the reader slack-jawed and eager to reread.” 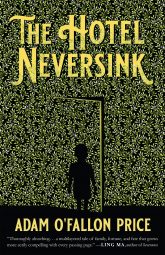 The magnificent Hotel Neversink is the crown jewel of the Catskills, a sprawling resort of unparalleled luxury that hosts athletes, actors, and even presidents. Owned and operated by the immigrant Sikorsky family, the hotel is a realization of their wildest American dream. But then a young boy disappears. This mysterious vanishing—and the ones that follow—will brand the lives of three generations. At the root of it all is Asher Sikorsky, the ambitious and ruthless patriarch whose founding of the hotel in 1931 sets a dark legacy in motion. His daughter, Jeanie Sikorsky, sees the hotel into its most lucrative era, but also its darkest. Decades later, Asher’s decendants grapple with the family’s heritage in their own ways: grandson Len fights to keep the failing hotel alive, and great-granddaughter Alice sets out to finally uncover the identity of a killer who has haunted the hotel and family for decades.

Told by an unforgettable chorus of Sikorsky family members—a matriarch, a hotel maid, a traveling comedian, the hotel detective, and many others—The Hotel Neversink is the gripping portrait of a Jewish family in the Catskills over the course of a century. With an unnerving eye and prose both comic and tragic, Adam O’Fallon Price details one man’s struggle for greatness no matter the cost, and a long-held family secret that threatens to undo it all.

In the words of J. Robert Lennon, “The Hotel Neversink is an astounding literary feat . . . packing ten novels’ worth of narrative into this compact knish of a book. I wolfed it down in a couple of bites.” Are you curious yet? Check out what our Galley Club members thought below!

Do you have a favorite line from The Hotel Neversink?

If you liked The Hotel Neversink, you’ll also like ____.

Thanks to our wonderful Galley Club members for exploring The Hotel Neversink with us. Interested in being part of Galley Club? We’ll announce the next Galley Club for Jeannie Vanasco’s gripping memoir Things We Didn’t Talk About When I Was A Girl on social media in the next few days (!) , with instructions on how to enter.