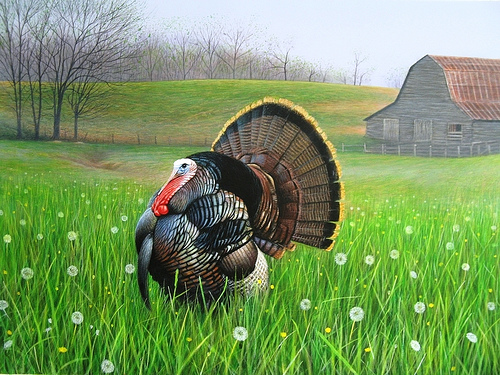 I took a more active role in procuring my Thanksgiving turkey this year than I usually do, something I maintain I had to do, because writers are supposed to say yes when given the chance to do things like harvest turkeys, because you never know what will matter later. Anyway, I wasn’t the executioner, but I was the handmaiden to the executioner, who was a molecular biologist by profession but at home a tender of turkeys, geese, ducks, and chickens. These kinds of opportunities have come up more frequently in my life in Madison than they did in New York, but I’m willing to concede that perhaps I just never made the right connections in Yonkers.

I had little firsthand experience with turkeys before this, except for the flocks that patrol the UW Arboretum and which are hulking and smoke-colored. The turkeys I saw last weekend at the molecular biologist’s house were a variety of heritage breeds, from pure Spanish white to a mahogany colored Bourbon Red to a Bronze, which looks exactly like an old painting of a turkey, with a scarlet wattle, iridescent breast and white-tipped wings. There were also geese and chickens and ducks, poking around the yard and in the henhouse. Every bird seemed vivid and surprisingly beautiful, the ducks a heathery grey, the roosters with golden heads, bright fuchsia combs and brilliant, green-black bodies. 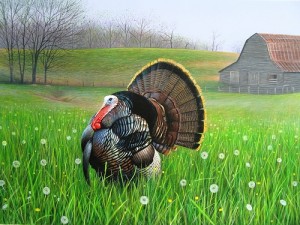 The amazing thing to me about seeing the full animal—or, the one time I visited a cadaver lab, the human body–is how densely packed we creatures are, the odd mix of tough membrane and delicate coils of intestine, the way everything nestles so tightly in the body cavity. Before I saw this kind of thing I used to imagine the inside of a body as more of a sparsely populated landscape, but it’s more like those images you see of hibernating animals curled over and on top of each other for warmth. The beauty of the inside of the animal is completely different from that of its feathers or its markings, more about the beauty of utility than vividness. The innards were a beigey clay color, with shadings of yellow, burgundy, green and brown. The nascent eggs were a cluster of translucent beads of varied size.

I enjoyed this process in the way a cook enjoys knowing exactly what the product is, or the way a curious student loves dissection, which I once did as well. While I usually try to say yes to any remotely interesting prospect that comes along like dressing turkeys or attending a three-hour church service in a religion I don’t share, I don’t know if writerly rigor would have made me say yes if I weren’t already interested. Then again, I did go to that church service, which is as rare an activity as it gets for me. And then again, the service may have been longer than three hours—that’s just when I finally snuck out. I’ll have to see if I actually follow my own rules the next time I get the chance to do something interesting that doesn’t also lead to dinner.

Michelle Wildgen is an executive editor at Tin House magazine. She is the author of the forthcoming novel Bread and Butter, the novels You’re Not You and But Not for Long, and editor of an anthology, Food & Booze: A Tin House Literary Feast. Her fiction and nonfiction have appeared in publications and anthologies including the New York Times, O, the Oprah Magazine, Best New American Voices 2004, Best Food Writing 2004 and 2009, and elsewhere.