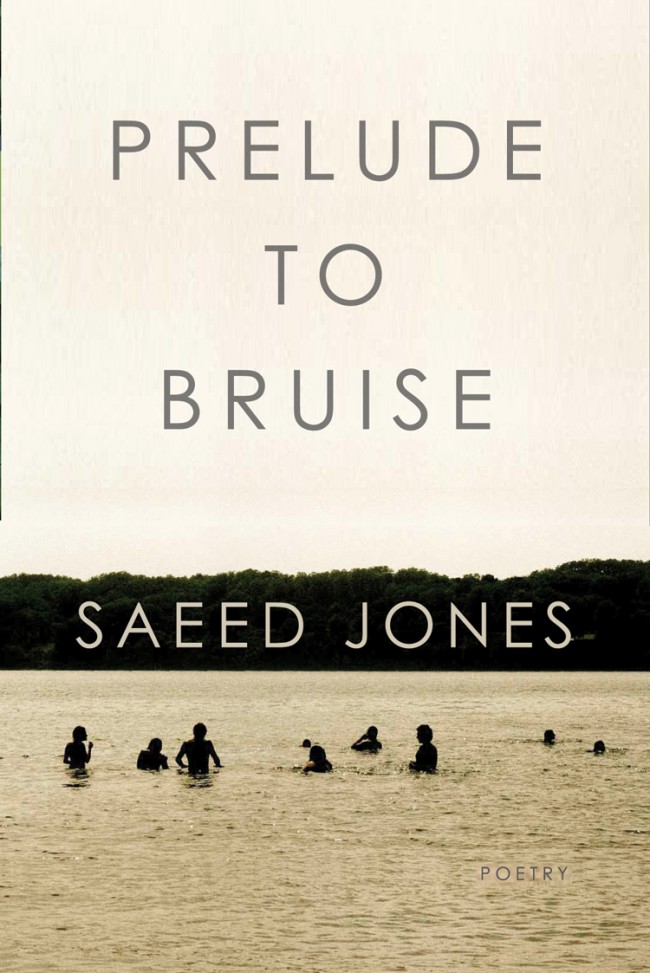 A series of brief but wide-ranging interviews with authors about ancestry.

Saeed Jones’ Prelude to Bruise is an astonishing poetry collection, furious, tender, and true. It’s a book about hatred, desire, and love, about the past and present and the blurring of the two. “Boy,” says a burly man in Birmingham, “be / a bootblack. Your back, blue black… / I like my black boys broke, or broken./ I like to break my black boys in.” The speaker of several poems, the strongest presence in the book, Boy grieves the loss of his mother, provokes his father’s violent rage by wearing a whalebone corset, and sees flashes of his father’s face in his own. “I turned the family portrait facedown/ when he was on me,” he confesses in one poem about a tryst he imagines in a clawfoot tub, and then he wakes in his room, “Father standing at the door.”

Images from these poems linger, changing shape and color over time, like a bruise. I first read the book on the subway, savoring it from from start to finish on the way to my destination, and then I read it again on the way home. Lately I keep it on the shelf above my desk while I work to show myself how much detail and feeling it’s possible to pack into five or ten words.

Maud Newton: “I’m the self-portrait of my father,” says the speaker of “Hour Between Dog & Wolf,” standing before “the only unbroken mirror, cobalt kimono/ undone.” “Even the rage is his.” In “History, According to Boy,” Boy’s father approves of him only after he does well at the shooting range, when Boy makes a “perfect little hole in the black paper body.” “It is their one good thing.” Later, Boy’s father finds a gay porn magazine and his “fist comes down like war itself.” The idea of violence as a legacy passed from father to son permeates Prelude to Bruise, not just for Boy, but for a white lover with a racist father in “Body and Kentucky Bourbon,” and for the Biblical Abraham in “Isaac, After Mount Moriah.” Can you talk about that?

Saeed Jones: One shard of inspiration for Prelude To Bruise is the fact that my father (who I haven’t seen since 1999) and I look very similar, more so as I’ve grown up. At a family reunion several years ago, I walked into my aunt’s living room and an older relative, who was sitting on the corner, looked at me and said my father’s name. For a brief moment, she actually thought I was him. It broke my heart in a quiet and permanent way. That moment definitely led to the scene in “Hour Between Dog & Wolf,” but more broadly, it got me to thinking of the various inheritances — desired and undesirable — fathers bestow on their sons. My father and I also have the same first name; I go by my middle name (Saeed) for a reason. 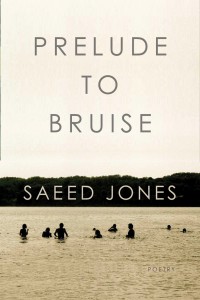 MN: In one poem, Boy wears a stolen evening gown in the cornfields, switches his hips for a “Sir who is no one, sir who is yet to come.” In another, he “dreams he has the/ body of a girl,/ a song only he can hear.” When he creates a profile to chat with boys, none are interested until he changes his profile picture to “a white boy with a similar height and build.” Then the flirtatious messages pour in. One of my (other) favorite contemporary poets, Brenda Shaughnessy, writes of your ability to take the reader “deep into lived experience, into a charged world divided among unstable yet entrenched lines: racial, gendered, political, sexual, familial.” Do you think growing up in the South, having a family from the South, gave you a different kind of awareness of the instability of these categories?

SJ: Lately, in part because of the book I’m writing now, I’ve been thinking about 1998. I was twelve years old that year; Matthew Shepard and James Byrd, Jr. were both killed that year. To learn about that kind of violence existing in the world — both racist and homophobic — it changed me. I don’t know if I fully understood it at the time, but I was terrified. And terror does many things but it also clarifies. (I’m reminded here of Claudia Rankine meeting a young man while she was in Ferguson, MO during the protests. He pointed to a picture of Michael Brown and said “I look just like him.” I know that feeling very well. I don’t wish it on anyone though I suspect far too many of us have had it.) Though I didn’t totally have the language, I was suddenly deeply aware of what it meant to be a black gay man in America, in the South, in this era. So, part of the project of Prelude To Bruise was examining all of the facets of my identity, and all of the desires and terrors that illuminate them.

MN: You’ve written about your mom’s spirituality and your grandmother’s more punishing fundamentalism (a kind I’m intimately familiar with). Do you find yourself tending toward belief or away from it? And do you often think about their approaches to religion in reckoning with your own?

SJ: I’ve practiced Nichiren buddhism, the faith my mother raised me with, for most of my life, but — I will be honest — in the last few years I’ve lapsed. I’m not sure that’s the word for it exactly. I still look to Nichiren buddhism as a life philosophy, but I haven’t been practicing very consistently for the last couple of years. When my mother passed away in 2011, chanting became very difficult. I wavered without her; I had doubts I’d never had before. And, though I’m not grief struck anymore, I’m more ambivalent. Maybe this will change; I’m not agonizing over faith or anything. My mother’s best friend, who I consider to be an aunt, continues to practice buddhism and I speak with her about it often. She listens; she doesn’t pressure or push; she is patient. Growing up, my family treated religion like taking sides in a war. It was awful and deeply hurtful. My mother was treated as an outcast from her family for most of my childhood. I never want to recreate that dynamic. 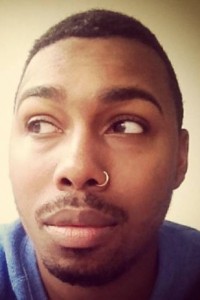 SJ: Absolutely, and especially in the last few years. I look in the mirror and see my father’s bone structure in my face. Every once and a while, I’ll laugh and hear my mother’s voice in my throat. My grandmothers are night and day, but I see flashes of myself in both of them. I’ve always been pretty independent; some family members might fairly say “distant.” And it’s true. But I do love to think about these vague, infinite inheritances I’ve taken on from my family members. It’s both interesting and comforting to know that I didn’t come from nowhere.

MN:Reflecting on one of her grandmothers, Joan Didion writes, “I was said to have her eyes, ‘Reese eyes,’ eyes that reddened and watered at the first premonition of sun or primroses or raised voices, and I was also said to have some of her ‘difference,’ her way of being less than easy at that moment when the dancing starts.” In Ancestors, William Maxwell wonders if “feelings are more a part of our physical inheritance than is commonly believed… passed on again, generation after generation, along with the color of eyes and the shape of hands and characteristic habits of mind and temperament.” What do you think about these ideas of emotional inheritance?

SJ: My mother used to cry in her sleep, not always, but often enough for me to notice. Every now and then, she’d cry out for her older brother, my uncle, in her sleep as if she were still a child, frightened by something in her dreams. I would wake her up, having her heard her from my bedroom. We never spoke about it afterwards. Well, when my mother passed away — in 2011 — I found myself crying in my sleep for the first time. And once, I startled myself away, calling out her name in my sleep. I absolutely believe in the idea of emotional inheritance; it runs throughout my work and my thinking. It’s fascinating, I think. But perhaps useless, in the end. If I have learned anything from grief, it’s that though the desire to look for meaning in all these echoes is understandable — it doesn’t make the work of living any easier.

MN: In Mary Gaitskill’s Veronica, the narrator’s mother reads her a story of a beautiful and wicked girl who feels she’s too good to visit her family and ultimately is made into a statue for a demon’s son. “Because I sat against my mother when she told this story,” says the narrator, “I did not hear it in words only. I felt it in her body. I felt a girl who wanted to be too beautiful. I felt a mother who wanted to love her. I felt a demon who wanted to torture her. I felt them mixed together so you couldn’t tell them apart.” Do you have any favorite stories, yours or anyone else’s, about the distribution of beauty in families and the divisions it can cause?

SJ: I’ve always been jealous of my parents’ looks, actually. Both of them were devastatingly beautiful. And beautiful in a way that I still don’t think I inherited. (Don’t tell the ghosts in my family what I just told you.)  After meeting my mother once, a middle school teacher said to me, the next day, “Your mother is gorgeous. What happened to you?” I wouldn’t say this is a “favorite” story but it’s one my mind likes to make its way back to. And, though I’ve never had the nerve to ask, I do wonder if beauty ever caused trouble between my parents and their siblings. There are a lot of silences in my personal history, a lot of unanswered questions. I don’t come from a family of storytellers.

MN: Are you more interested in the ancestors whose identities you know, or in those who are a mystery?

SJ: If there is a mystery in my family’s ancestry, the mystery is exactly how slavery impacts the journeys of both sides of my family. From what little research I’ve done so far, I haven’t been able to trace my family history farther back than Reconstruction so there is a sense of mystery that is heartbreaking and hurtful. I try not to think too much about it. And I’m realizing over the course of this interview that, for most of my life, I have avoiding thinking too much about ancestry. Going back too far is painful, though — of course — the present is just as fraught.

Saeed Jones is the editor of BuzzFeed LGBT and a Pushcart Prize-winning poet. His debut poetry collection Prelude to Bruise was described by Publishers Weekly as “a dark night of the soul presented as the finest of evening gowns.” NPR says his work is both “beautiful and unsparing.” His work has appeared in publications like Guernica, The Rumpus, Hayden’s Ferry Review, and Blackbird among others. Saeed is the recipient of fellowships from Cave Canem and Queer / Art / Mentors.