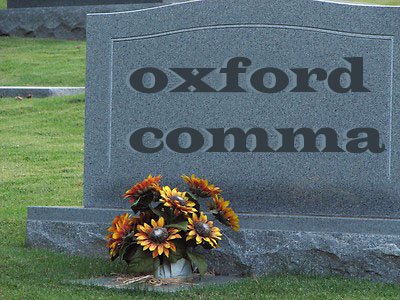 Religion. Politics. The Oxford comma. These things should not be discussed in polite company, particularly by people who have strong feelings about them — raising the topic before the eyes of the readers of Tin House is the action of a madwoman.

“There are people who embrace the Oxford comma and people who don’t,” wrote Lynne Truss in her humorous punctuation book, Eats, Shoots & Leaves, adding “and I’ll just say this: never get between these people when drink has been taken.”

The Oxford comma, the snappier moniker for the serial comma, looks just like any other comma. It falls before the final item in a list of at least three items. It is the most contentious of the commas.

“Who gives a fuck about an Oxford comma?” sings indie pop band Vampire Weekend in their hit single, “Oxford Comma.”

I give a fuck about an Oxford comma, Vampire Weekend. And so do a lot of people, discovered Jason Boog, editor of GalleyCat, a blog that focuses on the book-publishing industry, in the waning days of June 2011.

“I’m watching Twitter every day,” Boog said, “looking to see what our readers are talking about, what they’re arguing about.” One of the people Boog follows, an anonymous editor tweeting under the handle @rantyeditor, wrote, “Oxford Style Guide ditches the Oxford comma. I have strong feelings about this, none of them good.”

“I actually have strong feelings about it, too,” said Boog, who prefers to write without the Oxford comma. The tweet’s attached link took him to the style guide for the University of Oxford Public Affairs Directorate. 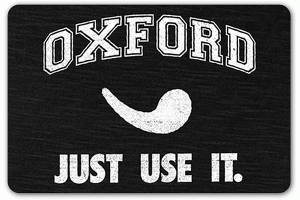 The online style guide the anonymous editor and Boog were pursuing, an official-looking Oxford page, advised its writers to leave off the penultimate comma unless it was necessary for clarity. Neither of the two editors realized that this style guide was not the revered Oxford Style Guide maintained by the prestigious Oxford University Press (OUP), but rather the style guide for the Public Affairs Directorate — a PR department.

“I thought it was funny,” Boog said. “I thought it would be this funny little blurb to throw up in the summer.” He shot out the word “funny” in seeming self-disgust, as though a person with the temerity to be flippant about punctuation must be evil to his core. His funny little blurb blasted across the Internet in minutes; echoes from its blast sound years later in online conversations about the serial comma, linked by people who apparently fail to notice either the publication date or the update at the end of the post.

“When I first wrote that post,” Boog told me the next month, “I didn’t realize – and I don’t think many people do realize – that the Oxford comma is actually tied to Oxford University Press. It’s actually something that goes back in history.”

In fact, OUP has loyally championed the serial comma for the last hundred years. “For a century it has been part of Oxford University Press style to retain or impose this last comma consistently,” explains the Oxford Dictionaries, “to the extent that the convention has also come to be called the Oxford comma.”

Although many language organizations favor the Oxford comma, there are others like the University of Oxford Public Affairs Directorate generally ruling against it. The Associated Press (AP) Stylebook, a sort of holy reference book for American journalists, prefers to drop the Oxford comma – except when needed for clarity.

In some instances, the absence of the Oxford comma creates ambiguity, like this sentence describing my bedroom: On my walls hang pictures of my friends, Batman and Elvis Presley.

The Oxford comma may be extraneous in some cases, but it is rare that addition of this final listing comma ever causes confusion. It quietly says, “By the way, this is a list, not a clarifying clause.” It dusts off the pause between the penultimate and final item in the list. It doesn’t shriek, it doesn’t show off, and you don’t have to lock it in the basement when there’s company over. It isn’t elegant or pretentious: it is well-behaved and humble. When reading, you don’t even notice the Oxford comma until it isn’t there and you’re thinking, “It is so sad that she thinks she is friends with Batman and Elvis Presley.” 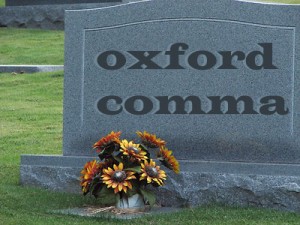 “My own feeling,” Truss wrote, grasping for a neutral option, “is that one shouldn’t be too rigid about the Oxford comma.”

Hmph! And she calls herself a punctuation vigilante.

“It seems to me it’s never wrong to use it all the time,” said Bergmann, taking a stronger stance than grammar humorist Truss, “but it’s wrong to leave it out when you need it.”

Punctuation is not simple stuff; it is complex! Why else do style guides proliferate like bunnies? Why else do writers and editors get into blazing rows over commas?

Because punctuation is an art.

“A few people who are real geniuses can improvise without learning anything,” Bergmann said, “but few of us are geniuses.”

The ultimate purpose of punctuation is to aid grammatical clarity. It is the writer’s way of telling the reader, “This is what I mean.” When done masterfully, the reader never even notices punctuation.

It is difficult to see what is unclear in your own writing. You know what you meant, so you read it as you meant it, not how another person would see it. It can be difficult to identify situations when the sentence is not clear without an Oxford comma.

Maybe that’s why people got so worked up about the idea that Oxford had dropped its namesake comma. Maybe imagining reading unclear prose by writers who are no Picasso with a comma haunts other minds than mine. At least other people give a fuck about the Oxford comma.

“Are you tired of talking about this?” I asked Boog back in July of 2011. He’d written a gracious, respectful correction the day after his erroneous first post that June, and here I was asking him about that damn comma a month later. As we reached the end of the conversation — which did not involve a bar fight over the Oxford comma, despite our differences of opinion — I realized here was another soul with strong feelings about punctuation and clarity.

“I’ll talk about it as long as people want to talk about it,” Boog said earnestly. “I’m glad the debate happened. It illustrates how healthy books, reading, and writing are right now. I think that’s a promising sign for literary people everywhere.”

It’s true that people on either side of the Internet battlefield over the Oxford comma had a surprising variety of well-considered defenses, chiming in to show they care about clarity of communication. With the upheaval surrounding the publishing industry, the big argument over the little comma indicates maybe, just maybe, civilization is not going to hell. Yet.

Callie Leuck is a writer, dancer, tea-drinker, amateur photographer, and Oxford comma enthusiast. She is a recent science-medical writing graduate of the Johns Hopkins University. Her current city of residence is Indianapolis, IN.