In an age of smart phones and cloud storage, few things seem more primitive than a manila folder with a slice of white paper in it, but that’s what I use to keep track of the essays I submit to literary magazines. My system is simple: one folder for each essay I’m submitting, and one sheet of unlined printer paper to write down where and when I sent the piece. Writers with a deeper love of graphs and charts might use an Excel spreadsheet to record this information, but the cave man in me prefers minimalist hard copy.

This is what poets, fiction writers and essayists do. We “submit.” Literary magazines are our primary outlets, and unlike glossy magazines and newspapers, most lit mags don’t accept pitches, only finished pieces. So you write your prose or poetry, and you send it to publications like Alaska Quarterly Review and The Pinch. You wait a few months for them to decline or agree to publish it, and in the meantime, you send the same piece to other magazines.

Who has what when is a lot to remember. Between work deadlines, bus schedules, and too many user names and passwords, we already have enough to remember, so here’s what I do: I write the essay’s title on the top of the printer paper and underline it. Then I write numbers down the page’s left side. Beside each number, I write the name of the literary magazine, and the date I submitted to it. When that magazine rejects my essay, I pull the appropriate folder from my file cabinet, and I put a checkmark through the number and write “rejected” beside the date. This way the entire correspondence is recorded. Sometimes the numbers run as high as forty before a magazine takes a piece. Sometimes a piece earns so many rejections that I run out of room, and instead of adding a second sheet of paper, I ditch the vertical layout and continue my list in the margins. Other times I’m forced to abandon a folder in my file cabinet, where the list of magazines serve as a monument to Beckett’s words, “Ever tried. Ever failed. No matter.  Try again.” 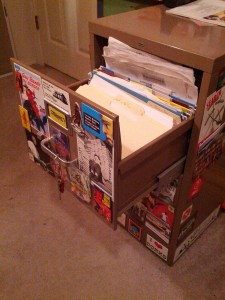 Most writers probably have their own unique method, or “odd method” depending on your perspective. For whatever reason, this austere paper system works better for me than others, which says more about how my mind works than it does about Excel spreadsheets. Maybe I’m projecting, but no matter your system, if you’re a submitter, two things are essential: order and efficiency.

For instance, dates matter. If too much time passes without word from a magazine, you’ll eventually want to contact them to inquire about its status. Your submission might have fallen behind a file cabinet, as one of my once did. Or maybe the rejection letter got lost. When you contact the magazine, they’ll probably ask when you sent it: January? March? And what’s the piece’s title? An accurate record will let you answer those questions. It will also help you keep straight which version of each piece you sent. Was it the older, longer version, or the newer shorter one? And which title did you use for that magazine, the first one you thought was perfect after you’d had a few beers? Or the concise thematic one you thought up weeks later? I know some writers who have as many versions of a story under consideration as magazines considering it – five or six or ten different versions. A log will keep that straight.

I’m not anal retentive – dirty socks pile up in one corner of my room, the trash can fills – but I am organized. Books go on shelves. Mugs get stacked in cabinets. For my personal life and writing to work, I need some degree of order, because when things are easy to find and access, I’m more proficient—submissions here, pay stubs there, a stack of yellow stickies. Not every writer is like this, and I’m the last person to tell people what to do, but I have trouble imagining working under too chaotic of conditions. What if you need to withdraw something from consideration? To help a magazine find your withdrawn story in their queue/pile, you can check your log and tell them, “I sent that piece on December 16th.” Same with subsequent submissions: What if you can’t remember what you sent? You don’t want to submit an essay to a magazine that already rejected it, or worse, send them something else when they already have a piece of yours under consideration. It only takes a few seconds to write that stuff down. Art might not be lucrative like running your own restaurant or day-trading, but I find that my mind is freer to roam and be creative when other parts of my life are structured, and that freedom comes from running certain aspects of writing like a business.

I’m tempted to say, “Yeah, monkey business,” but I don’t want to diminish the role of organization in my life, even though so much of writing is monkey business. Accepting contributor copies as payment for something that took six to twelve months to write; subsisting off microwavable Trader Joes food in order to keep your expenses low enough that you can afford time to write; working temp and odd jobs while publishing in magazines that writers respect but non-writers have never heard of – that’s monkey business. To have an adult’s business mindset and the flophouse budget lifestyle of a twenty year old musician seem antithetical, but I think of those things as part of the business of writing: few poets or essayists make enough money to support themselves by writing, but if you’re willing to live frugally and without popular recognition, you can enjoy a gratifying creative freedom by writing for literary magazines. This is one lesson of my submission tracking system: meager material existence = write what you like. Another lesson it taught me is that being efficient and professional doesn’t inhibit creativity. Managing my records and thinking in terms of “managing” and “records” haven’t snuffed the dreamy, imaginative qualities in me. I still feel enchanted by reading and by the writing process, even though I’m hardcore about what a floor manager might call my “day-to-day operations.” This isn’t to say I could run my own café or retail business. They would fail. But I can manage my Lit Biz like a champ.

It took years of tracking subs for me to realize that part of the charm of my paper system is the handwriting. I like the look of it. Not because it’s pretty – it’s barely legible – and not because it’s mine, but because it’s human. When you’re receiving form letter rejections addressed to “Dear Writer” and signed by “The Editors,” it’s nice to see the intimacy and warmth of handwritten text, something personal, even when it’s you writing to yourself. 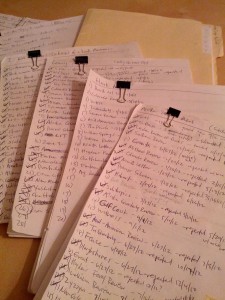 I’ll admit, mine is an antiquated system, but not because it involves paper. It’s because of the particular age of the paper. When I first started submitting to literary magazines, I worked at Powell’s Books, and I used their machines to print copies of each magazine’s submission guidelines. I have one for each publication I submit to: a printout of Mid-American Review’s guidelines, a printout of the Southern Review’s guidelines, and so on. The original idea was to have each mag’s directions accessible when I was preparing the documents – this journal likes paper clips not staples, that one likes larger margins, address goes in the left corner for them, not the right. What I ended up with was a backup log. In addition to the cover page, I write the name and date of each essay submitted on each magazine’s printed guidelines, then I paper clip that to the cover page. That way, if I lose or screw up information on the cover sheet, I can always look on each magazine printout and see what I sent them. That’s really why my tracking system is antiquated: because many of the papers I use are over six years old. They’re tattered. They’re tea-stained. They’re dog-eared and yellow and have lived in three states. I’m much older, too, and the age gap adds significance to the printouts.

The thirty year old me who printed those sheets at Powell’s was an excited, naïve, driven aspirant who was trying to figure out how to write the sort of nonfiction that he liked to read. The current thirty-seven year old me is an excited, thick-skinned working aspirant with a better understanding of what he’s doing and a lot he’s still trying to learn. I’m not as able or versatile as I’d like to be, but I’m no longer the greenhorn I was when I first started tracking submissions on pages I printed at work. I like that. It has a narrative circularity and metaphoric weight that appeals to the reader in me, and those are the kind of components that I try to include in the essays I write. That’s something that hasn’t changed through the years: my need to reflect, to find meaning and symbolism below the surface of things. Also, it’s nice to have a story when I’m looking at all those ratty printouts: “How cool,” I think, “I’ve been using this paper since 2005.” Most of those pages are running out of room, though. We’ll see how much longer they last.