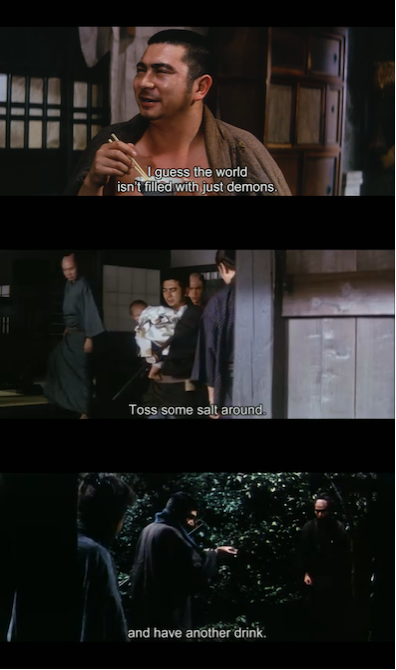 Poet Adam Soldofsky is the mind behind The Blind Swordsman Poems, his inspired series of poems composed of screenshots from Japan’s cultic Zatoichi films. Via word and image, Soldofsky craft poems that are part charming, quizzical, Zen koan, part pop culture haiku. Each finds the song in the film’s subtitles and the slant connections between its frames. We talked to him about his project, Zaitoichi, and language in translation.

Emma Komlos-Hrobsky: For the uninitiated, can you describe what we’re seeing and reading in each of these poems?

Adam Soldofsky: I suppose what you’re looking at is a sort of double haiku – one consisting of texts and one of images. Hopefully it is even a triple haiku if you are attempting a real-time synthesis of image and text. This third approach is my favorite because it is so simultaneous and self-defeating as to thwart a final reading, and for me at least, to invite a return of the eye to the poems.

EKH: What led you to this project? Did it exist in some other form before its present shape as a tumblr? And how long have you been working on it?

AS: This project is just a fantasy of mine, basically, realized via the relative user-friendliness of our new technology. There is this phenomenon that I’m sure others have experienced watching a movie with subtitles, where the text appears on screen before the actor has spoken, or even better, lingers after the voice has decayed. In these moments there is a strange over-emphasis on the text hovering before you, where you evaluate the language beyond its context, without leaving the context altogether. The images on screen become a tableau that maintains the logic of the story, its universe of environments, characters and tropes, but abstracted somehow. And over this a text appears, in defiance and/or in concordance with the scene, but also completely independent of it. For whatever reason this is rapturous to me! 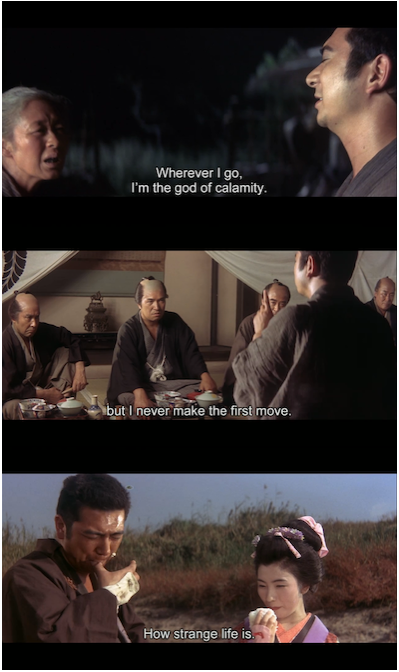 I automatically begin to imagine joining all these moments in some sequence. The Zatoichi series has a superabundance of these moments. All that was left to do was watch the movies again on my wife’s computer. The assemblage did not take very long at all once I had a good stock of the screen-shots.

EKH: I like your figuration of the rapturous qualities of the text/image disconnect, and am in total agreement with you about it. Was there a particular such instance that generated the idea for this project, a fragment of text that had this quality that you wanted to work with? For a long time, I wrote found poems using Billy Bob Thornton quotes, and I remember the impetus came from a specific line of his about komodo dragons that seemed too good to let go, and even better out of context.

AS: I wish I had the idea to use Billy Bob Thornton as a source for poems! You could probably write Billy Bob poems for the rest of your life and not tap the full poetic potential there!! Anyway, maybe there was a particular generative fragment of text in the Zatoichi films from which the poems sprang, but I can’t remember. I wish I could remember the first instance of this phenomenon in general, because it might mark the conversion in my feelings about what “poetry” is and what a “poem” looks like. I used to be rather conservative about what qualified as a poem / as poetry. If I knew for certain the day this changed, the specific piece of text by which my reactionary feelings about poetry were compromised, I would mark it on my calendar and pay a solemn yearly homage, because life has surely improved since then.

EKH: Why Zatoichi? What’s your relationship with the blind swordsman outside of this project? For me, there’s a particular valor and pathos to the story of Zatoichi that makes him a poetic sort of soul, but I wonder what it is that appeals about him or the films to you?

AS: Well of course I love the movies. I watched them long before conceiving of this project, some of them multiple times.  It’s funny but I just like to have one on in the background sometimes! There are 25 of them, but the formula is very consistent so that they are all almost the same film. I agree that the blind swordsman is naturally a poetic character, even a Greek-like compact symbol of valor and pathos, but I suppose the reason I used this series has more to do with the fact that its repertoire of style and tropes is so strange and so firmly established. I like to write using appropriation and restrictive forms, but only if the source and the restrictions amount to a complete little universe.

EKH: Are there themes you see emerging in the poems, things the films seem to want you to talk about? And are they the same themes of the films themselves?

AS: The movies certainly do have some major reoccurring themes, but I don’t think they are necessarily constituted in the poems. Ichi is more than anything a person living in open contradiction. He’s a killer and a gangster, but he is also a moralist, pious and sentimental about legitimate society. He is a virtuoso and a cripple. He is a hero and fool simultaneously. And he is aware of all this. The result is that almost everything he says is wonderful in one way or another. I honestly don’t know what the themes are in the poems, but I think their engine is something like these irresolvable contradictions.

EKH: And what have you noticed about the language of the film via the subtitles? Do you think the poems would be completely different in the original Japanese?

AS: I’ve always thought the writing in the films was fabulous, but of course, I’m going by the translation. I’m sure the poems would be entirely different in Japanese. Anyway, I don’t think it would be possible to do something like this with a film in a language I understand. Part of the effect I described earlier must depend on the voice of the actor being incomprehensible, so that when the text appears on the screen it is completely fresh, so that it delivers its blow, forgive me, before you have seen the stroke.

Adam Soldofsky was born in Oakland, California and raised in the Silicon Valley. His writing has recently appeared in Bodega, Paperbag Journal, Clementine, Gigantic Sequins, No, Dear, and Leveler. He lives in New York City.

Dryland: An Interview with Sara Jaffe