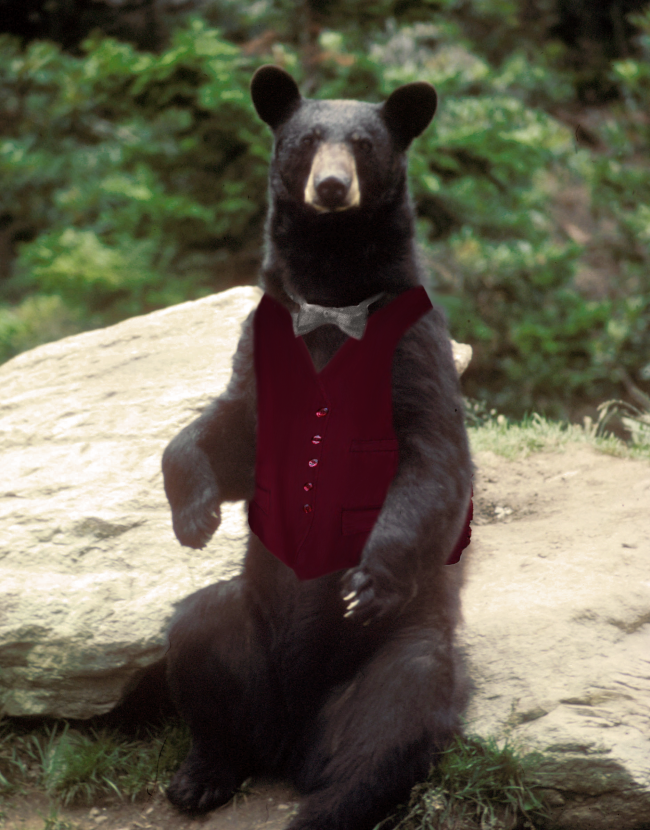 Anyone interested in creative writing has probably already heard the phrase, “the bear at the front door.” But if you’ve never had the chance to take a college creative writing class or else simply can’t remember anything that was said in the college creative writing class you did take because you were too busy evaluating your instructor sexually, then you might be wondering what this phrase means exactly. I fall into the first category, since I spent my time in college studying a real subject (American Cultural Studies with a minor in Falling Asleep with the Television On). So while I have heard the phrase “bear at the front door” mentioned by my writer friends, I have little to no idea what it means. When, as frequently happens, the subject comes up at a party, I just nod aggressively while filling my mouth with handful after handful of crudités.

I suppose I could figure it out by picking up a book on the craft of fiction, but reading a creative writing guide feels like one step closer to reading a self-help book, which in turn would be one step closer to addressing my crushing addiction to collecting steampunk beanie babies, a can of worms I’d rather not open at the moment (especially since I finally have my storage unit filled with doll-sized aviator goggles the way I like it). Instead, I have decided to complete my knowledge on this bit of creative writing arcana using the same tool with which I have filled in the many other gaps in my education: broad, sweeping assumptions.

When discussing this subject, my writer friends often seem to be talking about the various ways to write the opening of a story. So let’s assume that a maxim among those who have studied the art of creative writing at the college level is that it is ideal for works of fiction to begin with bears at front doors. Of course, the only way to test this theory is to put it into practice.

Henry and Alice stood by their front door. There was nothing at it and nothing happened. Henry looked like he was about to say something, but then he didn’t.

Henry and Alice stood near their front door. Suddenly they saw through the window that there was a bear at it. They opened the door and stepped out onto the porch, where the ferocious beast gave them both a meaningful look.

Henry and Alice and the bear all hugged each other and wept.

Even I was skeptical at first, but clearly the story that begins with a bear at the front door is far more interesting. We can therefore state definitively that we have unlocked the meaning of this phrase. Though, it does seem silly to suggest that every work of fiction should literally begin with a bear at a front door. So, for our purposes, let’s amend this craft tip so that there just needs to be a bear mentioned somewhere in the first paragraph.

That in itself seems like easy enough advice to follow. And yet, even some truly great writers have allowed their work to suffer by failing to include even a passing reference to a bear. Just look at the openings of these famous novels before and after I fixed them:

One Hundred Years of Solitude

BEFORE: Many years later, as he faced the firing squad, Colonel Aureliano Buendía was to remember that distant afternoon when his father took him to discover ice.

AFTER: Many years later, as he faced the firing squad, Colonel Aureliano Buendía was to remember that distant afternoon when his father took him to discover a tribe of ice-skating bears.

Catcher In The Rye

BEFORE: If you really want to hear about it, the first thing you’ll probably want to know is where I was born, and what my lousy childhood was like, and how my parents were occupied and all before they had me, and all that David Copperfield kind of crap, but I don’t feel like going into it, if you want to know the truth.

AFTER: If you really want to hear about it, the first thing you’ll probably want to know about is how a Kodiak bear stole my duffel bag filled with fencing foils, probably because he was a phoney.

BEFORE:  Mrs. Dalloway said she would buy the flowers herself.

AFTER: Mrs. Dalloway said she would load the bear catapult herself.

Granted, each of these books has managed to achieve a modicum of success. But one wonders how much more successful they would have been had they followed this simple, sure-fire craft advice.

So for those of you who, like me, are now ready to start incorporating bears into your fiction, it is important to familiarize yourself with some basic bear facts. Here are three just off the top of my head:

And as long as we’re getting into specifics, I should point out that koala bears are not really bears and therefore should not be included in your fiction. Actual bears are ideal for stories because they can carry out incredible acts of violence while also, when getting their heads stuck in jars or stealing old sandwiches from a dumpster, evoking a surprising amount of pathos. Whereas most koala bears don’t do anything except stuff their mouths with leaves, which, if the koala’s demeanor is any indication, must be laced with some kind of horse barbiturate. No matter how hard you pound on the protective glass at the zoo or how much of a commotion it makes when everyone around you starts shushing you and pulling you away from the exhibit, a koala will just sit there like a lump staring out at you with its beady, expressionless eyes.

That warning aside, you should still feel free to think outside the box, as I’m sure there are many ways to improve on this advice. For example, a belligerent grizzly bear at the front door is scary, but in a many ways a belligerent man in a grizzly bear costume is even scarier. Because while a real bear is by all means a terrifying beast, a man who has made a conscious decision to bother you while wearing a bear costume is weird and can work doorknobs.

Working in an even more experimental vein, Margaret Atwood opened her award-winning novel The Handmaid’s Tale with a scene in which an ostrich wearing a cowboy hat kick-murders a saloon full of people. This was a controversial choice on her part, since it will be clear to even the most casual observer that ostriches aren’t bears. But by choosing an animal that is so obviously not a bear, Atwood is masterfully and subtly referencing the abstract concept of bears so that ultimately the scene still works.

And while I am sure many of you are saying to yourself that you don’t really need to include any bears in your fiction, I would like to point out that you also don’t really need to wear underwear or chew with your mouth closed or be nice to your spouse, but I think you’ll be happy with the results if you do. After all, Mother Nature has provided fiction writers with a perfect and renewable (bear sex) resource. When you reflect on nature’s many blunders, like armadillos or the Florida peninsula, it makes the miracle of bears all the more remarkable. So why not include them in your work? It goes without saying that I can’t force you to write anything you don’t want to. But I strongly urge you to consider it. Because if you think that the story you’re working on now — the one where the narrator who is roughly your age and shares your exact same personality is experiencing ambivalence about his or her most recent relationship — can’t be improved by one or all of the characters accidentally being killed by a circus bear’s playful paw strike to the windpipe, you’re wrong.

Seth Fried’s short stories have appeared in numerous publications, including Tin House, One Story, McSweeney’s Quarterly Concern, The Kenyon Review, The Missouri Review, and Vice, and have been anthologized in The Better of McSweeney’s, Volume 2 and The Pushcart Prize XXXV: The Best of the Small Presses. His debut short story collection, The Great Frustration, was published by Soft Skull Press.
gggg
Images created by Julia Mehoke.