Just four words, but then the “he” in question, Walter Morel, possesses few words with which to express the strong emotions roiling in his head.

Mr. Morel is a rough-mannered, uneducated miner stuck in a difficult marriage with a woman, Gertrude, who dreams of leading a more refined life. Only a page before “He loathed a fork,” Lawrence describes the romantically minded Mrs. Morel in lush, lyrical paragraphs that are typical of what we think of as high D. H. Lawrence style, filled with flowery, languorous prose that borders on purple. A sample: “Her self melted out like scent into the shiny, pale air. After a time, the child too melted with her in the mixing-pot of moonlight, and she rested with the hills and lilies and houses, all swum together in a kind of swoon.” 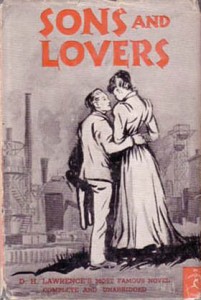 However, when Lawrence shifts his camera lens to a scene showing Gertrude’s husband Walter waking up and making himself breakfast, the author’s language becomes clipped and coarse: “He toasted his bacon on a fork and caught the drops of fat on his bread. Then he put the rasher on his thick slice of bread, and cut off chunks with a clasp knife, poured his tea into his saucer, and was happy. With his family about, meals were never so pleasant. He loathed a fork.”

The verb “loathe” is a particularly strong one to aim at such an innocent material object like a fork, especially in comparison with other options like “dislike” or “wasn’t used to” or even “hate.” “Loathe” connotes a reaction evoking fear, nausea, even hostility. (In fact, its root is the Old English word “lath” meaning “hostile.”)

So forks provoke Mr. Morel’s hostility, even enmity. Why? Because these objects represent a world that’s both inaccessible and undesirable to him. Walter Morel wants to live simply, to eat with a knife or his hands.  And yet the forks in his kitchen remind him that “modern” people, as Lawrence calls them, are supposed to eat in a more decorous, civilized manner. This all seems like a load of hooey to Mr. Morel.

Here lies his fatal mistake, the one that leads to his failure as a husband and father. Walter Morel might do well to listen to Shakespeare, speaking through King Lear:  “Reason not the need.” Again and again in Sons and Lovers, Mr. Morel’s inability to understand the value of aesthetic pleasures creates a permanent gulf between himself and the people who prefer to eat with forks. Unfortunately for Walter Morel, his wife and children happen to be on the opposite side of that particular divide.

Aaron Hamburger was awarded the Rome Prize by the American Academy of Arts and Letters and the American Academy in Rome for his short story collection The View from Stalin’s Head. His next book, Faith for Beginners, was was nominated for a Lambda Literary Award. His writing has appeared in The Village Voice, Tin House, Poets and Writers, Nerve, Out,Details, and Time Out New York.

The Art of the Sentence: Zora Neale Hurston