“It’s over me like a ton of water, the things I don’t know.”
—Gina Berriault, “Around the Dear Ruin” 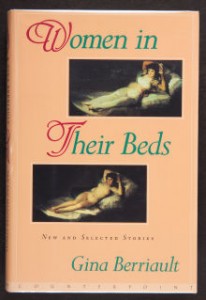 This is the final line spoken by a character in Gina Berriault’s short story, “Around The Dear Ruin” from her marvelous collection, Women in Their Beds. This one bit of dialog has stayed with me since I first read the story in 1996 because it not only sums up the ongoing dilemma of the character speaking, but taps into a larger, more expansive sense that almost all of us have (or have had) at one time or another in our lives. It is a sentiment that transcends the story, which is a kind of love story/art story that is all about misplaced desire and misunderstood love. By the time the character, a baffled, good-hearted merchant marine utters these words he realizes the only thing he understands (has ever understood) is that he understands nothing. Berriault lifts his confusion into tragedy.

The image of water is poetic, as is the idea of a “ton” of water; it is one of a deluge, of being swept away or caught up in the power of something you can in no way fight or control. Additionally, a rush of water implies movement, unlike dirt which is a static, burial image. Had Berriault used earth as an image, the sentence (the sentiment) would lose all it’s power.

Whitney Otto is the bestselling author of How to Make an American Quilt (which was made into a feature film), Now You See Her, and The Passion Dream Book. A native of California, she lives with her husband and son in Portland, Oregon.

The Art of the Sentence: Denis Johnson