“I was going nowhere after I stopped them, just down the hall toward the bathroom, just stuck almost at the end of the top of our house so that of course I didn’t want to stay there where I had no business being or intention, where I felt stupid and strange almost in the bedroom.”—Diane Williams, “Dropping The Masters“

There’s a sentence that bedevils me every time I come across it. It tangles and doubles back right in the middle of Diane Williams’s excellent story “Dropping the Masters.” The story is short; the sentence is not. The sentence makes up about 1/6 of the story’s length. Here’s what’s happening: two boys are in their room, clatting Masters of the Universe action figures together, making them have sex (“they could rock a pair and make those Masters copulate just as long as they wanted them to”). Meanwhile, their mother, walking down the hallway, hears and glimpses them, and is caught there, fascinated. When they look up and see her, they stop; as she keeps walking, they begin again. And then we get this: 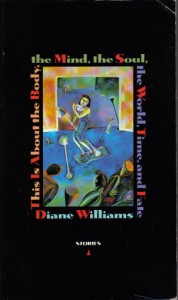 “I was going nowhere”—we start with this ragged contradiction, then slip into undercutting phrase after undercutting phrase (“/just/ down the hall … /just/ stuck almost at the end of our house…where I felt stupid and strange, /almost /in the bathroom.”). And then the mild, revealing protestation:“/of course/ I didn’t want to stay there.” Here we have external movement and internal movement at once; the emotional quandary of the situation—what are her boys doing? Should they be stopped? Why is she so shut out?—is perfectly caught up in her physical stasis, there in the hallway. Is there a kind of pleasure in this tension?

Meanwhile, the language continues to knot and riff and fret, trying to account for the fact that she can get no closer to her boys, can go no further away from them. She’s absolving herself of responsibility, in a way. And the recollection, this telling in the past tense, seems engaged to bring a kind of sense, once things have settled, but the language of the telling betrays itself and lets the emotions in again. The re-telling only causes the emotions to return, the wonder to intensify.

I believe that the purpose of storytelling is to convey emotion, and this sentence perfectly matches its diction and syntax to the matter at hand. In fact, it’s not so much a representation or demonstration of an emotional state, but a true re-visiting, a performance of it.

Peter Rock is the author of five novels, most recently My Abandonment, and a story collection, The Unsettling. He teaches at Reed College and lives with his wife and two fierce young daughters in Portland, Oregon. An excerpt from his forthcoming novel, The Raccoon and the Letter, can be found in the current issue of Tin House.