“Ah bet he’s wore out half a dozen Adam’s apples since Spunk’s been on the job with Lena.”

Joe Kanty’s Adam’s apple is the focus of a lot of attention in the opening pages of “Spunk,” an early story by Zora Neale Hurston. A couple pages before this sentence, Hurston’s narrator describes Joe’s Adam’s apple as “twitching nervously up and down his throat,” a somewhat canned bit of naturalistic detail, closely observed but not mindblowing. Joe’s overactive larynx is meant to evoke his fear of Spunk Banks, the gun-toting behemoth who has stolen his wife, Lena. Spunk, for his part, never swallows hard, fearless romantic that he is, which is probably why Lena digs him so. 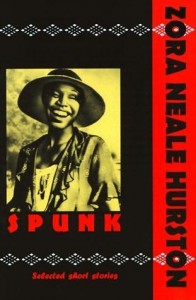 Aside from the typical acoustical pleasures of Hurstonian dialogue (and that somehow-even-cruder-than-saying-“fucking” euphemism, “on the job”), what I love about this sentence, delivered by the village gossip Elijah, and tossed off after a long comma-cluttered run-on in which he tells the story of Joe’s tense run-in with Spunk and Lena the week before, is also what I hate about it: the delight it takes in Joe’s suffering. It is shamefully hyperbolic, and that none of the other men gathered at the store that day point out its underlying cruelty, or question its absurdity, somehow helps cram me in that doorway of the store right there with them, waiting a bit too gleefully for Spunk’s gun to go off in the woods.

Everything about it makes me believe the line issued fully formed from the writer’s unconscious, even if that most probably wasn’t the case. There’s something so perfect and unforgettable about wearing out an Adam’s apple with anxious swallowing: I always wind up imagining Joe alone each night in his bedroom after a long day of angsty gulping, his worn-out Adam’s apple having detached itself and sunk to his collar bone, so that he must reach his whole forearm down his mouth to retrieve it, extracting it, looking at it self-pityingly for a while in the lantern light, noticing how it resembles the inside of an unraveled baseball—black, rough, hard little rubber (like Lena’s heart)—before he tosses it in the trash, reaching for a fresh one the next morning, a gleaming white marble that’s been soaking in a glass on his nightstand, like dentures.

“Spunk” is clearly a remix of Gogol’s “The Overcoat,” though you might say, “What modern short story isn’t?” But, no, this one really is: like Akaky Akakievich, Joe reappears in the second half as an angry specter, haunting Spunk. One body is not enough to contain Joe’s hurt. He needs at least two lives and six Adam’s apples. Which brings up the real reason I love the sentence: like the rest of the story, not only is it a dance between the modern and the folk, between naturalistic detail and tale telling, between the way people write and the way people talk, but it also turns that dance into something greater than itself, a lindy hop between the comic and cosmic.