“And so, on those darkening afternoons, at those scenes whose scenery seemed more often pointed at than observed, whenever the camera in my hand put me in mind of some young woman who might see me years afterwards as a man who saw further than others, I would always ask my patron at last to record the moment when I lifted my own camera to my face and stood with my eye pressed against the lens and my finger poised as if to expose to the film in its dark chamber the darkness that was the only visible sign of whatever I saw beyond myself.”— Gerald Murnane, “The Plains” 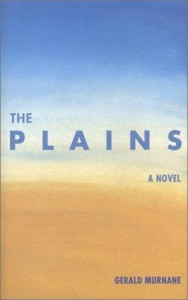 I want a sentence to be something I’ve never read before, like Call me Ismael. I google sentences I write, just to make sure. And I love the long, rhapsodic sentences like Murnane’s sentence that have other points of view folded into them and feel as though their mission has as much to do with something you can touch and see ephemerally as well as in some more tactile way — sentences, like some poems I know, that try to get the whole experience of being alive in them. The interiority of this sentence beautifully matches the exterior expanse or scenery that he sets down in front of him and that brief snapshot of a woman who exists in the future fosters a kind of sensibility that the rest of the sentence is built on — how one can or cannot see the world beyond oneself and how one records it. Of course, for me, the real wonder of this sentence is that it attempts to describe how one represents being as the moment (if one reads record as photographs) when someone takes a picture of someone taking a picture — which as it happens, is a sentence I’ve never read.

Michael Klein’s new book of poems, then, we were still living, is a 2011 Lambda Literary Award Finalist for poetry. His first book of poems, 1999, tied with James Schuyler to win the award in 1993. His other books are prose: Track Conditions; a memoir, and The End of Being Known. He teaches in the MFA program at Goddard College in Port Townsend, WA, and is a summer faculty member at the Fine Arts Work Center in Provincetown. His work can be found in the latest issue of Tin House.