“But nobody did come, because nobody does; and under the crushing recognition of his gigantic error Jude continued to wish himself out of the world.”

Victorian novelists almost always kept the hem of a coattail or tip of a walking-stick visible in the shadowy wings of their narratives. Often they strode fully onstage. Here Hardy darts past with a ballsy but sly rhetorical flourish: “because nobody does.” Reading today, the move strikes me as ultra modern, which may just mean it’s so old-fashioned, so basic, that it now seems wildly original. In our contemporary works of realism we generally forbid this kind of thing. 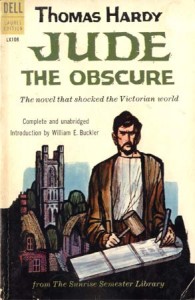 It will, on a good editor’s first pass of a manuscript, make for easy prey (e.g. “Who’s talking here?”). I, for one, thrill to the sentence’s ambition, its wish to ensphere (Hardy’s word) the character of Jude Fawley early on, to make him large and representative, to give him the dimension of his place within the doomed race of man, to backlight him and stretch his shadow forward across the great works of literature to come. It doesn’t really matter that it’s the author interjecting. This is not about Thomas Hardy. What matters is the heart-stopping effect that Hardy so beautifully—and, to our eyes, riskily—achieves.

M. Allen Cunningham is the author The Green Age of Asher Witherow and Lost Son, which is based on the life and work of Rilke. His essay on Paul Zweig’s Departures can be found in the current issue of Tin House.