“Human brains are blown in by the winds from someplace around the Caspian Sea.”

-Nikolai Gogol, “Diary of a Madman”

Here is the slightly fuller context in which this extracted sentence appears:  “Now I believe all troubles stem from the misconception that human brains are located in the head.  They are not:  human brains are blown in by the winds from someplace around the Caspian Sea.” 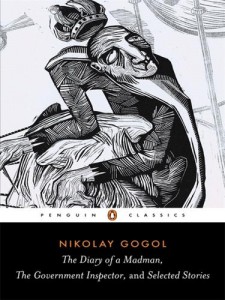 First, it’s translation, by some guy in some year in some place.  When I read in translation I like to give in and appreciate the sound, or taste, or whatever it is of translation itself—all translated works feel to me like they have a tinge of translation that is only honest, an element of stiffness, or earnestness, that gives every translated work I’ve read something in common across place and time.  That’s layered along with the sound of the particular work, and I love the impossibility of pinning down exactly where the whole of what I receive comes from, including aspects from the sensibility of the time and place from which it originated, the language in which it was written, the voice of Mr. Gogol, the character himself, and the particular translator and his sensibility.  But more directly, in the context of the story it’s a suddenly musical line and stands out in a way that could have emerged accidentally at any moment in the history of the creation of the text, or as an intentional deviation from the dominant tone of the story.  Either way, it feels “blown in.”  It’s just plain beautiful, and then so funny, too, but with lightness.  The fact of all these levels mirrors what I love about the content; the slipping-away-ness of the sentence itself is very much like what it depicts—the impossibility of pinning down not just the state of madness, but any consciousness at all.

Lucy Corin is the author of the short story collection The Entire Predicament (Tin House Books) and the novelEveryday Psychokillers: A History for Girls (FC2).