This passage from Franz Kafka’s “The Judgment” doesn’t contain any gorgeous imagery or inventive metaphors. It isn’t particularly beautiful or interestingly crafted. While the phrase “on-the-spot representative” is quietly hilarious, the passage by itself is perhaps not very notable at all. Nevertheless, since I first read it two decades ago, this passage has stayed lodged in my brain. 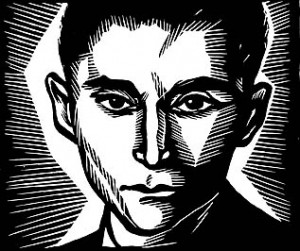 What has transfixed me is the startling effect the passage has in the context of the story. It is a sinkhole suddenly opening in the ground of the story. We fall through and find ourselves in an odd new place.

“The Judgment” opens almost banally. Georg Bendemann sits at his desk and gazes out the window at a nearby river. He has just finished composing a letter to a friend who has moved abroad. He had debated whether to tell this friend of his engagement, apparently wishing not to make his friend, who lives a lonely existence, jealous. Finishing the letter, he visits his father’s room. Up to here the story seems fairly straight forward. But the floor of the story begins to totter when the father, out of the blue, begs Georg not to deceive him. “Do you really have this friend in St. Petersburg?” he asks. Georg attempts to change the subject, but the father declares he doesn’t have a friend: “I simply can’t believe that.” The friend, so important before, has become a figment. A lesser writer might run with this as a twist, but Kafka bends the reality again—and again through dialogue—as the father declares that the friend, who he previously doubted existed, is in fact in league with the father in opposition to Georg!

We have left the realm of realism and entered a psychic struggle between father and son. “The Judgment”, like many of Kafka’s works, holds the power of dream logic without seeming like a dream. In a dream, your shoe might turn into pile of hissing snakes. It isn’t that the shoe was always snakes, but that the truth of the dream has shifted. In “The Judgment”, there is no single consistent truth about the friend in this story. The friend’s status, I believe, changes. It isn’t a “twist” in the classic sense of important information being hidden from the reader by the author—Ah! Didn’t you realize the whole story was narrated by the pet turtle?—but a shifting truth. A truth that changes not according to facts, but according to emotional logic. It is not a matter of what the absolute truth of the friend is, but of what power the father and son derive from the friend’s status in different moments.

And the friend’s status is not the only thing that changes. A parallel series of changes happens with the father’s physical body. At first, we are told the father is “a giant.” But as Georg controls the conversation the father shrinks to the point that he is carried in Georg’s arms like a small child. He can’t even stand up by his own power. Then, when the father reasserts his power verbally, announcing his secret partnership with the friend, he physically grows and stands “completely unsupported” kicking his legs at Georg. Having regained, in a very short span of time, his physical and mental powers, the father sentences Georg “now to death by drowning!” Georg feels himself “hounded from the room” by unseen forces and leaps into the very river he had gazed upon at the story’s start.

Most readers seem to expect fiction to have a single, stable truth. If it is a realist story, it must of course be “realistic” and have a certain objective truth. If it is a fantasy or science fiction story, readers expect a coherent world and consistent rules. Part of the genius of Kafka is his willingness to ignore those concerns. His stories are not worried about logical consistency or world-building, but in emotional and psychic power. They are peppered with moments, such as this passage, where the reality of the story crumbles around it and rebuilds itself with unexpected logic into something new.

Lincoln Michel was born in Virginia and lives in NYC. He is a founding editor of Gigantic magazine and the books editor of The Faster Times. His writing appears in Tin House, NOON, The Believer, BOMB, Oxford American, The Rumpus, Mississippi Review, McSweeneys.net, and elsewhere.