“I also was among the group beneficially beaten.”
-Robert Walser, “Knocking” (Selected Stories)

In the very short story “Knocking”, by Robert Walser, a narrator remembers an incident from his youth where a schoolteacher took students over his knee and spanked them for some misdemeanor. Of all the beautiful sentences out there, I choose Walser’s for one reason and one reason only: that glorious, oh so subversive adverb. 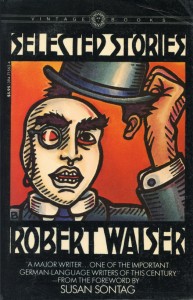 “Knocking” is well under three hundred words – practically a prose-poem, and yet there are more than a dozen examples of what by some standards is the greatest of literary faux pas, the “lazy” use of adjectives and adverbs. Others include “compliantly, harmlessly, completely, ironically” as well as “pretentious, timid, impertinent, and magnificent.”

But so much is said with that single adverb, “beneficially.” Beaten, I have been, yes. But I’ll assert it was for my own good, so don’t accuse me of complaining. I’m backed into a corner. Don’t hurt me. I have no options. And yet, who would mistake “beneficially” for anything but ironic? But when it comes time to level the accusation of insubordination (a faceless authority is often implicit in Walser’s stories), what evidence would the authorities have? He said it was beneficial, didn’t he?

The story is about a narrator who can’t stop the neighbors from banging on the walls. He must find a way to endure it in order to maintain his sanity, and this is why he recalls his boyhood thrashing. There are few things more powerless than living next door to a loud person — except, perhaps, being taken over your teacher’s knee.

WG Sebald, in his introduction to the novel The Tanners, described Walser’s tone as one of “anarchic politeness.” And knowing what we do of Walser, (always on the brink of poverty, a lifetime bachelor and wanderer who checked himself into an Swiss asylum for the last 23 years of his life), is it any surprise that, having no other means of resistance, he would find it in the exquisite irony, the insolence of adverbs?

Leslie Maslow’s writing has appeared in Open City, Anderbo, The Aviary and Tin House. She lives in Brooklyn and is currently a student in the M.F.A. program at Bennington College.