“Seven children squatted in a semicircle surrounding him in the middle of the railway footbridge, almost pressing him against the barrier, just as they had done some half an hour earlier when they first attacked him in order to rob him, exactly so in fact, except by now none of them thought it worthwhile either to attack or to rob him, since it was obvious that, on account of certain unpredictable factors, robbing or attacking him was possible but pointless because he really didn’t seem to have anything worth taking, the only thing he did have appearing to be some mysterious burden, the existence of which, gradually, at a certain point in Korin’s madly rambling monologue—which ”to tell you the truth,” as they said, “was boring as shit”—became apparent, most acutely apparent in fact, when he started talking about the loss of his head, at which point they did not stand up and leave him babbling like some half-wit, but remained where they were, in the positions they had originally intended to adopt, squatting immobile in a semicircle, because the evening had darkened around them, because the gloom descending silently on them in the industrial twilight numbed them, and because this frozen dumb condition had drawn their most intense attention, not to the figure of Korin which had swum beyond them, but to the one object remaining: the rails below.” —László Krasznahorkai, War & War, trans. George Szirtes

This is the second sentence of the novel War & War. The first, consisting of just twenty-three mostly single-syllable words, is more dramatic—its purpose, I suspect, to pull the reader into the narrative—a little getting one’s feet wet before the plunge. It works, too, but I have to say this second one made me twitch with absolute pleasure, in large part because of its length. Long sentences are like unpacking complicated gifts, gifts that often are not what they appear to be on the surface, and Krasznahorkai is a contemporary master of this kind of unwinding, begun, he once said, as a way for him to wrap himself in a shield of words that the (then) Communist state could not penetrate—not so dissimilar to the way Korin’s rambles protect him from the mini-thugs. 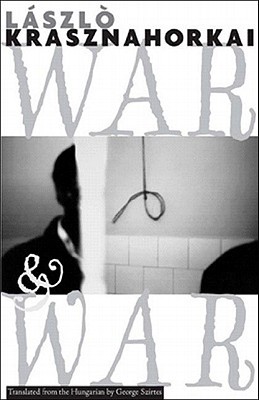 The next thing I love here is the situation: a guy is intimidated by children in a sort of reversal of roles that demonstrates simultaneously 1) his powerlessness and 2) his maintaining power by ignoring his tormentors, all contained in a single unit of thought. One of the other things about long sentences is there’s plenty of room for things to happen inside them; they’re little novels, in a way. And speaking of things happening, notice in this case how the pronouns shift from him to them, and also how the vision slides from being in the middle of things (with semicircles and halves, and twilight) to that last view of the “one object remaining: the rails below.” So this is a sentence that manages to waver between being vaguely threatening and comic, then ends on that ominous note of the rails below.

One of the other pleasurable things about any long sentence (in fact, almost a requirement for a long sentence) is that the whole thing be tied together by patterns of repetition. Here the repeated words are: rail, squat, semicircle, attack, point, and apparent, as well as all the pronouns. (Repeated sounds also hold long sentences together, but I’m not even going to try here because this is a translation.) Plus, there’s an unexpected bonus. Right after the tantalizing hint of “a mysterious burden,” comes the lovely moment smack in the middle of this sentence where the menacing children themselves are allowed to speak, to force themselves into the scene as if they are being interviewed (by whom?) about the quality of Korin’s monologue. Their verdict: “boring as shit.”

Finally, as is often true in the openings of many stories and books—although we can’t know this at the time we are reading it—the whole terrific novel that follows this will in fact be a digressive, tragic, and comic journey from here to “the rails below.”

So if you haven’t guessed, I’m a huge Krasznahorkai fan, and not only for his long sentences (the one I quoted is a baby compared to most) but also for the rigorous seriousness of his vision. “Heaven is sad” is the author’s epigram that begins War & War. Yes indeed, but it’s also heaven.

Jim Krusoe is the author of the novels The Sleep Garden, Parsifal, Toward You, Erased, Girl Factory, and Iceland; two collections of stories; and five books of poetry. He is the recipient of fellowships from the National Endowment for the Arts and the Lila Wallace Reader’s Digest Fund. He teaches at Santa Monica College and lives in Los Angeles.