A really long sentence in a paragraph of short-to-average-length sentences has an effect on the reader similar to that of a topspin lob in tennis: it changes the pace and adjusts the eye. Like a tennis player retreating to see if the lob will land inside the baseline, the reader waits with escalating anxiety for the sentence-ending period to arrive. 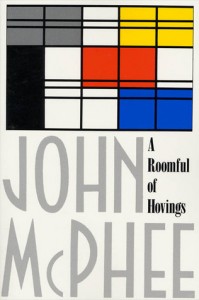 When, after two dozen or more words, the full stop still has not appeared, the reader begins scanning ahead—where is it? Is this some kind of mistake? Was that comma back there supposed to be a period? The tennis analogy is especially appropriate when the writer is John McPhee, author of Levels of the Game, a book-length profile of Arthur Ashe. However, it’s a sentence from another McPhee profile—of the food writer and forager Euell Gibbons, collected in A Roomful of Hovings—that recently caught (and held, and held) my eye:

Switching now from tennis to food analogies, you could argue that this sentence is gluttonously excessive. You could also say that the second half of the sentence devolves into nothing more that a menu list. True. But, within the context of the profile, the sentence serves several functions. The sentence comes in the first paragraph of a forty-page essay and its narrative—from job, school, and creative writing projects to the banquet laden with foraged food—mimics the progression of Euell Gibbons’ career. In the succeeding sentences, McPhee tells us that a literary agent who read Gibbons’ novel suggested that he “trim out the plot, characters, and dialogue” and “reshape the manuscript as a straightforward book on wild food.” The sentence does this in microcosm. Gibbons followed the agent’s advice and successfully transformed himself from a schoolteacher to a food writer “buoyant with royalties,” as McPhee puts it. Finally, this exorbitant and exuberant sentence is an appetizer. In its excess, it aims to give us a sense of the vast bounty of wild foods that are available to someone like Gibbons, who knows what to look for. Many of the foods mentioned in it turn up again later in one of the sixteen wild meals McPhee and Gibbons eat during their week together: dandelion hearts, Jerusalem artichokes, and wild garlic. And like any good appetizer, McPhee’s sentence makes you hungry for more.

Jon Michaud is the head librarian at The New Yorker magazine. His writing has been published in Iron, North American Review, South Dakota Review, Denver Quarterly, Fawlt, and other periodicals. He writes regularly for the Back Issues and Book Bench blogs on newyorker.com. His novel, When Tito Loved Clara, was published by Algonquin Books last year.

The Art of the Sentence: Christopher Isherwood