“True!—nervous—very, very dreadfully nervous, I had been and am; but why will you say that I am mad?” —Edgar Allen Poe, “The Tell-Tale Heart” 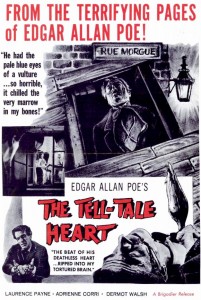 So the story begins with a single word that isn’t even a proper sentence: True! followed by that peculiar exclamation mark which addresses us, as if we have somehow been having a conversation with the narrator, and he (if it is a he) is just then responding to something we have said, but which, mysteriously, we can’t remember at all. And better yet, the “True” that begins this story, in a single word, creates a question: Is it? And can a story told by a writer pretending already to have been speaking with us when he hasn’t possibly be true?  So what is truth and what is fiction?

But not only is there an exclamation point here regarding something we have no idea about, it is followed immediately by a dash, the breathless heaped on the breathless, a vague excitement hanging above an abyss, and if certain composers can be recognized instantly by a combinations of notes they like to repeat (one thinks of Mozart), then this exclamation/dash combination has to be Poe’s calling card.

Now comes the word—nervous—meaning of course overly sensitive, or jumpy, or pertaining to the nerves, that part of the body which is responsible for, as John Locke would have it, all we experience in this world, that word surrounded by dashes, and then not one but two “verys,” again introducing in effect, another trademark of both Poe in general and this narrator in particular, that love of taking things far too far, of repetition. Then the very, very is wonderfully ratcheted up even higher with the word dreadfully, that might be apologetic, and probably is in this case, our first taste of a sort of obsequiousness (combined with grandeur) that is another trait of Poe’s, this word also hinting at something else: that of course is “dread.” Then nervous comes again, a repetition that gives us the grand total of four out of the first six words of this story doubled—not one, but two mirrors presented to us in the very first sentence. And then, because this is a first person narrative (conveyed so far only by its sheer emotional intensity) finally comes the actual “I” of the first person: I had been and am; —creating in that tiny phrase a virtual eternity of “I was and am,” as well as the odd, mixed tense of the story: a tale told in the present about the past.

So we are still reverberating from the explosion of that first “true,” followed by the rumble and stutter of all those commas and dashes, when miraculously comes a second explosion . . . but why . . . and next the thrillingly, exasperatedly italicized . . . will . . . and finally . . . you say that I am mad? This is so funny because we hadn’t said he was mad, 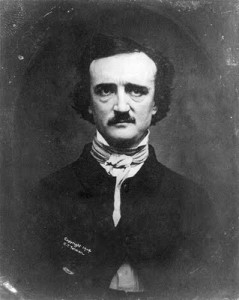 and therefore he must be mad to think that we had said it. But of course, on the other hand, that’s exactly what we do think when a person addresses us this way, that he’s nuttier than hell, so he is right, we were thinking that, and therefore he keeps his credibility. Remember the first sentence of “A Cask of Amontillado” (“The thousand injuries of Fortunato I had borne as best I could, but when he ventured upon insult, I vowed revenge.”), followed by: “You who know so well the nature of my soul . . . “ Poe is the tar-baby; once the story begins we are stuck to it, or rather, we pick up the story and it is his tarry fingers that reach out and touch us, and keep us there, and when we finish the story what remains are the smudges of having listened, usually to something forbidden, with too much enjoyment.

This reaching out, then is a line crossed often by Poe in fiction, but one that really belongs more properly in poetry, as when Keats speaks out of his poem, “This Living Hand,” which is worth quoting in its brief entirety, in part for itself and in part to remark in this context how Poe-like, minus the jingle-jangle of Poe’s rhymes, it sounds:

Of earnest grasping, would, if it were cold

And in the icy silence of the tomb,

So haunt thy days and chill thy dreaming nights

That thou wouldst wish thine own heart dry of blood

So in my veins red life might stream again,

And thou be conscience-calmed—see here it is—

I hold it towards you.

This poem is, movingly, the voice of a young poet speaking across two hundred years, and wanting to touch a reader’s hand directly, a gesture that fiction, in that trustworthy dog of the third-person, frequently refuses to make. So it is fitting that Poe (as in poet) who wrote both fiction and verse holds out this creepy hand to us.

Jim Krusoe is the author of the novels Girl Factory, Erased, and Towards You; two collections of stories, Blood Lake and Abductions; as well as five books of poetry. He is the recipient of fellowships from the National Endowment for the Arts and the Lila Wallace Reader’s Digest Fund. He teaches at Santa Monica College and lives in Los Angeles with his wife and children.