“At first Juliet did not understand what was meant.”

This sentence is a daughter’s reaction to her mother’s greeting after a long separation. Juliet’s mother, Sara, has just said excitedly, “We’re long and short, but still we match.” Her first words. No hello, no hug. No there you are, I’ve missed you. (It gets a little worse when you realize there’s a grandchild present she’s never seen.) 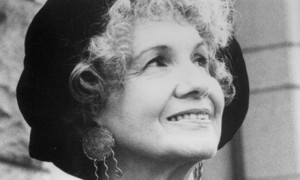 After a long moment, Juliet figures out her mother is talking about what they are wearing, their long and short black dresses, and a few paragraphs later Sara admits to worrying for days about what Juliet was going to think of her, dressed in black in the summertime. Sara, a desperate and nervous mother, is delighted to find her daughter also dressed in black and utters a nearly incomprehensible sentence in response, a sentence that calls attention to herself and yet is an attempt to unite them. Juliet collides with her mother in medias res, as it were, Sara already thinking too hard about every detail of the meeting as it pertains to her.

Munro might have composed the sentence this way: “At first Juliet did not understand what she meant.” I wondered for a long time why she didn’t. It flows a little better, it’s more obvious. But gradually I understood that she meant would encompass just this encounter, this scene, while was meant implies a long history. This has happened to Juliet before. Was meant is the thought of a person who has learned to be suspicious of subtext, and it tells us so much more about their relationship. In two words, Munro reveals the emotional standoff at the heart of the story.

Jessica Francis Kane is the author of a story collection, Bending Heaven, and a novel, The Report, which was a Barnes & Noble “Discover Great New Writers” selection and a finalist for the Flaherty-Dunnan First Novel Prize and the Indie Booksellers’ Choice Award. Her writing has appeared in many publications, including VQR, McSweeney’s, Granta Online, and The Morning News, where she is a contributing writer. A new story collection, This Close, will be published by Graywolf Press in March 2013. She lives in New York with her husband and their two children.