“I remember feeling a desire for Dana when she first appeared, when she paused in the doorway that second day of class and cast her eyes about the room, that was hard and pure, that contained me and could not be contained, and I remember making that bargain that people always make—anything for this thing.” — Jane Smiley, Age of Grief[1]

Out of all the sentences in the universe, it was not easy to pick one to write about. I was torn between lush Proustian, Woolfian, Ondaatjean sentences and something less ostentatious, maybe Charlotte Brontë: “Reader, I married him.” I think I get the best of both worlds in this sentence from Jane Smiley’s novella The Age of Grief. I can’t deny that my choice was also influenced by the fact that over twenty-five years after it was written, The Age of Grief is still probably the book more than any other that makes me want to stop strangers on the street like a gray-bearded loon, hold them with my glittering eye, and tell them they have to stop whatever they’re doing and read this story.

The quality of any sentence depends on its context, or if it does not—if it’s a great sentence on its own—we may suspect that it’s self-indulgent, exhibitionistic, and not so great after all. This sentence is on the last page of the novella; it had to be earned by the previous 75 pages. Also, it can’t really be separated from the sentence that follows: “No doubt it was the same bargain that Dana was making right then, at one in the morning, somewhere else in town.”

The most immediately striking phrase in the sentence—that one that most needs to be earned—is “that bargain that people always make,” that shift to a grand statement about “people.” Initially it would seem so much more credible to say, “I remember feeling that I would give anything to have her,” or “I would have given anything to have her.” The generalization dares the reader to challenge it, and surely many readers do challenge it and think to themselves: “No, actually I’d never make a bargain like that; I’d never sacrifice my marriage, my children, and all of our happiness for the sake of an affair.” 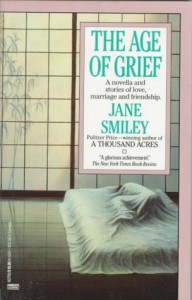 And yet the sentence convinces us: yes, this is what it means to be human—to make “that bargain that people always make.” How does it convince us? One way is how it circles around its subject. It starts from the point of view of an observer observing himself: not “I wanted Dana from the first time I saw her,” but the more distant “I remember feeling a desire…” Part of what he desires is her detachment and control, the way she “paused . . . and cast her eyes about the room,” which hearkens back to the very beginning of the novella, where Dave, the narrator, first describes Dana: “When she came into the lecture hall every day she would pause and look around the room, at all the guys, daring them to dismiss her, daring them, in fact, to have any thoughts about her at all.” He was attracted to her because she was not looking around to see what guy she wanted, but because she was passionate about becoming a dentist.

Of course the whole novella risks this great leap into generalization: not simply grief but “the age of grief”: “I am thirty-five years old, and it seems to me that I have arrived at the age of grief. Others arrive there sooner. Almost no one arrives much later.” Smiley risks an immense statement about what it means to be a human being, at least in our time, perhaps in any time: “Almost no one arrives much later,” meaning that absolutely no one fails to arrive sometime at the age of grief. Again, “that bargain that people always make.” The story challenges the reader to make the leap: Maybe not everyone makes this bargain, reader, but if you don’t, it’s not because you are morally superior. It’s because you are less than human.

The sentence goes from the relative detachment of “I remember feeling a desire …,” a phrase that can almost delude the reader into suspecting that Dave’s desire for his wife is all in the past, to a further level of abstraction with desire “that contained me and could not be contained,” describing an immense desire in terms that do not seem to express desire as much as they express a philosophical observation about desire that is reminiscent of the definition of God as a circle that has no circumference.

And then everything changes. More than anything, I think, it’s the rhythm of the last four words of the sentence—“anything for this thing”—that establishes their authority. Four strong beats, the final three unbroken: ANYthing FOR THIS THING. The tone is feral. The sentence that began with an almost meditative tone, as if it had all the time in the world to reflect on itself, ends with a drumbeat of urgency.

It would have been tempting to end that sentence with something more specific than “somewhere else in town,” but how could Smiley have done that? She could have said, “At one in the morning, at some Courtyard Inn with a watercolor above the desk.” She could have said any number of things, but any description at all would have sounded bitter and sarcastic, no matter how understated it was.

One of the great effects Smiley achieves throughout The Age of Grief is that the narrator never devalues his wife’s affair. Both Smiley and the narrator give it its due, and one of the ways Smiley does that is to keep the affair almost ethereal. All we know—all he knows—about the man his wife is in love with is that “maybe it was the musical director” of her choir, and when the family goes to see the performance of Verdi’s Nabucco, “there were certain notes that should not have ended, that should be eternal sounds in the universe.” That’s the despicable “other man”: someone who creates music that “should be eternal sounds in the universe.” In fact one thing Dave and Dana share, even in the midst of Dana’s affair, is their love of this music, their utter inability to resist its beauty any more than Dave could resist Dana or Dana can resist her choir director.

I’m still shocked every time I read the sentence, and I’ve been reading it for a couple decades. It has that quality that’s what we crave from great literature—it reveals the undercurrents of truth and passion that we didn’t know were there until it revealed them, or, rather, we knew they were there but we’d convinced ourselves we’d imagined them because no one else saw them or heard them—and suddenly there they are, and the voice of the narrator seems to fall a couple octaves and become the deep, compassionate, furious voice of grief itself: “that bargain that people always make—anything for this thing.”

Robert Thomas’ latest book, Bridge, is a work of fiction published by BOA Editions, Ltd. His first book, Door to Door, was selected by Yusef Komunyakaa as winner of the Poets Out Loud Prize and published by Fordham University Press, and his second book, Dragging the Lake, was published by Carnegie Mellon University Press. He has received a poetry fellowship from the National Endowment for the Arts and won a Pushcart Prize.

[1] I have put the title of the novella in italics rather than quotation marks as a small act of rebellion, insisting that The Age of Grief demands to be read as a complete work of art, not simply a “piece” in a larger book.