“The great thick remarks, all about housekeeping & domestic economy of some sort or other, the jokes, the masses of eatables, fm. the awful swine soup (tasting of nothing I cd. think of but the perspiration of the animal) and wh. the terrible mother forced me to gulp down by accusing me, whenever I grew pale and faltered, of not relishing their food, through the sausages, (liver sausages, blood sausages) & more, to the beer & wine, then the masses of odoriferous cheese, wh. I refused in spite of all attacks, entreaties and accusations, & then heard, oh horrors! with some what the feeling I suppose with which a criminal hears the judge pass a sentence of death on him,  – then heard an order given for some more sausages to be brought in to me instead, the air of religious earnestness with wh. the eating of the father was talked about, how the mother told the daughter not to give him so much wine, because he never enjoyed his beer so much after it, while he with his silver spectacles on pointing with his pudgy forefinger to the lines, read out of the newspaper half aloud to himself, – the immense long room with walls of dark wood, the big old fashioned china stove at each end of it &c, &c, all brought up the Taverne du Jambon de Mayence into my mind.”— William James

On March 4, 1868, twenty-six year-old William James, still many years from founding the science of Psychology and the philosophy of Pragmatism, blurted out that great long sentence in a letter to his brother, Henry, describing life among the patients at Fürstenbad, a real life Magic Mountain in Bohemia, where he was seeking a cure for his back. 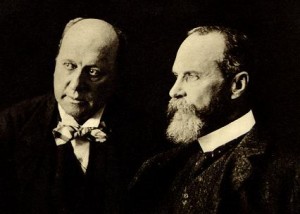 I love sentences like this – sentences that convey as much with rhythm and tone about the state of mind of the writer as they do about whatever’s being described. Henry, the future novelist, later became known for ripping off the occasional wing-dinger himself. I like Henry’s sentences in particular. They have a way of restraining themselves, of withholding whatever sense they’re going to make until you get to their very last word, a word that magically enables their entire contraption to click into place and come to life and lightly slap you on the face with whatever it is you’ve just been reading about for ten, twenty, or fifty lines. To be sure, there’s a long tradition of these kinds of sentences, even outside the James family. Whenever I realize I’m inside a sentence that’s going to go on for six or eight pages – in Patchen, say, or Sebald – I stop myself, go somewhere private, and make a point of reading the whole damn thing out loud to myself just to prove I can do it. See, motherfucker? I can read you.

Interestingly, William James’s early play with the long sentence didn’t make him a fan of complicated sentences, either in his own work, or his brother’s. On October 25, 1902, William exasperatedly responded to the general practice of sentences in The Wings of the Dove . “You have created a new genre littéraire which I can’t help thinking perverse,” he wrote, “for I read…innumerable sentences twice over to see what the dickens they could possibly mean.” William never got specific as to which sentences he meant precisely, but a few, admittedly, stand out as likely candidates:

He looked even not sure of what she would wish him to suppose on the subject of a kiss, yet also not embarrassed by his uncertainty.

It wasn’t that she disliked Aunt Maud, who was everything she had on other occasions declared; but the dear woman, ineffaceably stamped by inscrutable nature and a dreadful art, wasn’t—how could she be?—what she wasn’t.

Densher stood before as if he wondered what everything she thus promptly, easily and, above all, amusingly met him with, would have been found, should it have come to an analysis, to “take.”

William pleaded with Henry for their entire lives over this kind of thing. Henry never gave an inch. On May 31, 1909, just about a year before he died, William was left with no other recourse than to lovingly mock his brother with one more impossibly strained moment:

Partly it has been a “habit neurosis,” started by an initial uncertainty as to whether I might not set sail for Nauheim on the 22nd of this month, and a consequent desire to tell you the decision definitely when I should write, and followed by unreadiness to write anything at all, unless I communicated that decision, which in point of fact got postponed until the 19th, much to my present happiness in the way it fell out, for American country conditions agree with me very well, and the prospect now is that we shall be at Chocorua all summer. There! that sentence is worthy of one of your novels at its best!

J. C. Hallman is currently at work on a book on the correspondence of William and Henry James to be published by the University of Iowa Press. Among other titles, he is the author of The Devil Is a Gentleman, In Utopia, The Hospital for Bad Poets, as well as the editor of The Story About the Story.