So begins Chapter 5 of E. M. Forster’s novel The Longest Journey. For the first four chapters of the novel, Gerald has been gloriously alive. 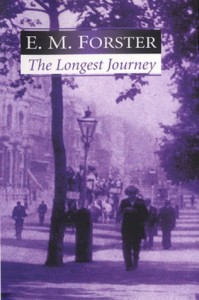 He has been hale and hearty. He has been vigorous and stupid. He has been nothing less than the embodiment of the English middle classes, detestable in his benignity and destined, it is presumed, to endure. Then Forster, with cruel casualness, kills him off. The suddenness of Gerald’s death is intensified, in the sentence, by the absence of the word “suddenly.” Its unexpectedness is intensified by the absence of the word “unexpectedly.” The sentence disturbs, appals. It disturbed Cynthia Ozick to the point of issuing this cri de coeur: “The suddenness of Gerlad’s presses so hard for Significance that Significance itself begins to give way, and wilts off into nothing more impressive than a sneer.” Which, I think, is exactly the point. And more to the point, a sentence as impressive, in its heartfelt grandiosity, as Forster’s is in its callous modesty.

David Leavitt’s novels and story collections include Family Dancing, The Lost Language of Cranes, Arkansas, The Body of Jonah Boyd, and The Indian Clerk, shortlisted for both the PEN/Faulkner Prize and the IMPAC/Dublin Prize. He lives in Gainesville, Florida, where he co-directs the MFA program in creative writing at the University of Florida and edits the literary journal Subtropics.