“Her look first grazed the tops of the displaced people’s heads and then revolved downwards slowly, the way a buzzard glides and drops in the air until it alights on the carcass.”
—Flannery O’Connor, “The Displaced Person”

This sentence describes Mrs. Shortley—one of O’Connor’s self-righteously wrathful wives-of-hired-men—taking her first look at a family of Polish refugees whom she sees will threaten her family’s status, power, and livelihood on the McIntyre farm. 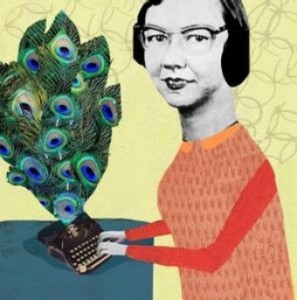 The sentence moves slowly at first, then speeds up the way a buzzard’s circles do, narrowing as the bird descends on what will be its meal. This is accomplished with a regular iambic meter, accelerated by anapests as the sentence extends. The sentence can, in fact, be lineated as a not-so-rough iambic trimeter:

Her look first grazed the tops
of the displaced people’s heads
and then revolved downwards
slowly, the way a buzzard
glides and drops in the air
until it alights on the carcass.

O’Connor’s comparison of Mrs. Shortley’s gaze to a buzzard settling on carrion gives a realistic and visceral sense of a critical and menacing “once over”; but the metaphor is also grimly comic. It’s no coincidence that the buzzard (funny word!) makes frequent appearances in cartoons. The sentence shows Mrs. Shortley’s buzzard-fear—”Something smells here; but is it safe to land?”—moving toward determination to destroy the Poles. In thirty-two words, O’Connor concretizes anger, fear, suspicion, and disdain, along with a lethal enmity that will claim several victims by the story’s end.

Charles Harper Webb was a rock guitarist for fifteen years and is now a licensed psychotherapist and professor at California State University. He has written five books of poetry, including Shadow Ball , and Liver, which won the 1999 Felix Pollak Prize. He lives in Long Beach, California.