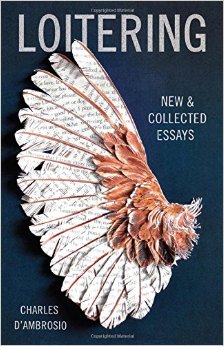 “At the risk of sounding parsonic, it seems to me we’ve ceded so much space to the expert and the confident authority that expressions of real doubt or honest ignorance are now regarded, in the demotic mind, as a kind of recreancy, a failure of loyalty, the sign of a faith betrayed.” – Charles D’Ambrosio, “By Way of Preface” (Loitering)

I read this sentence this year, so I can’t claim it as a well-worn favorite. But sometimes you come across sentences that are like cairns, evidence the trail continues, and you are so grateful to have found them. This was one for me. “Our doubt is our passion,” Henry James said of writers. It is a notorious passion to be stricken by, one that insists with equal force to be held and released. How does one keep faith not only among but in uncertainty? I suspect the answer cannot be asserted, but the question can be followed to courageous lengths. This sentence does just that. It treats style as a responsibility to its subject, and that subject is doubt.

“By Way of Preface” is the name of the piece you can find the sentence in. Is it an essay, preface? The work eschews any title or status, apt for a paean to a kind of skepticism and the essay as a form best suited to follow it. As D’ambrosio puts it earlier in the piece, quoting a gloss on Augustine, the essayist is “Seeking faith with doubt, that’s definition enough for me. Or strike faith, if you must, and leave it at seeking with doubt.”

And yet capturing the sinewy movements of doubt is tricky business. Like most things you know close-up, you almost never see it captured. You’ve got to follow its rhythms, involutions, and turns. Qualifiers abound: “it seems to me,” “at the risk of sounding parsonic,” a halting phrase that begins the semantic spin cycle into which the rest of the sentence is swept. Who, after all, might we expect to champion “real doubt” or “honest ignorance” less than a parson? The whole sentence joins this inversion: we’re in a world in which a faith betrayed is a faith kept, where recreancy is a badge of honor (If you had to look up recreancy, you’re not alone). This is the alchemy of the sentence. It repurposes the very tenacity of uncertainty, turning it into a kind of untrammeled dissent, an insistence. 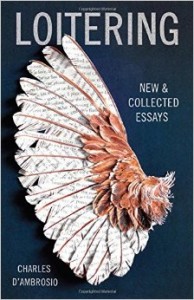 The very style of the sentence fights against the ceding of space it names – and against those to whom it is ceded, the experts. Space, a good word to use.The sentence itself seems to open a physical space, not where this encroachment of the expert is batted back (that would be too active, too certain) but where a kind of aporia, a safe house of doubt, can be preserved, within the defenses of style. The passive voice (“are now regarded”), the modifying clauses, protect the sentence’s meaning, as would a burrow, in which a hunted creature has gone to live, briefly unhounded by the worst of the world.

The ten-dollar words also stand guard. “Parsonic,” “demotic,” “recreancy.” You’ll know or look them up if you care enough, and if you don’t care enough: good, nothing to see here. They’re shibboleths, initiatory. (Later in the paragraph, D’Ambrosio hints at a small community elected by loneliness: “I would wonder, in my uncertainty, where all the other people are who don’t know, who don’t understand. Are we—the hesitant, conflicted—all alone?”) Recreant, from the Old French recreant – “defeated, vanquished, cowardly.” The adjective recurs throughout the collection, a notable repetition for such a brilliant stylist. In its dramatized obscurity, the word itself feels recreant. In its refusal to assert, the whole sentence does. It’s as if it were playing dead, to be ignored by the marauding armies who mistake the prone for the defeated.

Discussing the essays of M.F.K Fisher earlier in the essay, D’Ambrosio writes, “…soon enough it was the language itself, and more specifically, the right she assumed to be exact about her life, that won me over completely.” This is what won me over completely in this sentence, essay, and collection: the exact, which supports the blind reachings of doubt, like a spotter in gymnastics. I will return to this sentence when I need to remember why and with what care one writes.

Jacob Rubin’s first novel, The Poser, is now available from Viking. His writing has appeared in the anthology Best New American Voices, www.newyorker.com, New York magazine, Slate, The New Republic, n+1, and The Cincinnati Review. Times Square, a screenplay he co-wrote, was recently acquired by Focus Features. He lives in New York.