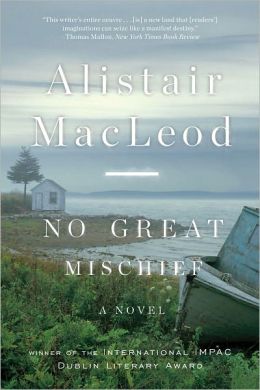 “The tide was going out when they vanished, leaving nothing but a lantern—perhaps tossed on to the ice by a sinking hand and miraculously landing upright and continuing to glow, or perhaps, set down after its arc, wildly but carefully by a hand, which sought to reach another.” —Alistair MacLeod, No Great Mischief 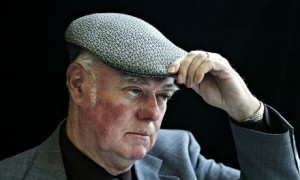 Alistair MacLeod, who died in April, wrote just one novel, 1999’s No Great Mischief.  Like his short stories, collected in the US under the title Island, the novel is distinguished by his elegant, humane prose. We’re accustomed to talking about literary pyrotechnics in terms of complicated syntax or elevated diction, but MacLeod’s work is often dazzling in its simplicity, each perfectly composed sentence buttressing the next, landing in rhythm as musical as the Gaelic songs his characters sing.

This sentence describes the deaths of three people who drown one evening while walking across inadequate ice to their lighthouse home. The lanterns they carry on their journey are visible from shore, so that the accident is witnessed by their family and, indeed, an entire community that knows them.  Two lanterns go dark, and a third remains lit, a ghostly, mysterious beacon.  The community waits with held breath as rescue parties set forth, not knowing what they’ll find. In this sentence, the rolling, swaybacked sequence of clauses bridged by alternately dark and hopeful words—perhaps; sinking; miraculously landing; perhaps; wildly; carefully–imitates the swinging of the lantern at the moment the ice breaks as well as the emotions of the family as they watch, wavering between optimism and the early, shattering intimations of grief.

In MacLeod’s work, the landscape of Cape Breton exerts a constant, unflinching force. While describing its specific beauty he is never sentimental about its hazards or its hardships. It’s not a backdrop to human life but the condition of it. So the sentence starts with the ongoing, ineluctable action of the water—“the tide was going out.” And it ends with a single, finite human gesture—the hand reaching out for another—which is typical of the way his characters live and work and survive together. His people are often beleaguered, but they are never alone.

Tellingly, the sentence also describes with shivering precision an event that the book’s own first person narrator has not seen. The narrator’s parents and brother die when he is a child; too young to have witnessed or comprehended it, he learns about it from his other brothers and the grandparents who raise him. But they have told him the story so vividly that he can describe it as if he were there.

The narrator is a figure whose position appears over and over in MacLeod’s stories—the child who (like MacLeod himself, who left a family of miners and fishermen to become a university professor) escapes the harsh conditions of home. He is always exploring the complicated privilege and burden of being the one who survived, the one who went away. And he captures the way that landscape continues to dominate the lives of its characters even after they leave—off to be university professors or doctors or lawyers, off to the city, off to the shifting present—like a lantern that keeps shining after the person holding it is gone.

I first read No Great Mischief while I was in graduate school in Texas, amid a landscape about as different from Cape Breton as you can find, and I felt transported—somehow deeply homesick for a kind of life I myself had never led. The experience was emotional, intense, though not maudlin. As an expatriate Canadian, I’m often guilty of romanticizing my home, but MacLeod’s work doesn’t encourage that; though it often looks to the past, addressing love and loss, its gentle, steely tone is a curative for nostalgia.

What I learned from MacLeod, in reading both No Great Mischief and his stories, is how a writer makes a territory his own, and how endlessly he can plumb it. Macleod’s work never sought variety. Over and over again in his stories, the same characters appear—the bookish child, the doomed or alcoholic brother, the grizzled father, the stern, strong mother or grandmother. Relatives who are lost but remembered. They are clan attributes that recur across generations, like red hair. Taken together, his work resembles a genealogical ancestry, a branching, connected family tree.  Story after story, sentence after sentence, the family fractures and reassembles itself into recombinant DNA, the particular gene sequence MacLeod both inherited and made his own.

Alix Ohlin‘s novel Inside was a finalist for the Scotiabank Giller Prize and the Rogers Writers’ Trust Prize. Her work has appeared in Best American Short Stories, Best American Nonrequired Reading, and many other places.