“In spite of my fear of him, that made me whiter than my wrap, I felt there emanate from him, at that moment, a strench of absolute despair, rank and ghastly, as if the lilies that surrounded him had all at once begun to fester, or the Russian leather of his scent were reverting to the elements of flayed hide and excrement of which it was composed.”—Angela Carter, “The Bloody Chamber” 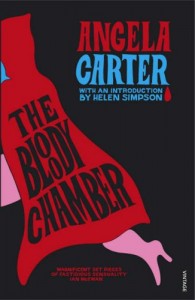 When I teach this story, I never get tired of talking about this sentence with the students. It’s the climactic moment of her Bluebeard retelling, where the man who is the Bluebeard figure has just realized his new bride has gone into ‘the bloody chamber’ and discovered his secret violent and horrific history of murder. He sees that she knows, and he is filled with despair, and to articulate the “stench” of his despair, Carter goes to these images. The first half of the sentence sets up what’s happening, and in the second half her wizardry occurs.

Up until this point in the story, the lilies and the Russian cologne have been repeating sensory elements- the perfect, calm lilies floating in jars, creepy but whole and crisp, and the scent manly and muscular and erotic. But in this sentence, the whole story turns. First, the lilies “all at once” are festering. A sense of rot has started to take over what has seemed like an unaging and perfect mansion of wealth and impenetrability, one that until this moment has resisted the natural process of time and decay. Her word choice is so perfect in fester, in the relishing of that ‘st’ sound, the edgy dragging out of the rot. The jig is up. His mask begins to fall. But rot might be what we expect— from perfect timelessness and control to the regular rules of the organic—and Carter does not leave it there. She goes a crucial step further with the end of the phrase by deconstructing his scent entirely, in this sentence that just pours over with references to smell. Unlike the lilies, the scent is not rotting—can’t rot; it is “reverting”. His front of ultra-worldliness returns to its origins, goes to back to its root of flayed hide and excrement. Flayed hide? (Worth saying aloud—such good sounds again!) The skin of the cow that has been removed and beaten, hinting at a previous history of violence, one of the sure roots of his despair. And that’s not enough– it’s not just the flayed hide, the cow’s body evoked, but there’s another smell, the shit. The sophistication of his scent has dissolved into nothing but beaten skin and shit. The presence of excrement, though, doesn’t come across as disgusting so much as primal, core, unfancied, factual, harsh with consonants– the most base and organic expulsion of the cow, revealed, as he has been revealed to her. There he is, exposed, stripped to the core of his broken humanness and his animal self, his shit and his pain, what is grotesque and also what is just truly unmasked, and this is how she lets us know. Pure gorgeousness.

Aimee Bender is the author of 4 books, the most recent being the novel The Particular Sadness of Lemon Cake. Her short fiction has been published in Harper’s, Granta, Tin House, GQ, the Paris Review, and more, as well as heard on PRI’s This American Life.  She teaches creative writing at USC and lives in Los Angeles. She will be teaching at this year’s Tin House Summer Writer’s Workshop.