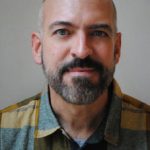 Paul Lisicky is the author of five books: The Narrow Door (a New York Times Editors’ Choice), Unbuilt Projects, The Burning House, Famous Builder,and Lawnboy. His work has appeared in The New York Times, The Atlantic, BuzzFeed, Conjunctions, Ecotone, Fence, The Offing, Ploughshares, Tin House,and in many other magazines and anthologies. A 2016 Guggenheim Fellow, he has received awards from the National Endowment for the Arts, among others.