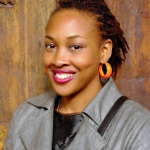 Naomi Jackson is author of The Star Side of Bird Hill, published by Penguin Press in 2015. The Star Side of Bird Hill was nominated for an NAACP Image Award and the Hurston/Wright Legacy Award in Debut Fiction and long-listed for the National Book Critics Circle’s John Leonard Prize and the Center for Fiction’s First Novel Prize.  It won Late Night Library’s Debut-litzer prize, was named an Honor Book for Fiction by the Black Caucus of the American Library Association.