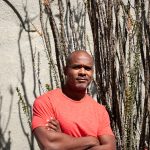 James Hannaham wrote the novels Delicious Foods, which won the 2016 PEN/Faulkner Award, the Hurston/Wright Legacy Award in Fiction, and the Morton Dauwen Zabel Award from the American Academy of Arts and Letters, and was a New York Times and Washington Post Notable Book of 2015, and God Says No, which was honored by the American Library Association. He has published stories in One Story, Fence, Story Quarterly, and BOMB, and one in Gigantic, for which he won a Pushcart Prize.