Termites never sleep. From birth until death, they eat nonstop, consuming plant-based cellulose in felled and decaying wood. They rarely kill living trees. The matter they digest is returned to the soil as nutrients.

My first winter in New Orleans, I took my coffee on the front stoop. There was a small corner bakery across the street, where familiar but nameless faces dined at tables along the curb. From my steps, I listened with a lazy ear.

One morning, my mother called me. She never calls.

“I have to talk to you,” she said.
“Is it depressing?” I asked.
“Why do you say that?”
“Because whenever you call it’s something depressing.”
“Your grandmother had a stroke. She’s in the hospital.”

My grandmother was a woman who was arrested at age 86 for protesting unfair labor practices. In the 1970s, she organized fundraisers for the Black Panthers, with whom she not-so-subtly implied she had had affairs. After her husband left, she spent decades as a social worker for drug addicts and the homeless.

As my mother explained the fallout, I noticed a pile of leafy debris collecting on the top step where I sat. Papery slivers snowed down from the jamb and architrave of the door. Termites, I grimaced, as I swept away the pile.

The next day, my friend Holly invited me to the insectarium. We packed her son Zion into his car seat and headed for the Quarter. Inside, he scuttled from one terrarium to the next, falling and picking himself up. When he took an interest in the leaf-cutters, Holly read him the description in a slow and even tone.

They left me behind in the termite room. A whole room dedicated to the termites. I read about New Orleans’s dueling species: the eastern variety, indigenous to the city, and Formosan subterranean termites, which arrived on ships returning from World War II and spread along the Gulf Coast.

Eventually, Zion rescued me from my own distraction. Taking my hand, he led me through the Louisiana Swamp Gallery to a verdant artificial garden. Arias of brightly colored canaries were locked in a cages along the wall. Holly stood on a plastic bridge and butterflies filled the air. An immense azure morpho landed atop her head. She knelt down to show Zion its palpating wings.

On the drive home, Zion kicked off his shoes, ready for a nap. I thanked Holly when she dropped me off at my place. As they drove off, I noticed another pyramid of flakes gathering atop the stoop.

Formosans termites aren’t deterred by obstacles that keep other species away. They circumnavigate plastic barriers and concrete walls, building tunnels 300 feet long. Using a mixture of chewed wood, mud, saliva and excrement, they can build nests in trees and the walls of buildings. I texted a picture of the refuse to my landlord.

Up close, a termite is a pale, vile-looking creature. Workers are about the size of a grain of rice, with distended, semi-translucent bellies. They pile hungrily atop one another, eating then returning to the nest to regurgitate their meal. Their nature is so ingrained that death is their only respite.

My mother moved from Los Angeles to New York after graduating college. Her parents had separated while she was at college and she needed to put a nation between her and her family. She met my father at a party in Manhattan and they have been together since.

Four decades later, my grandmother took a fall and was no longer able to live on her own. She left the fragrant L.A. apartment where she had lived for thirty years and moved to the East Coast to live a tiny cube half a block from my parents’ house.

Sitting on my stoop the morning after the insectarium, I remembered when I was a boy, my grandmother took me to an artist friend’s studio. She chatted with her friend, a longtime student and friend of Sol LeWitt, as I wandered around the palatial studio filled with paintings that pictorially represented musical rhythm and meter. This woman had spent her life creating these meticulous colored grids. I put my coffee down on the steps and went to buy a ticket home.

When I arrived at the hospital, Lois sat upright. Looking me in the eyes, she spoke complete nonsense. The grammatical order of her sentences was strangely intact, but verbs and nouns slipped into place arbitrarily like a shot machine. Cogency was a jackpot unstruck. As I listened, I wondered where the strong, articulate woman I knew had gone.

In the weeks to come, she would grow worse. The doctors had found two additional brain bleeds. Her speech became more fragmented and her moods more aggressive. She hissed vitriolic profanities, accusing her nurse of trying to poison her. She tried to escape. One day, she smashed her window with a large wooden soldier.

The doctors admitted that she would not regain her faculties. Her body was intact, but her mind was gone. My mother fought with my father and her brother about what to do. Her exasperation spread. Regardless of the bravery with which my grandmother had lived her life—in a century of improved health care and elongated lifespan—she had ended up trapped in a hellish, half-living state.

In the days after I returned to New Orleans, Holly called me. She had gotten a sitter for Zion and would stop by mine on the way to work. She walked through the doors with a woven hive atop her head. Sitting on me as if the place her own, she lit a joint. The smoke mixed with a sweet alchemy of lotions and floated upward to the ceiling.

She told me that it was going to be a good night at the club. It had poured the day before and she was on her period. “It always rains at the club when you’re on your period,” she explained, passing me the joint.

She told me about the first May that she came to New Orleans, long before she had started dancing at Barely Legal. She had spent the last of her savings on the rent and a new, white duvet. When her boyfriend, now ex, had forgotten to shut the window at night, alates filled the apartment. They covered her new duvet in a mountain of wings. I couldn’t imagine Holly afraid.

Exterminators use acoustic emissions detectors to locate termites. As termites eat, they tear the fibers in the wood. The devices recognize the tearing by its unique frequency without having to penetrate the wood. Wishing Holly a good night, I put my ear to the door’s frame. There was only silence. 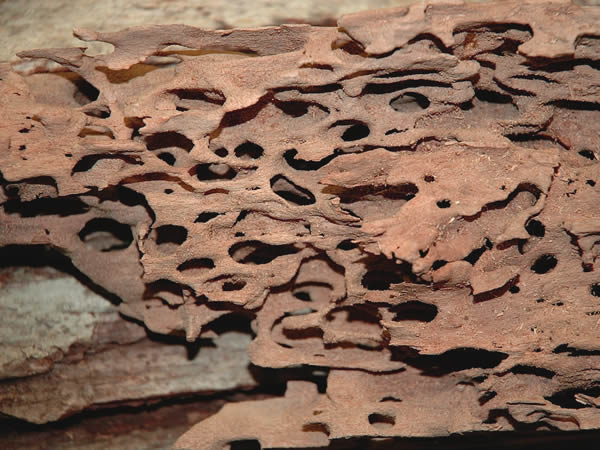 Before moving to New Orleans, I lived in New York and thought I would never leave. The movement of the city was my home: a constant rush of bodies repulsed by each others’ magnetic fields— evenings at Film Forum, Thursdays night drinking at the galleries in Chelsea, Saturdays going to the farmer’s market with Peter and Oliver. Now, like my mother before me, I had left the place of my birth to start anew on a foreign coast.

Some say New Orleans is a profoundly European city: a bouillabaisse of French, Spanish and African culture. To me, it felt like a small town. My neighbors said hello, a small garden started to form in front of my house, in the evenings I watched the sunset over the Mississippi.

One morning, I woke up to another call from my mother. I took it out on the stoop. She told me about my grandmother’s further decline. She had full-time care at her apartment, but was growing more violent. Lois had bit my mother’s hand and made her bleed. My uncle wanted to put her in a home, which would mean losing all control over her care.

In a fragile tone, my mother explained that there were two parts to my grandmother’s pacemaker. The pacemaker itself, which uses electrical pulses to prompts the heart to beat, and an implanted cardioverter defibrillator, which shocks the heart when its rhythm becomes erratic. While the former must be left on, hospice explained, it is legal to turn off the latter.

After my mother hung up, I went to Marie’s Bar for a drink. Holly was behind the bar decorated with regulars. She handed me a Highlife and Muddy Waters played on the jukebox. It was a Monday, so there were homemade tamales.

As one of the regulars started a story that everyone had heard before, Holly came over to chat. She told me that Zion was spending the week at her mother’s place. That things had been good at the club. She asked about the termites in my apartment. It was getting worse, I told her.

When I got home, I stopped in front of my apartment, half drunk, half hypnotized. Flakes had once again started to collect around the mullion. Hungry and hidden, the termites were the inextinguishable spirit of the house—a beautiful and complex system of workers and warriors, alates and queen. And just as the house had come from nothing, it would eventually return to the dirt, silently taking with it the stories of those that had lived inside.

Jacob Kiernan is a writer and editor living in New Orleans. He is currently writing screen plays. Follow him on Twitter @JacobKiernan.

To Vanquish the Patriarchy